Oliver has had a copy of the Canadian edition of The Dangerous Book for Boys on his bookshelf for many years; long enough that I don’t recall how it got there.

On Tuesday night, needing something to occupy his mind at bedtime, he pulled the book of the shelf and transcribed the names of every author listed in a section called “Books Every Boy Should Read”: 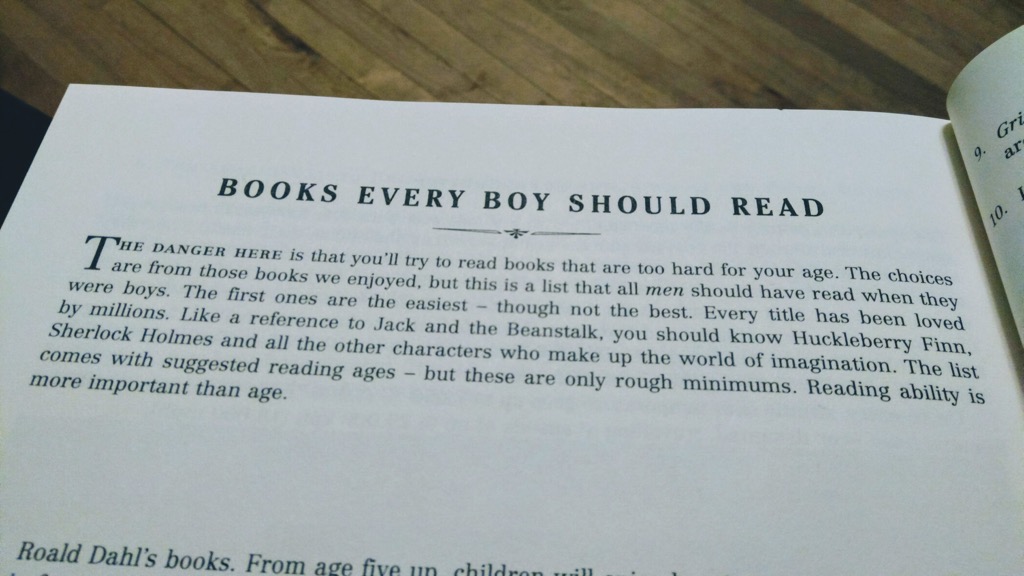 On Wednesday morning, as I was helping him wake up, I scanned the list to see which authors were included and was annoyed to find that, in the several pages of books listed, only two of the recommended books were written by women: the Famous Five books by Enid Blyton and the Harry Potter books by J.K. Rowling.

Every other book was written by a man.

So The Dangerous Books for Boys is dangerous in ways that transcend “Making a Bow and Arrow” and “A Brief History of Artillery.”

I suppose I shouldn’t be surprised: the book, after all, has sexism baked right into the title.

But surely, even in the broken world of “only boys can be interested in fossils and orienteering,” there must be a sliver of realization that reading books by written by women is important and useful.

What books should appear in the erratum?

The famous five.....I read all of those in primary school here in NL. Loved them.

The Women's Room by Marilyn French

I started with Anne of Green Gables and Little House on the Prairie. Haven't looked back.