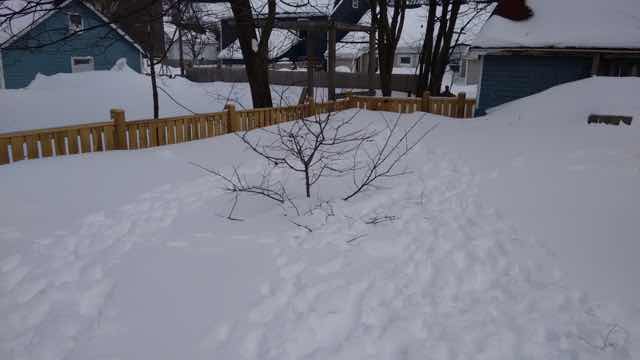 That’s a 5 foot fence, to give you a sense of the how deep the snow is.

And that’s a tree, not a bush.

And so we ended up with a lot of snow on our roof.

By Friday afternoon we started to fear that the ice dams would result in water getting into our house, and so it was time for evasive action.

Catherine made a round of calls to teams of shovelers that we’d used before, but we were not alone in our plight and they all replied with “maybe we can get to you by Monday.”

Plan A: Find the Ladder

It would make sense to keep our extension ladder inside the house so as to be accessible for times like this. And so, of course, we did not do this. And so the ladder was – the theory went, anyway – out in the back yard under the aforementioned 5 feet of snow.

As it was still somewhat mild and the snow somewhat malleable on Friday evening, I headed out with a shovel in hand on an archeological dig along the right side of the yard.  I dug two very deep holes and came up empty. If the ladder was down there, I didn’t find it.

I did, however, manage to give myself a mild wrist sprain.

It goes without saying that our roof rake was in the back shed, similarly inaccessible.

Plan B: Buy a Ladder

With Friday night’s ladder-finding a washout, on Saturday I suspended all normal market-going activities and headed out to find a ladder, a roof rake and some ice melter.

Sherwood Home Hardware had a very nice ladder, but no roof rake, so I bought the ladder, squeezed it into the car, and headed on to Kent Building Supplies in the suburbs to see if they had any roof rakes.

But, thankfully, Sherwood BMR did, and the staff there proved remarkably helpful to boot.

The roof rake, I am happy to report, is the king of all the roof rakes: made by Garant it’s called the Yukon and it has several advantages over the roof rakes we all know and loathe: first, it’s got an oval-shaped main shaft, which means that even at fully-extended length it’s remarkably stable; second, its handle is telescoping, so there’s no losing the extension arms, and making it longer and shorter is an easy “press the button and slide in and out.” I heartily recommend this rake to anyone who needs one.

This Old House recommends filling old pantyhose with salt and placing them on ice dams to create channels for water to flow out. As the alternative was going at the ice dams with an axe, I decided to try this out.

But nobody in our house wears pantyhose.

So I sent Catherine out to find some, and she ended up buying out the dollar store’s entire inventory, at $2 a pair.

Married with the ice melter I bought at Home Hardware, I was ready to go.

Target One: The Vestibule

I decided to start with an easy win. Our front vestibule, as you can see here, had its own share of snow on it: 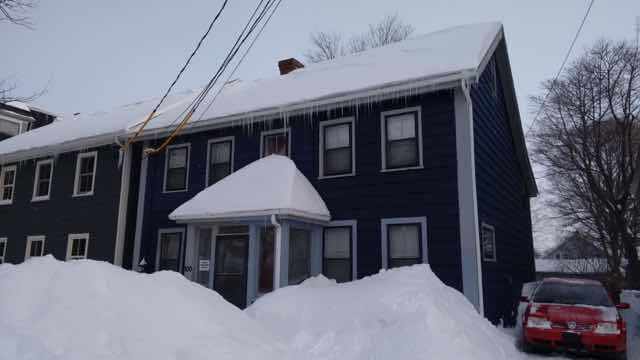 So, armed with the roof rake, I went to town.

It took about 30 minutes, but the roof rake proved up to the task, and I had the vestibule roof down to bare shingles when I was done.  I sprinkled some ice melter in the gutters to judge its effectiveness, and moved to the back mud room.

At this point the photographic evidence is rare, as I was in the throes of work.

We have a mud room off the back of the house that’s about the same size as the vestibule at the front, but with a flat roof with a very gentle slope. So it accumulates a lot of snow. It also happens to be an excellent staging ground for attacking the snow-laden back roof the house, so it was my next target.

This was a bigger job because there was more snow, because I needed to use the new ladder, in stepladder-mode, to get all of the the snow off, and because I had to stop and shovel the snow off the back deck regularly to keep the back door clear and to give me room to work.

But after an hour or so, the mud room roof was clear, and I was ready to move higher and riskier.

Intellectually, I am not afraid of heights. But when faced with a task like “hop up on that slippery roof with some sharp implements and do some physical work to which you are unaccustomed” I was given some pause.

But I forged on.

With the roof rake I was able to pull a fair amount of the snow from the edges of the back roof, but I couldn’t reach very far up the roof, and I couldn’t really do anything about the ice. So I sucked up my courage, climbed up the ladder, and gingerly shimmied up the mud room roof.

Once I got to the back roof’s edge, I was in a good vantage point to pull off a lot more snow, and to go all This Old House on the ice dams.

What ensued was a 4 or 5 hour adventure of rake, shovel, scrape, pantyhose + salt, wait, rake, etc. In the end I was only able to make the barest dent in the mountains of snow and ice, but at least it felt like I was doing something.

Because of my all-consuming attention to snow and ice on Saturday, I’d neglected to go grocery shopping, so the house was left without eggs, which meant no Sunday morning waffles. Something that Oliver made sure I knew about: 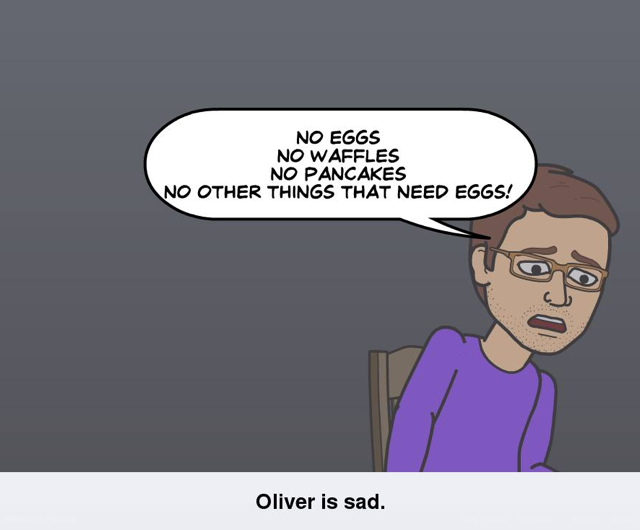 Waffleless, I returned, nonetheless, to the snow and ice battle.

I made a little more headway on Sunday afternoon on both the back and front, but we were already starting to see some water in our front and back second-floor bedrooms – not great torrents, but enough to be worrisome – and so we concluded that it was time to return to the task of finding professionals.

Catherine made another round of calls, and managed to find a couple of teams that could at least come and “take a look” on Monday morning.

And then our PEI Mutual Insurance claims man made a courtesy call – we’re not covered for ice dam damage under our home insurance policy, but we’d called anyway and he offered to drop by. It was, he told us, one of a number of similar calls over the weekend, and we took some solace in the fact that we weren’t the worst house he’d seen that day. He made a few recommendations for additional help – Ford’s Mobile Wash might be able to steam the gutters, for example – and went off into the night.

At this point I reached out to my friend Mehrnoosh, who’s much more plugged into the Charlottetown-area trades than we are, to see if anyone he knew might help us out.

He immediately sprang into action and by Monday morning at the crack of dawn he had a crew of pros lined up and due to arrive at the house at 9:30. Which they did.

And they sprang to work.

On the front, they started with this: 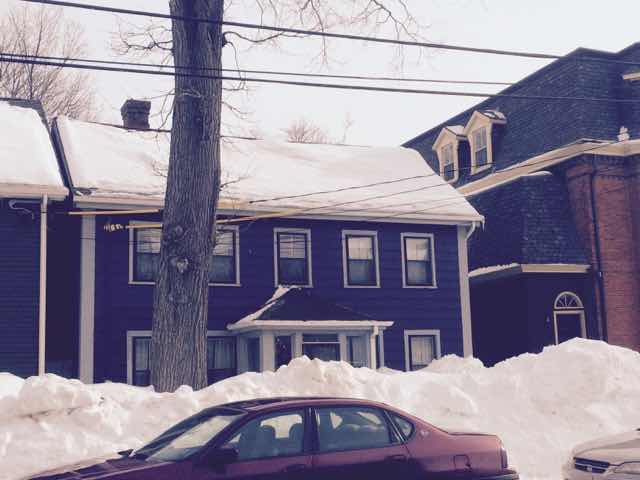 and, midway through the job, it looked like this: 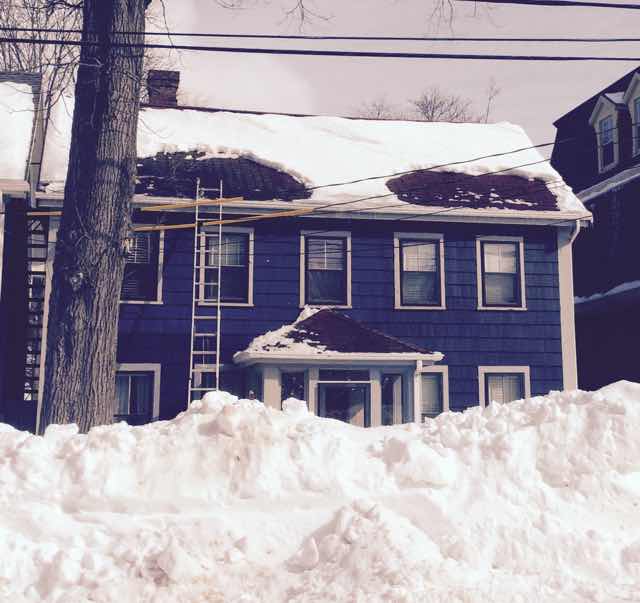 And by mid-afternoon, our back roof was in much better shape too: 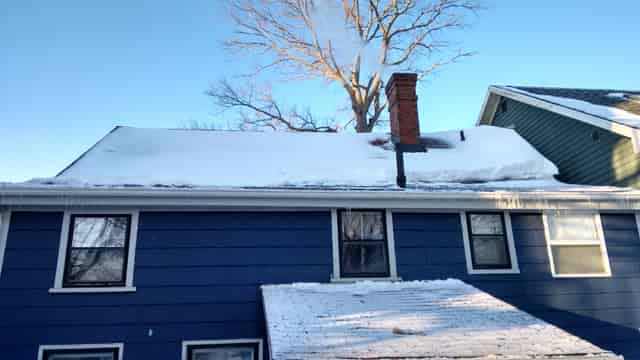 It’s hard to get a sense from that photo of just how dramatic an improvement that was from the situation they started with, but here’s what the mound of snow and ice they removed – or at least part of it – looked like on the ground: 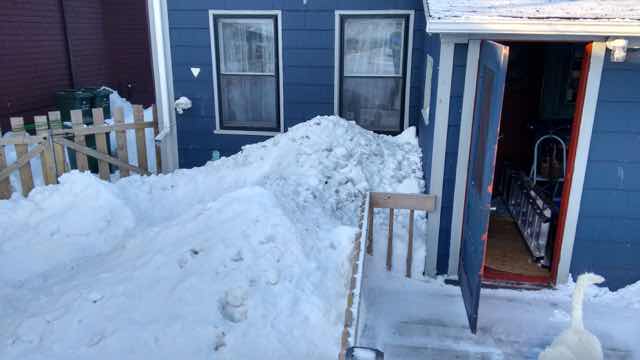 In the end they were on the roof from about 9:30 a.m. to 1:30 p.m. with two teams, one on the back and one on the front. Both sides are clear of snow now, and they axed out a large part of the ice dam too.

Did the This Old House technique with ice-melter-filled pantyhose actually do any good?

It’s hard to tell. There was certainly some ice-melting that resulted, but when I compare the amount of effort needed to buy and haul the bags of ice melter, to assemble the melter-filled pantyhose legs, and to get them up on the roof, it wasn’t worth the effort: they made a tiny dent in a problem that needed a substantial solution – removing all the ice and the snow that was driving the ice. We might have received an few hours of water infiltration freedom by redirecting some of the water, but I was only able reach about 1/10th of the gutter surface, and to fully implement this solution would have required 10x more ice melter, 10x more pantyhose, and a lot more ladder dexterity.

So it’s not an exercise we’re likely to repeat.

Where to from here?

With more snow coming later this week – and winter not over, practically speaking, until April? May? – we’re at least better-equipped to deal with the situation now: I can clear the snow with the monster roof rake after every storm and, touch wood, that should be enough to keep new ice dams from forming.

Once winter’s over, this will be the summer that we address the larger issue, perhaps raising and changing the pitch of the back roof, getting a new roof on the entire house with a water barrier, and adding insulation and venting where it needs to go.

It's hard for me to believe that I may have preceded you in this experience, what with you up in Oh, Canada, and having bought your house before we did, but I feel like I was exactly where you were when we lived in Wisconsin, and I still feel a pang of nostlagia for the roof rake I left behind when we moved west, because it made me feel so empowered, adult and in-the-know to buy and use it (Roof rakes? Who knew?). Likewise, searching the Youtubes and ThisOldHouse for answers. It makes no sense at all, but I kind of miss the snowpocalypses. BTW I think the salt stocking trick must rely on melting and really only work when the temperature is wobbling around freezing--which is sort of the only time you need to worry anyway, with regard to ice dams plying roof parts apart. You know, for next season anyway, you can pick up a plug-in electric cable to run clip along the eves of your house to melt the snow. We had one we never used in Wisconsin, and I bought one just last year at Home Hardware in Toronto.