On Wednesday night I had some errands to run: I needed a carbon monoxide detector, some light bulbs, some vitamin D, and some throat lozenges (the latter because I was feeling a cold coming on, a cold that did, indeed, come on like a freight train on Thursday).

In the normal course of affairs I would have run these errands by getting in my car, driving out to Canadian Tire for the CO detector and the light bulbs, and then stopping at Shoppers Drug Mart on University Avenue, on the way back, for everything else.

But, as it happened, earlier in the day on Wednesday I’d received word from Home Hardware that they’d taken me up on my suggestion of installing a City-incentivized bicycle rack; not only did I want to show Home Hardware some love for doing this, but Home Hardware also happens to be a much easier cycle from my house downtown than Canadian Tire, and Murphy’s Parkdale Pharmacy, which is on the cycle home, has excellent bicycle parking too. It also happened to be a nice night for cycling, before a forecast Thursday storm. So the die was cast.

There are a bunch of ways to get from 100 Prince Street to Home Hardware: the most direct involve Longworth Avenue/St. Peters Road or Kensington Road; I hoped that I could avoid the hill involved in either of those routes, and also avoid some car traffic, by taking the Riverside Drive multi-use trail out to Garfield Street and then cutting west to St. Peters Road.

It turned out that Garfield Street too has something of an incline, so I wasn’t able to completely avoid hills. But it was a nicer cycle ride, so I’m happy I went that way; the ride through the Roman Catholic Cemetery was particularly atmospheric, as the lights and candles on the graves made the route feel like a magic realism shortcut into another dimension. Which perhaps it was. 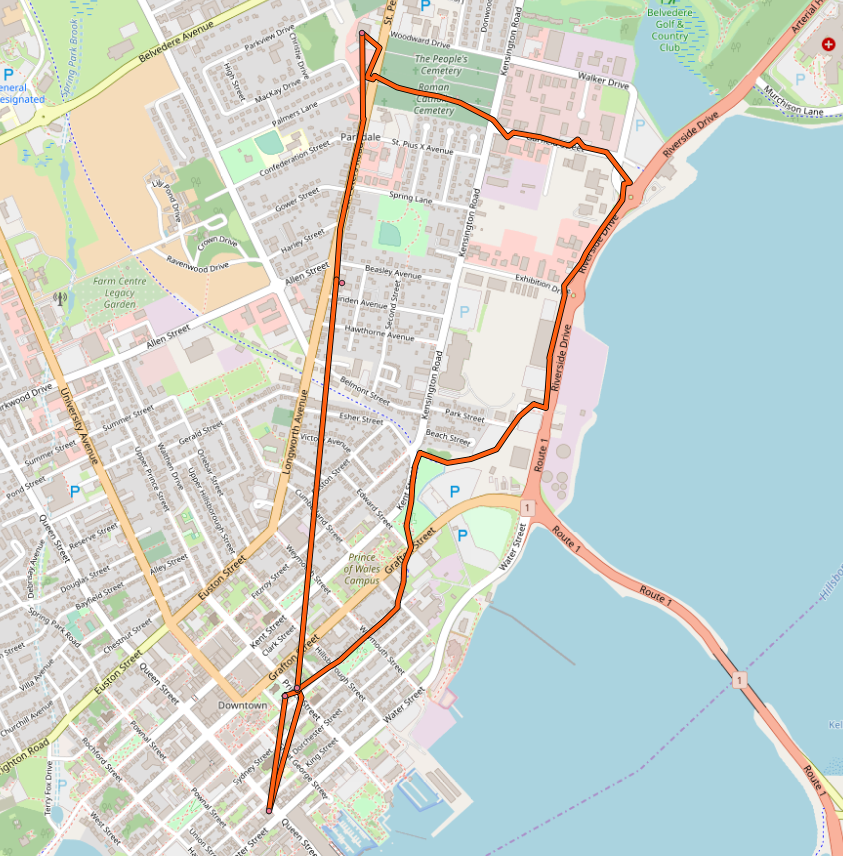 At Home Hardware I did, indeed, find the reported bicycle rack, handy-by the front entrance: 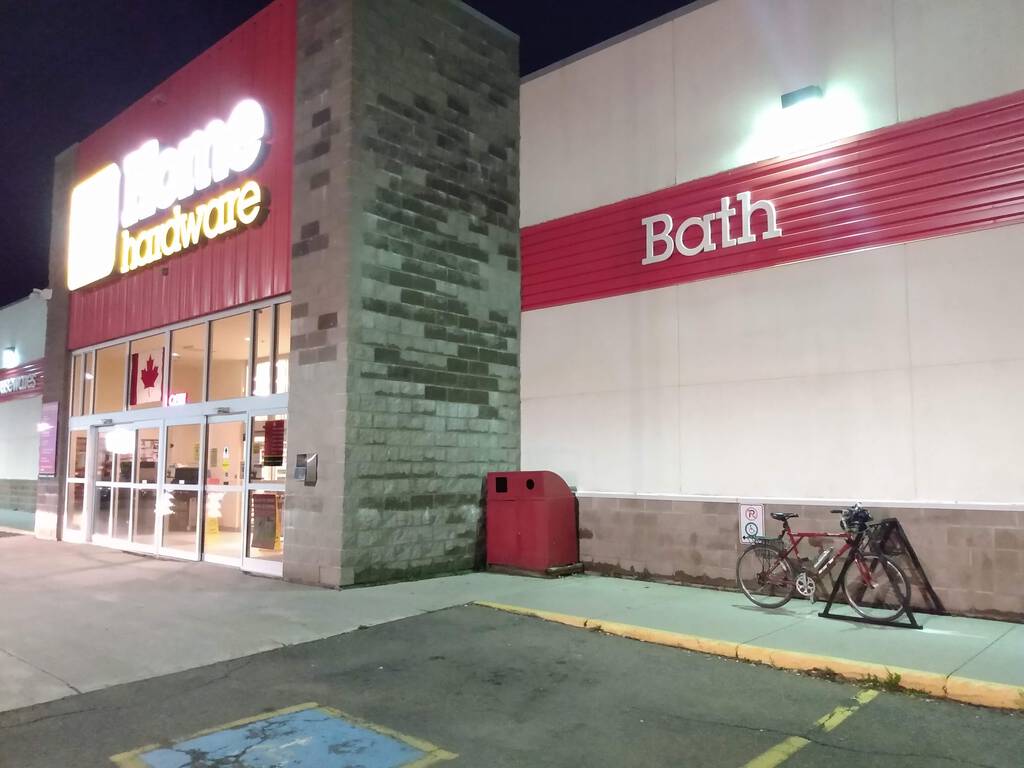 Once I arrived at Home Hardware, I was reminded that, beyond convenient bicycle parking, there are some other good reasons to shop there, including its plentiful, helpful staff (I was asked if I needed help by three separate people; this has never happened to me at Canadian Tire, ever). I found the CO detector and the light bulbs (both on sale!), and was in and out in 5 minutes.

To get from Home Hardware to Murphy’s Parkdale Pharmacy I took advantage of the wide bicycle lane along St. Peters Road that’s almost entirely downhill.

It’s not the best bicycle lane in the world, as there are some storm drains that have sunk into pavement that you need to watch out for, and it’s important to have both a “see” and a “be seen” light on your bike if cycling at night, as there’s a lot of traffic entering and leaving St. Peters Road, but otherwise it’s a pleasant almost-100%-coast.

Parkdale Pharmacy has had good bicycle parking for years and years, right by the front door: 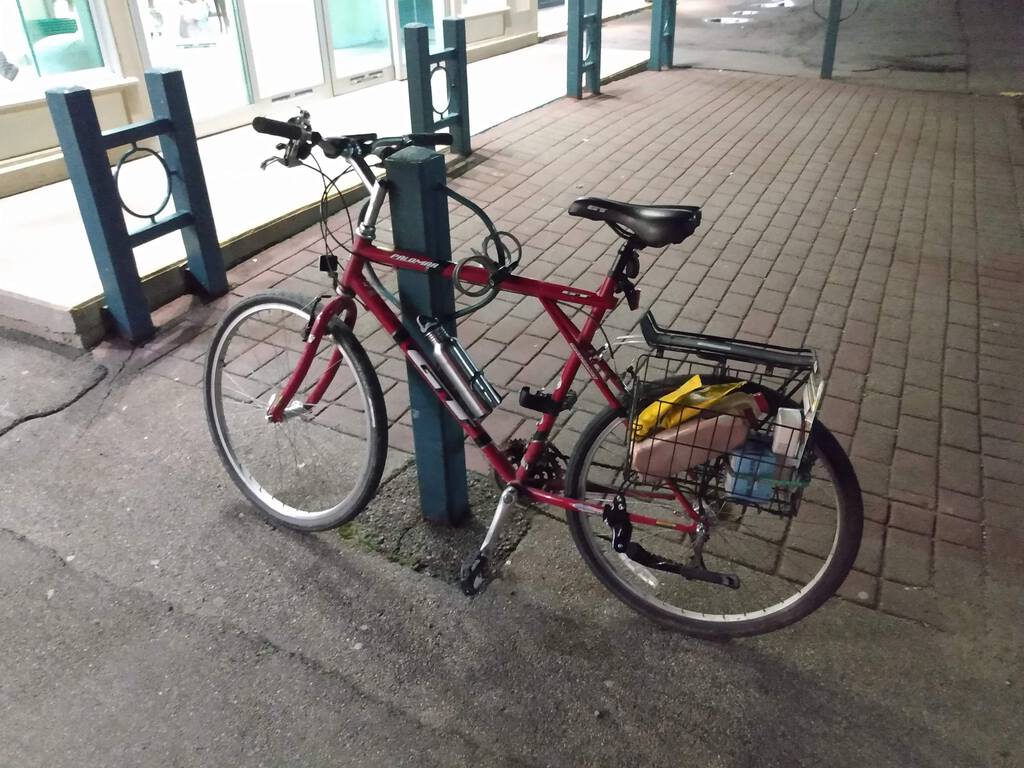 If you look carefully at my folding basket on the right you can see the I added some milk to the bill, white and chocolate, as I realized we were out.

Kudos to both Home Hardware and Murphy Pharmacies for realizing that good cycling infrastructure is good business.

Had I opted for the typical plan for running these errands, I would have driven my car out to Canadian Tire and back, a total journey of 9 km, which, according to the EPA, would have seen me emitting about 2.2 kg of CO2.

Home hardware staff are fantastic! Peter, the more hills you do, the easier they become. However, kudos to this story, we can bike a lot of trips that we automatically jump in the car for.

I DID note the milk and anticipated a comment about a frothy milkshake upon your return home, which did not appear.

Great post! I'm really happy Home Hardware now has bike racks! My only comment is that Canadian Tire is right off the Confederation Trail, so if you cycle there, you don't have to worry about car traffic for the bulk of the ride :)