It all started with a letter in the Eastern Graphic.

I subscribe to the Graphic again, after a year break: I love the new extended tab format, and I am happy that my friend Allan Rankin is back in its pages.

The letter in question, from Jean Selines, concerned St. Margaret’s Beach and damages done to its dunes by a recently-arrived cottager. Jean’s letter began

My 93-year-old Dad has been coming here since he could ride his bike to it in the 1930s. I and my siblings and cousins have been spending time here since the 1950s. More recently our children and grandchildren have played in the river that runs across the sand, learned to swim in the surf and built sandcastles on the shore. It is the spot to reconnect with relatives and friends on a Sunday afternoon and enjoy a picnic lunch while catching up on the local news.

Jean’s description of the beach was compelling enough that I decided that we needed to go and see it for ourselves. And so we powered up the EV and headed east.

We made good time to Souris, heading out the 48 Road to Cardigan, and then northeast through Bridgetown and Dundas to Dingwells Mills and then east through Fortune Bridge and Rollo Bay.

Our first stop was The Poké Shack, where we’d been almost exactly a month earlier; we picked up two poké bowls to go, and put them on ice in the cooler in the car (because I’ve now become that kind of organized person who carries a cooler in the car for summer road trips).

We charged up the car at the Irving, and then continues east until we could continue east no more (did you know that East Point is closer to France than it is to Fredericton?), stopping to eat our supper at East Point Lighthouse: 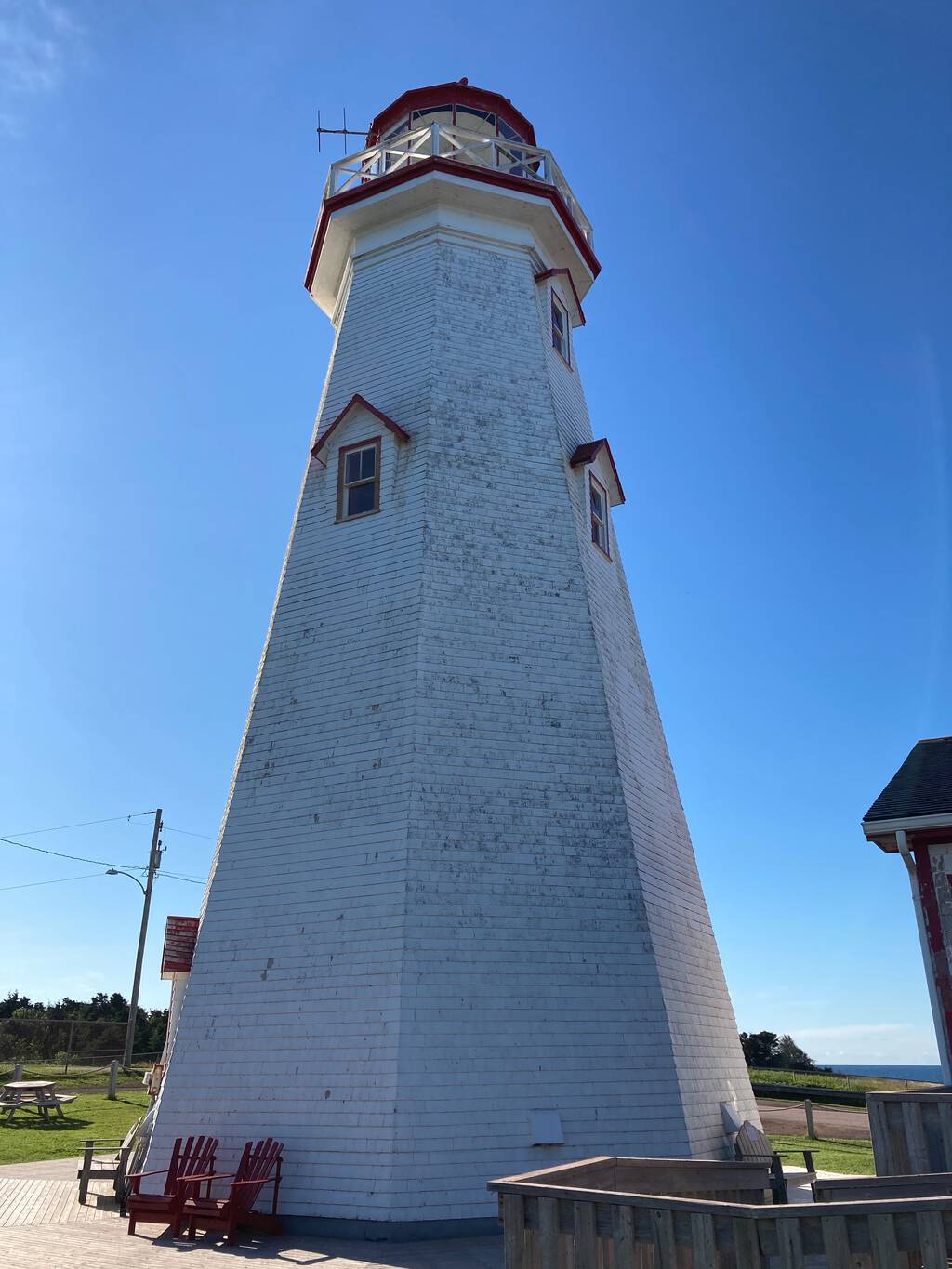 Our first choice for a supper spot was a couple of red Adirondack chairs set up on a platform overlooking the ocean: 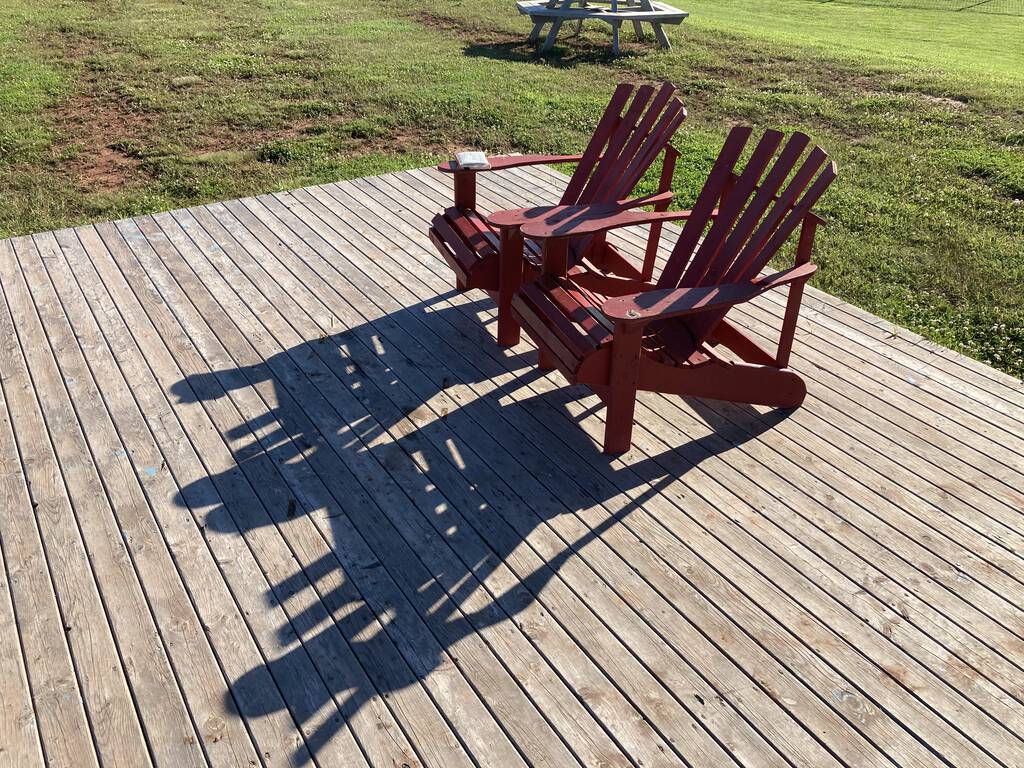 We unpacked our food, only to realize that we had entertained the attention of a curious fox, a fox that crept ever-more-gradually our way: 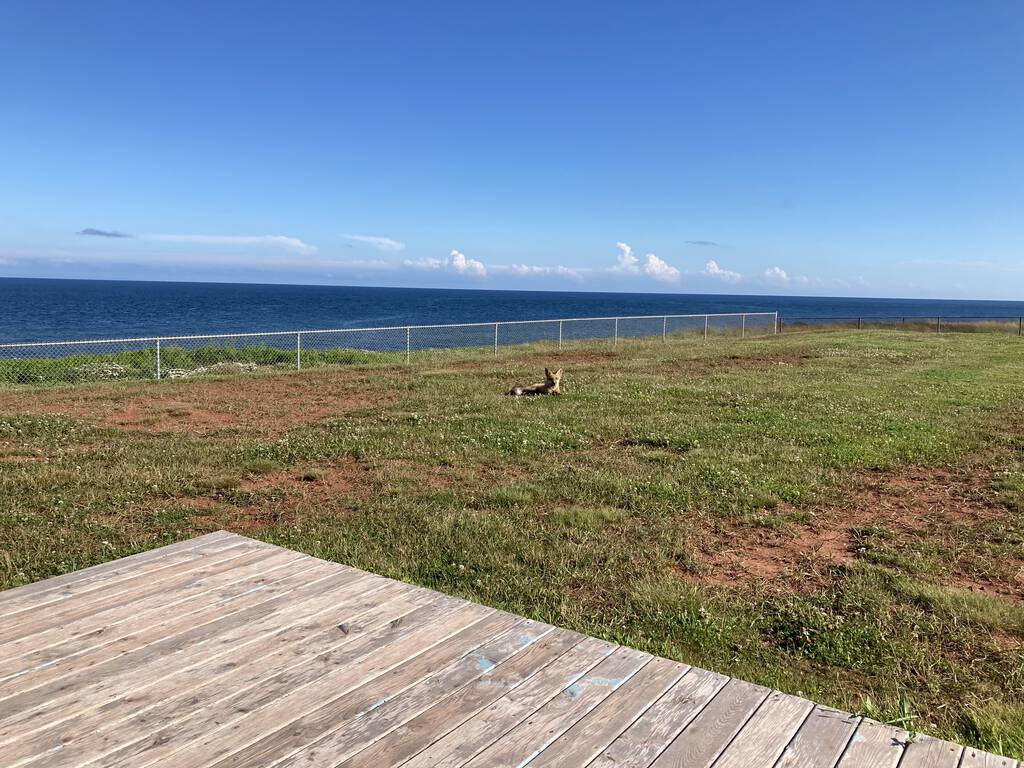 The fox came close enough that we decided it was better to relocate than to try to shoo it away every minute or two, so we decamped to a picnic table nearer the lighthouse. 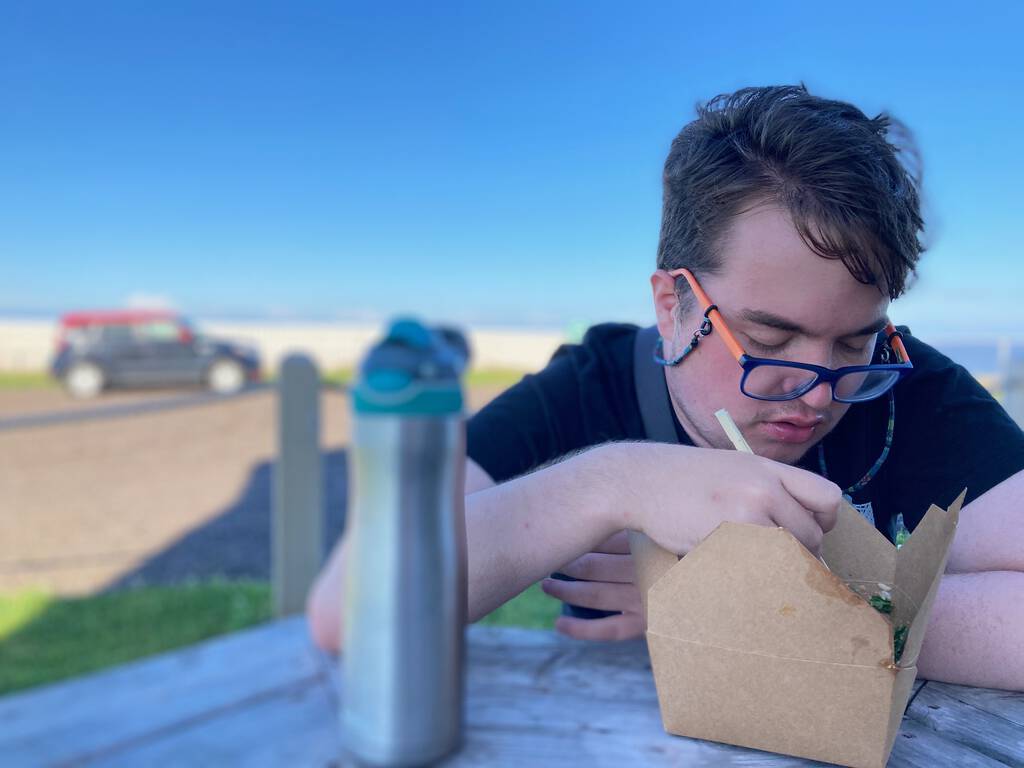 It seemed we’d lost the attention of the fox. Until we hadn’t, and it crept ever-closer (it’s actually a little farther away at this point than the photo makes it appear): 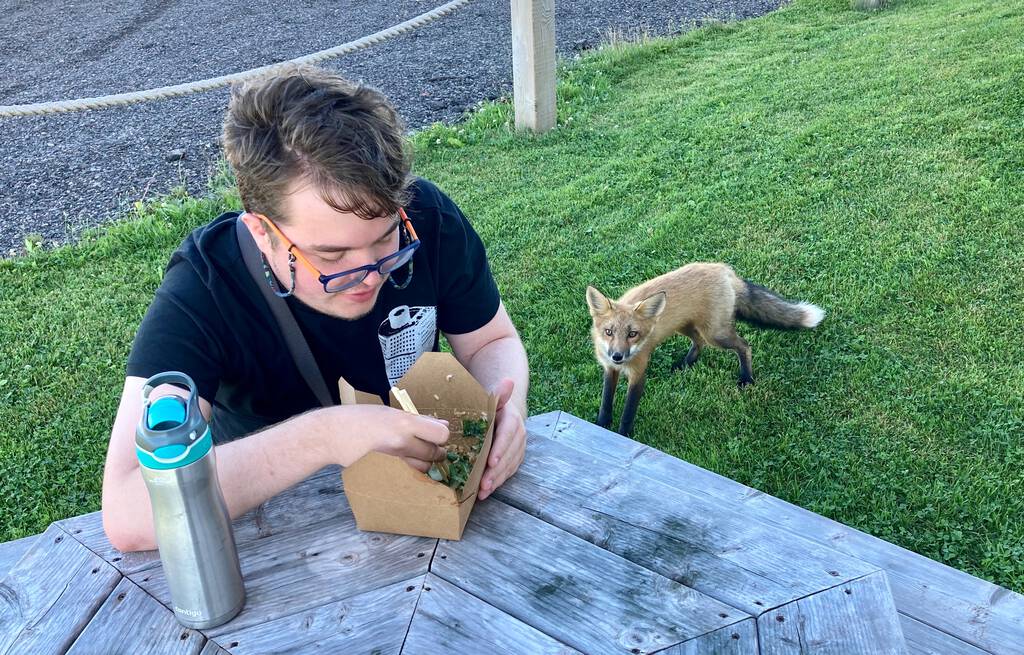 At this point we decided to retire to the car to finish our meal; as we walked away, the fox leapt up on the vacated picnic table to smell around for leftovers.

We finished our stop at East Point with a visit to Cherry On Top Creamery in the lighthouse cottage and then continued along to the north side to find St. Margaret’s Beach.

St. Margaret’s Beach turned out to be everything Jean Selines promised it would be.

We arrived about 7:00 p.m. and found that we had the entire beach to ourselves:

The river that Jean wrote about–Bear River–does, indeed, run through the sand to the ocean, giving us an opportunity to do some freshwater swimming just steps away from the saltwater ocean:

The water was the perfect temperature, and the river a perfect depth for sitting in and contemplating the view.

After about an hour of paddling about and then changing out of our wet swimsuits, the sun was starting to come down, and the 8:30 p.m. Friday Night Family Zoom was imminent, so I snapped a photo of the sunset: 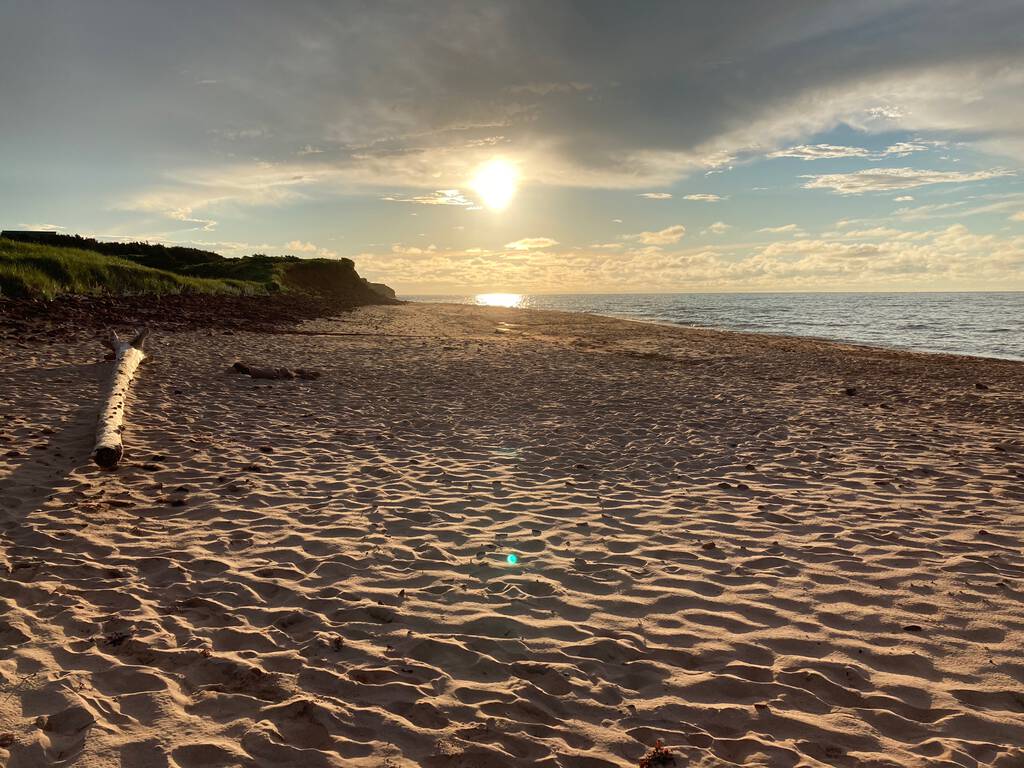 And another of a fisher about to set up at the mouth of the river: 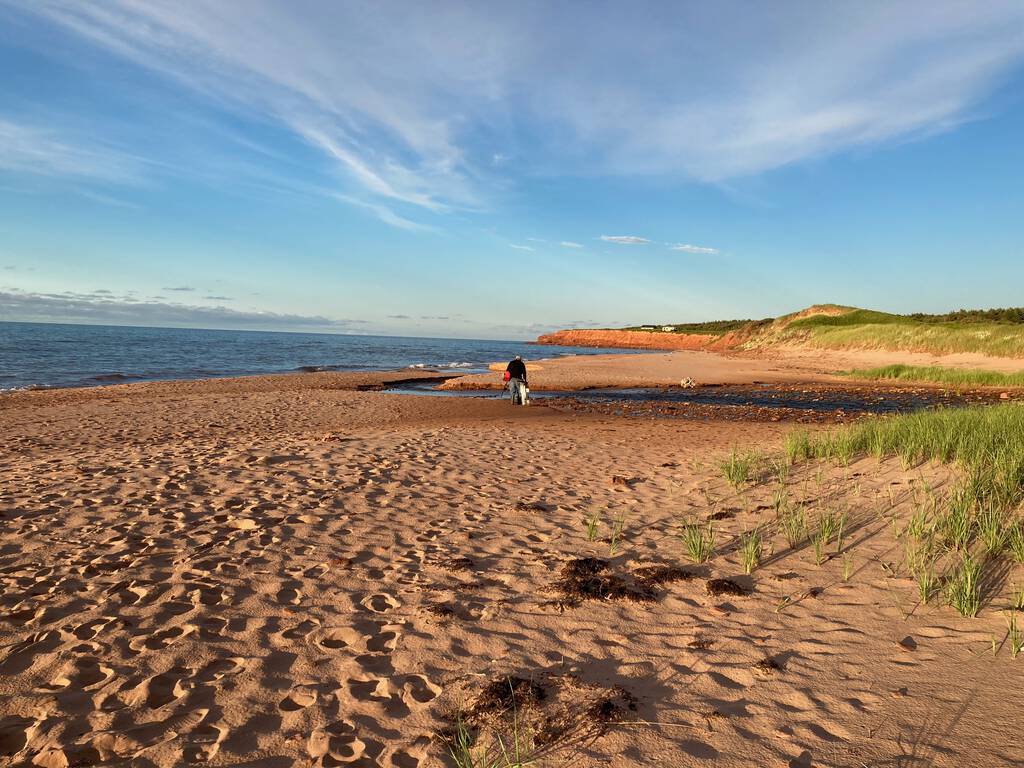 And we were off back to Souris.

The road back to Souris took us right by one of the least-traveled roads on the Island, the lovely-named Mickle Macum Road, and through the community of Bear River, the name of which has, as you might expect, an interesting backstory:

Captain Roderick MacDonald, grand uncle of Marjorie MacDonald, killed a bear at Norris Pond, which is east of Souris. He was walking out of the woods and wearing his greatcoat. Suddenly, he was attacked by a huge bear, and, having an axe in his hand, threw it at the bear. Unfortunately, the axe flew off the handle, and missed the bear. The bear managed to knock him to the ground, and started to maul him, but his heavy coat protected him from the bear’s claws. He quickly shoved his hand and arm down the bear’s throat as far as possible, and pulled with all his might. After a long struggle, the bear let go and rolled over.

Captain Roderick scrambled to his feet and fled as fast as he could expecting that the bear would be at his heels any minute. However, he managed to reach home safely, thankful that he had worn his greatcoat which defended him against the bear.

The next day, he was relating the story to some friends who were sceptical of the event. So, he decided to take them into the woods where the event occurred. There lay the big black bear, just where he had toppled over. The mighty captain had killed the great beast by dislodging some of its vital organs.

Captain Roderick was considered a hero by all who knew him.

There are bears no longer on Prince Edward Island, so the way to Souris was clear.

We set ourselves up for Family Zoom, using a strong LTE connection on my iPhone, from the parking lot at the beach, and enjoyed spending time with family from Ontario, sharing stories in the spirit of Catherine’s father, who turned 89 years old this weekend.

By the time our call was done, the sun had set completely and the almost-full-Moon had come out over the harbour: 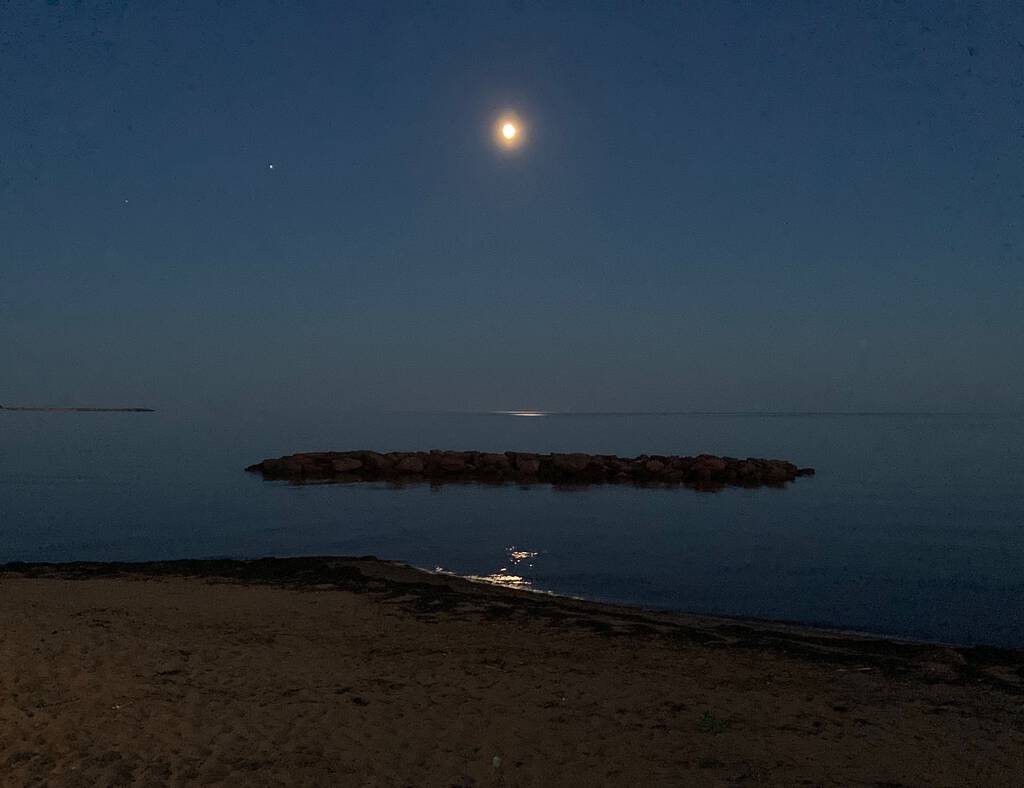 We walked down to the water for a bit, and then, mindful of the late hour and the long drive ahead, piled back into the car, popped up to the Irving to top up the battery, and drove through the cool summer night, Taylor Swift blaring from the hifi, arriving home just before 11:00 p.m.

Thank you to Jean Selines for the inspiration. 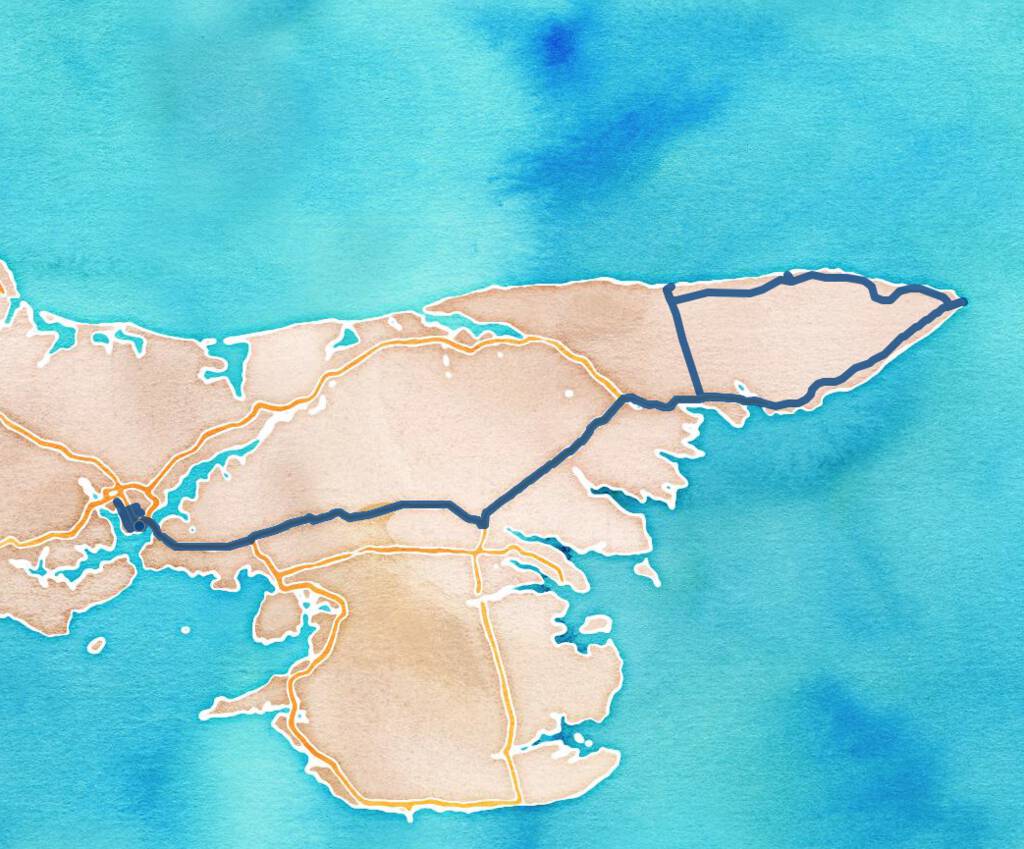 (Our route, over OpenStreetMap, map tiles from Stamen Design)

I'm not generally a beach person (air is too hot, water is too cold, sand is too sandy). I've learned, though, that of you add a small river/stream than runs through the beach, it's way more fun.

That Bear River beach is our favorite (closely followed by Cow River and the beach by Naufrage Harbour, both a few minutes West). We've spent hours on miniature engineering projects redirecting the stream a bit further up or down the beach.

What a beautiful description of what seemed to be a perfect day for the two of you. I’ve always had a soft spot in my heart for PEI’s northeast. Pleasant childhood memories and unbeatable scenery.

Such an enjoyable post to read, and a mere fraction of the enjoyment you clearly had. Thanks for taking us along with you, Peter.