From Flood Maps (about), three visions of the future of our house at 100 Prince Street in Charlottetown as sea levels rise 7m, 9m and 10m. 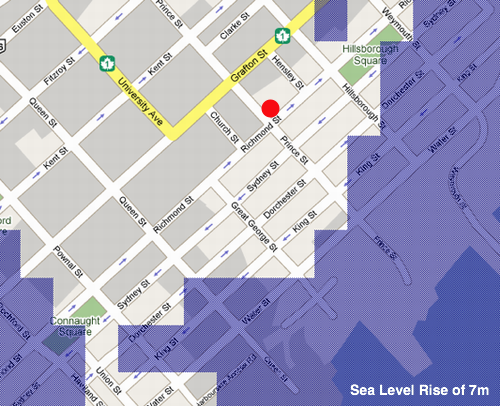 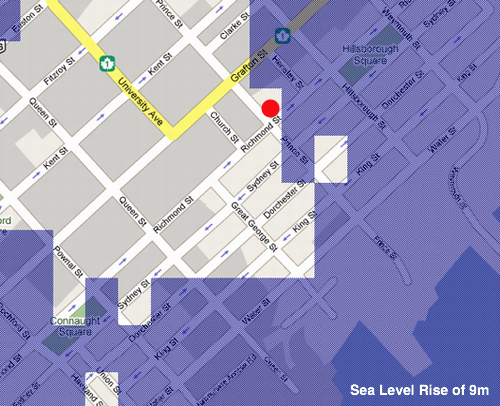 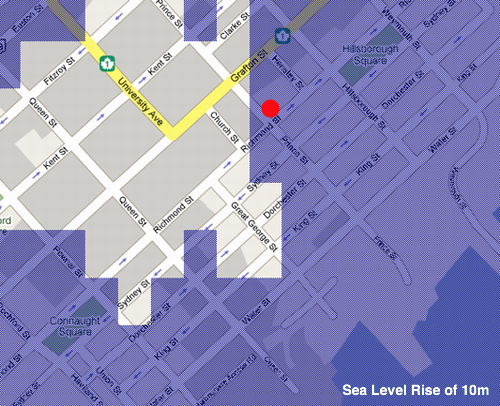 Well, when we hit 5 meters I’m out — so maybe we’ll seek high ground at your place for the next couple of meters.

This can be arranged. We might be able to do a swap for end-times access to your place.

You should chart-out the value of your house versus time or C02 to optimize the sale date with respect to the price/beach-distance relation.

This makes me so sad! My family home is on Water Street; my family has been there since the 1960s, and were flooded for the first time ever about 4 years ago. The flooding is now a yearly event; and the new condo perched precariously on the corner certainly does not help things!

5 *metres*? I can see the sea levels rising 5 feet in my lifetime, but I wouldn’t be too worried about 5 metres.

Sea level has risen at a rate of 32 cm/century in Ch’town since 1900 (recording began). Environment Canada is predicting a conservative rise of 70 cm by 2100 and the IPCC predicts 110 cm.

I would be worried if I was in the condos on the waterfront or at MacKinnon’s Lobster Pound or in Harbourside or the Delta Hotel, etc. but no reason to panic. Insurance companies will just issue higher premiums to those that wish to live in harm’s way.

The thing many people don’t understand is that “Water Street” was the SHORELINE 200+ years ago. Infilling of the waterfront took place during the late 1800s and early 1900s when the railway excavated that big field out behind the CFIA labs in front of the Sisters of St. Martha/Mount St. Mary’s. History shows that 10,000+ railway cars of soil were hauled to the waterfront and dumped there to fill in along the harbour, including all of east Grafton Street… the waterfront used to run inland to the far side of Joe Ghiz Park.

So don’t be at all surprised that now nature is reclaiming what was once part of the Hillsborough estuary.

Granted, human-induced climate change is making an accelerated impact on coastal erosion and sea level rise and more storms, but the majority of the sea level rise in Charlottetown is still entirely natural (land is sinking, oceans are rising and shores are eroding). What is DIFFERENT is that we have built millions of dollars in assessed property all along the waterfront all while knowing that this would eventually happen.