A year ago this week we were heading to Ontario for Christmas with my family and Catherine’s. While spending time in the warm creche of those we know so well was aces, the trip itself–the getting there and getting back–stretched our little troupe to near our breaking point.

It all started when we arrived at Charlottetown Airport on Christmas Eve.

Oliver is challenged by the fundamental nature of airport security: the palpable tension in the air, the prospect of separation from us, the being-ordered-around. So we’d developed a routine of requesting a physical search that, previously, had worked well.

Things were looking up when we lucked into a CATSA agent for the search that we’d worked with before, but things quickly went off the rails when he introduced the possibility of a search in a “private room” into the mix. This not only introduced an element of choice, but also changed a routine we’d already mastered.

It all became too much for Oliver, and, in the meltdowny flail that resulted, I got accidentally knocked into a pile of metal desk parts. We emerged, battered and chastened, a few minutes later once the agents got done what they needed to get done.

Oliver has no issue with flying itself, but it takes him a while to calm down from stressful wringing experiences, and so he was still quite anxious when we boarded the airplane and got seated. Searching for a quick way to redirect his attention and bring some calm to the scene, I pulled out the En Route magazine from the seat-back and found the crossword puzzle.

It was at this point that I discovered that Oliver and I share a facility and affection for crossword puzzles.

I had no idea.

Working on the crossword puzzle had its intended effect: by the time we landed in Toronto a few hours later we were on an even keel.

Over the next week, as various and sundry travel stresses presented, and we found ourselves En Route-less, I turned to making up crossword puzzles on the spot to inject a needed dose of calm.

These are not New York Times-style crosswords; they’re an easier-to-make-up-on-the-moment-without-exploding-my-brain format, and because they’re created in the moment, they draw from local conditions.

Like this one, constructed about Island Fringe shows that we’d seen that very day: 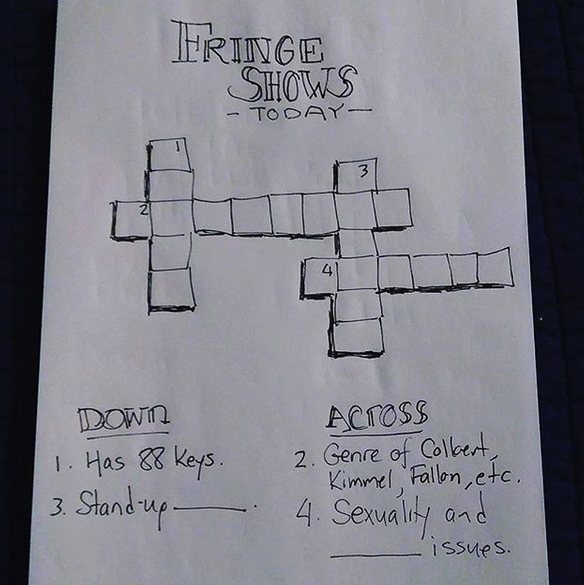 Once we got home, I continued the tradition of crossword-puzzle-making, building it into Oliver’s bedtime routine (go upstairs, have a shower, brush teeth, get pajamas on, do crossword, go to bed).

And so, as the end of the year edges closer, I’m coming up on 365 crossword puzzles authored.

When I leave home for travel, I make up a stack of crossword puzzles for Catherine to build into her nighttime routine with Oliver.

While the original crossword puzzle was injected as a sort of fire extinguisher, today the nightly crossword exists as what I like to think of as an airlock.

Changes of state–transitions–are one of the challenging hallmarks of living with autism, and, just like one seeks to ease the transition from space station to space walk with an airlock, anything that can smooth the myriad transitions of life is a welcome tool. For us, at bedtime, crossword puzzles are that thing: rather than just opening the door to the outer space of sleep, we step inside the airlock of the crossword, and by the time we’re done, 5 minutes later, pressure has equalized, space suit is on, and outer space can be comfortably confronted.

Along the way they’ve become an airlock for me too, of course, and a welcome part of my nighttime routine. 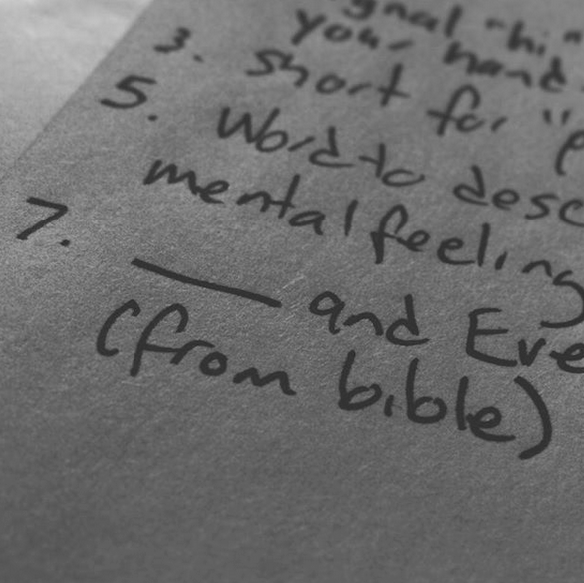 Thanks for sharing this. It reminded me that I also went through a phase of doing and subsequently creating crossword puzzles as a teenager.

What a wonderful story, Oliver is lucky to have understanding and creative parents. This is a good Christmas story. However the security circus at airports like Toronto is incentive not to travel through that airport. I much prefer Montreal.