Regular readers may recall my report of a visit to Dave’s Service Centre to fix a power steering leak in my 2000 VW Jetta last December. Well, last Saturday the same car sprung a leak in a different part of the steering system; fortunately it did this only 4 blocks from Dave’s, so I was able to hobble the car into the parking lot there. When they re-opened on Tuesday morning I dropped the key off, and on Tuesday afternoon I got a report on the problem: there was a leak in a steering component that isn’t available separately, meaning that one must purchase the entire steering assembly, a $500+ item.

Fortunately Dave was able to find a used assembly for $180 “on the other side” (in New Brunswick, not hell), and he got this shipped over, removed the parts I needed and used them to replace the leaking ones. Leaving me with a working power steering system and a saleable steering assembly minus tubes (watch for it online soon!).

What Dave couldn’t work his magic on, alas, was the front exhaust pipe, which I’ve known for a while also needs replacing. Unfortunately there’s a “flange” at the top of the pipe, also not sold separately, which needs replacing. Which means I need a new front exhaust assembly. Also $500+. And one of these wasn’t available on the other side. So I’m left to see if one can be found out there on the wild Internet.

Seeking some additional measure of control over my transportation system on a cheaper and more malleable level, I used this opportunity to drop my bicycle off at MacQueen’s Bicycle Shop for some much-needed attention; 18 hours later I picked it up and rode off on a freshly tuned-up bicycle complete with brand new tires (smoother “road” tires to replace the old, nobbly “off-road” tires; thanks to Rob for the suggestion) and new brakes: 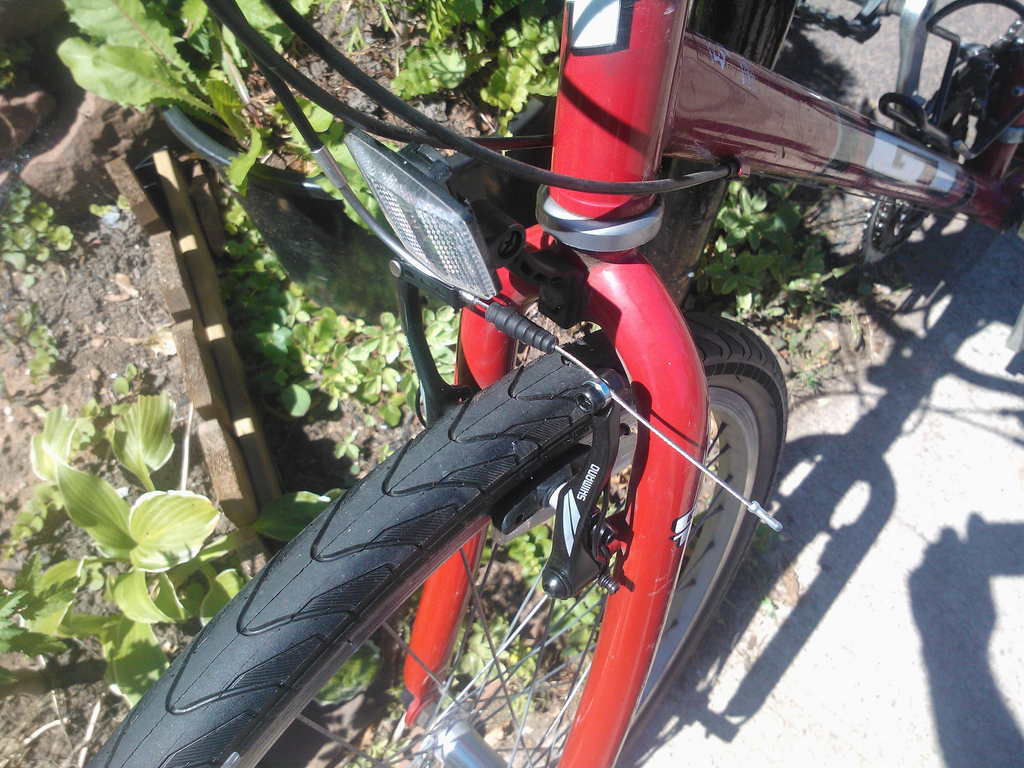 This bike is about 10 years old now, and I’d never had the brakes replaced. They’d gradually worn down over the years, and while I knew that I needed new ones, I didn’t know how much I needed them until I tried out the newly-installed ones: wow, I can stop now! The old brakes were so bad as to be almost completely ineffective: the front ones squealed something awful and the rear ones were ground down to bare metal.

So now I have a smooth-riding bicycle. That I can stop whenever I like. With either hand. Combine that with the general lube and filter work by the folks at MacQueen’s and it’s like I’ve got a new bike.

Now, if I could only woo Oliver back to trying out bicycle riding, we would replace our weekly drive to the Farmer’s Market with a bicycle ride, and really and truly leave the car in the driveway 99% of the time.

In the meantime, if you happen to have a spare front exhaust pipe for a 2000 VW Jetta GLS 2.0 litre, please let me know.