Starting on January 1, 1914 and for every issue of the paper going forward, The Charlottetown Guardian ran some variation of “Confederation Celebration, Charlottetown” as part of its flag on page 1:

Until, that is, Tuesday, August 4, 1914 when it was changed to “Confederation Celebration, Postponed”:

As a page 1 story explained:

The chairman opening the proceedings by referring to the crisis in Europe and asked an expression of opinion as to the advisability of proceeding with the celebration.

Hon. J. A. Mathieson, Premier, thought there was no alterative to postponement. In the present condition of affairs there was nothing else for it.

“The in view of the fact that the Empire is at present engaged in a world-wide struggle and all lesser issues are sunk in our hopes and fears for the welfare of our country, it would, in the opinion of the Committee, be unfitting to hold the celebration at this time and it is therefore decided that it be postponed indefinitely, and that the Committee adjourn subject to the call of the chair.”

The following day, Wednesday, August 5, 2014, The Guardian reported that Britain had declared war: 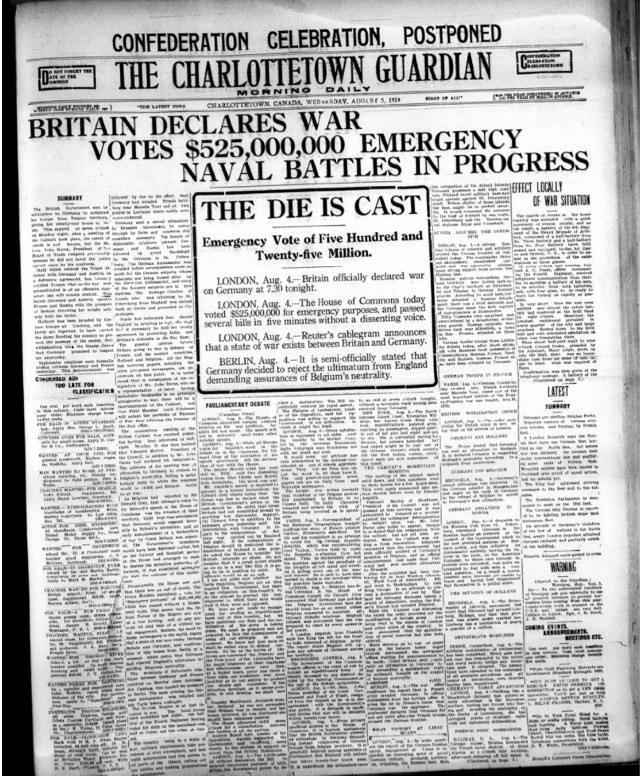