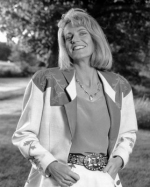 I met Colleen Peterson in the early 1990s when she played a Christmas concert at Artspace in Peterborough, Ontario. I was working as programme director at the local community radio station, and we broadcast the concert live. It was a wonderful evening, and Colleen was a wonderful performer.


One of the songs she played that night was called 1942. I liked the song so much that I wrote to Colleen’s mother, who lived just north of Peterborough in the small village of Lakefield, inquiring whether it had been recorded. She wrote me back a very nice note explaining that it hadn’t, but that if it ever was, she would be sure to let me know.


Colleen died of cancer on a Wednesday in 1996.


There’s a lovely Book of Remembrance on the Quartette website that’s worthy of a good read through.

Do you know if that song ever got recorded?. She truly was a national treasure.

My God, Kevin and I agree on music. How did this happen?

I was fortunate enough to have spent part of my youth in Ottawa while I believe it was still Ms. Peterson’s hometown. It truly was an honour to have shared the capital city with her.
I used to look forward to seeing Ms Peterson perform on the old A Go-Go 66 show.
She definitely inspired me.
I now have a number of volumes of spiritual poetry in the library. They’re also in the national library.
It’s an honour to share the Canadian arts landscape with such a gifted woman.

Colleen was terrific. A wonderful person and a stellar singer. Thank you for mentioning the song 1942. Colleen sang the original demo for us back in 1985, and later recorded it for her own album. The song was written by Byron Hill and Tony Hiller. Anyone who wants a copy of Colleen’s version can contact me and I will be happy to send. -B.Hill

Wow...nice taste, folks..."1942" is a tasty song amongst the many fine ones on Colleen's albums.
Mr. Hill; congratulations on your part in the writing of this classy and deeply evocative song.

I wore out my lp "Basic Facts", and this was my favourite cut.
Is it still possible, these few short years later, to take you up on your kind offer? I'm a song writer myself, and really admire your song craft.
And Colleen was my absolute favourite singer, all-time.

All the best,
and especially to Colleen's family,
Terry