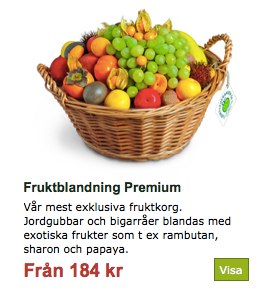 One of the benefits of having curious nerd friends is that they’re willing to entertain my predilection for wide-ranging conversations about the minutiae of everyday life.

In today’s episode the topic at hand was office fruit delivery and my coconspirators were Olle, Luisa and Jonas.

We arrived at this destination as we were splayed out for Sunday brunch here in Malmö, and it took us through a lateral thinking slalom course that started in Portland, Oregon, took us through Salt Lake City and then to the Google Campus, to the common practice of Danish employers providing lunch to employees and finally back to Malmö where the matter at hand ended up being the job perks of the Swedish workplace.

Olle, it turns out, has a popcorn machine in his office.

“So,” I asked, “is this a usual thing, to have a popcorn machine in a Swedish office?”

(No, it isn’t; it was a vestigal perk from an earlier company occupying the same space).

But, it turns out, office fruit delivery is a thing – a normal thing – here in Sweden.

There are companies in the business, like Fruktleveransen (with strapline “Frukt på jobbet” – “Fruit on the job”) that exist to service the office fruit delivery marketplace.

And as a result the Swedish worker has a reasonable expectation of ready access to fresh fruit. On the job.

Which led us to the question: do fruit privileges extend to visitors to the office?

There was no consensus on this issue: I would certainly be offered a coffee upon arrival in an office, it was agreed, but the propriety of turning down the coffee and asking instead for an apple or banana or kiwi remains unresolved.

I may have to seek real-world evidence by showing up at Olle’s office and running some tests.

Along the road to this surprising fact, I also learned that Danish school children call their teachers by their first names.

And that there’s been something called “you reform” in the Swedish language, a move roughly analagous to a wholesale switch from “vous” to “tu” by the entire population.

I could do this, quite happily, every day.

Indeed if Cultural Anthropology didn’t sound like the dullest profession on earth I might consider taking it up.

Ahem. Here in Portland, my work has a fruit delivery too! Plus carrots still with their local dirt on them. It only seems to be every couple weeks or so though, and donuts do show up sometimes in between.

I believe my sister-in-law’s work office in Portland also has fruit and a (pardon me) smorgasbord of other things always in stock in their lunchroom. I keep hoping to see it, I guess assuming as a guest I’d be allowed to have some, but now you’ve forced me to realize I don’t know that would be considered right here either.

Well, I did say that Portland figured into the story (as, indeed, did you).

And, besides, isn’t Portland really a European city anyway?