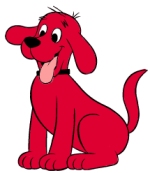 Scholastic, says the company’s website “is a $2 billion multimedia company with 10,000 employees operating globally in education, entertainment and publishing businesses marketing to children, parents and teachers.”


When I was in elementary school there was some sort of program whereby we students could acquire various Scholastic books through the school (the website calls this the “companys unique school and community-based distribution channels”). I guess I’d always assumed that Scholastic was some sort of benevolent society, like The Gideons; I never imagined it had more in common with Random House than the United Way.


I know all this now because wee Oliver and I have become fans of Clifford the Big Red Dog, which airs every day on PBS. That I can abide watching this show every day amazes me. Not because of the show itself, which is actually quite interesting. But because Clifford is voiced by John Ritter for whom I have latent ill feelings after watching endless episodes of Three’s Company. To say nothing of his day-glo condom antics in the 1989 movie Skin Deep. Oliver, of course, has no such hang-ups.


Which brings me to the issues of SRA Tests. Does anybody else remember these? These tests first appeared in grade 7 or 8, I think, and were a series of brightly-coloured cards that came in a special box. In my faded memory each card contained some sort of MENSA-like brain test. SRA stood for Science Research Associates and, again, I always assumed this was some sort of educational organization attached to the CIA or the Pentagon. It turns out that SRA is “is a division of McGraw-Hill Education, the largest pre-K through 12 educational publisher in the nation, and a unit of The McGraw-Hill Companies.”


I was only partially wrong: SRA used to be owned by IBM and their instructional model, the “Distar System” was “the only instructional model that the federal government tested in a $500-million, nine-year project that produced significant overall gains in basic skills, cognitive areas and self-concept.” I think the SRA products I remember are still around as Performance Based Assessment Tasks.


The next thing you know I’m going to discover that Nestle, who sponsored the large wall maps in the classrooms of my youth, is a profit-making corporation.

I remember the giddy thrill of the day the new books arrived at the school (I assume from these Scholastic people), but also the crushing disappointment if I had not ordered any books and all of the other kids had. I also marvel at the ridiculous amounts of money I probably wasted on glossy paperback versions of recycled Snoopy and Marmaduke cartoons, which, had I dumped it into a high-return mutual fund, would have doubtless made me a millionaire today. John Ritter, by the way, wasn’t bad in Sling Blade.

Clifford has slumped to #2 on the hit parade with our 3 year old Abby — Bob the Builder has ascended whence Tubbies (good), Cailliou (foul) and Clifford (good+) walked as gods before. Not only are these all fronts for mega-corps but the messages of some shows can be so freakish. You forget that the writers need not pass a Children’s Aid Society test to determine the fitness of their ideas. Clifford and the Tubbs can get overly sweet but at least they teach things like my grannie said: “handsome is is handsome does”, “be nice to strangers” etc. I am shocked by the glaring lack of attention to building codes on Clifford’s Birdwell Island but…I notice such things. Caillou, however, is just a weird, hairless ball-headed boy who destroys his folks home and see wickedness in everything strange — a real 1600’s type of low country protestant frady-cat type — and who liked them anyway. No doubt like that weird “Mimo and Me” the product of sullen Flems or Finns. Now Bob. We love Bob. Bob is a robust building contractor but without a hint of sexist “man can build” in him, entrepreneurial and communial, lives in the country and help hedgehogs. He apparently can speak with his oversized Tonka toys. Unfortunately, we only get the US version on CBS or video so we hear Yank voices saying “brilliant!” when it should be “right on!” No doubt behind him there is another mega-corp but for the next few months I will back the industrial machine hat grinds out the stuff. Like the insurance policies that floated around schools and gave every nine year old boy a moment’s pause to consider whether the hand might just be worth $3,000.00, I wonder how Scolastic got into the school system sucking funds out of parents which if put into the library funds would have provide a far greater resource for young readers.

Scholastic does have an odd relationship with the schools. I can remember in elemetary school that it was understood that you were to get money from your parents and buy something at the book fair (when good books couldn’t be found, you could always resort to bookmarks for fancy erasers). Odd indeed.

I thought I was the only person (or me and my class anyway) who was subjected to those awful SRA things. I remember there was a box and we had to go to the box and get which ever one we were working on. They were colour coded — I always seemed to be stuck on olive .We had to read the incredibly tedious little article and then answer the incredibly tedious little questions. It was suppoed to improve reading comprehension…but, in retrospect, I think it just gave our teacher a break…busy work, I believe they call it. I had not given it a thought from grade 5 until this moment. I hated them…but I loved the Scholastic books. Once I spent $15 on those books and got a box so big I couldn’t carry it home. Included in that dizzying order was a copy of the Warren Commission report…my eyes being bigger than my brain. Maybe if it had been coloured coded with a little question at the end of each chapter…

Ahh, someone else who bought the Warren Commission Report …! Next thing you know, she’ll be claiming to remember Lik-M-Aid …

My personal fave was a Scholastic book I bought in Grade three, called Golden Dog … the heroic antics of a dingo in Australia. It still colours my thinking .. a dingo did NOT … COULD not … WOULD not eat her baby!

I still have that book. My kids read it. They were singularly unimpressed, preferring the Babysitters Club series. Girls … phhhht.

The arrival of the new shipment of Scholastic Books every six weeks or so was a wonderful event. I remember sitting, quivering in my seat like a tuning fork, until four c’clock (in Manitoba schools, you stayed put till four o’clock, and now “snow days” just because Wayne Collins declared a 40% chance of a skiff of snow, either! Oh, my God, I’ve turned into my father …) (what was my point?) (Oh, yes:) until four o’clock, when we’d be allowed to go to the back of the classroom and pick up our individual book orders. And that night, breezing through book after precious book, transported …