My neighbours Doug, Andrea, and Meghan, Lisa, my brother Mike and his partner Karen, and my friend Lauranne, have been very helpful in clearing the felled trees from the back yard here at 100 Prince Street.

This was the scene when I opened the back door on Saturday afternoon, an impenetrable wall of trees: 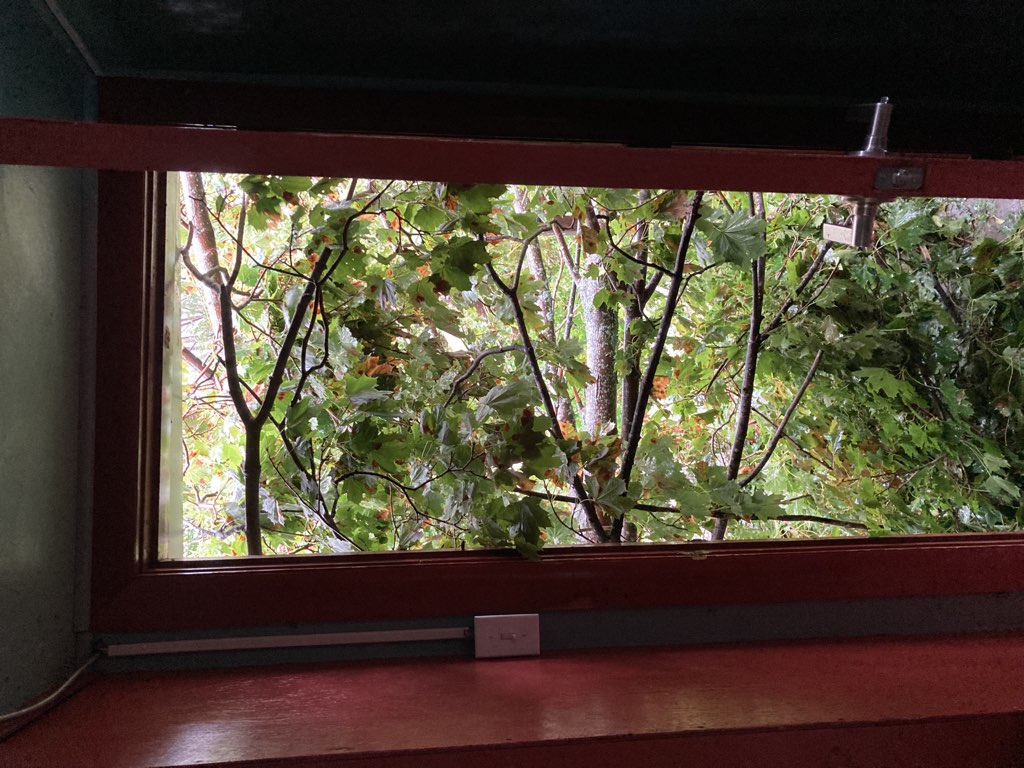 Less than 24 hours later, on Sunday afternoon, thanks to Doug’s help, and the very powerful handsaw that I inherited from my father, the debris was almost completely removed from the back deck (and my biceps considerably weakened): 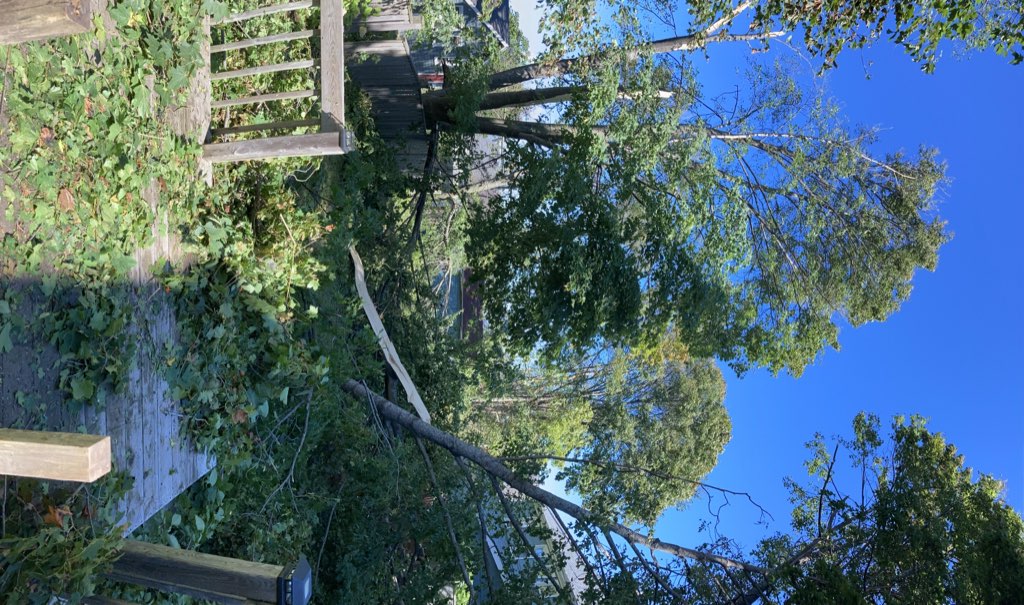 By Monday we’d hauled all the debris from the deck and from the front part of the yard out to the curb, and the prospect of clearing out everything began to seem less infinite: 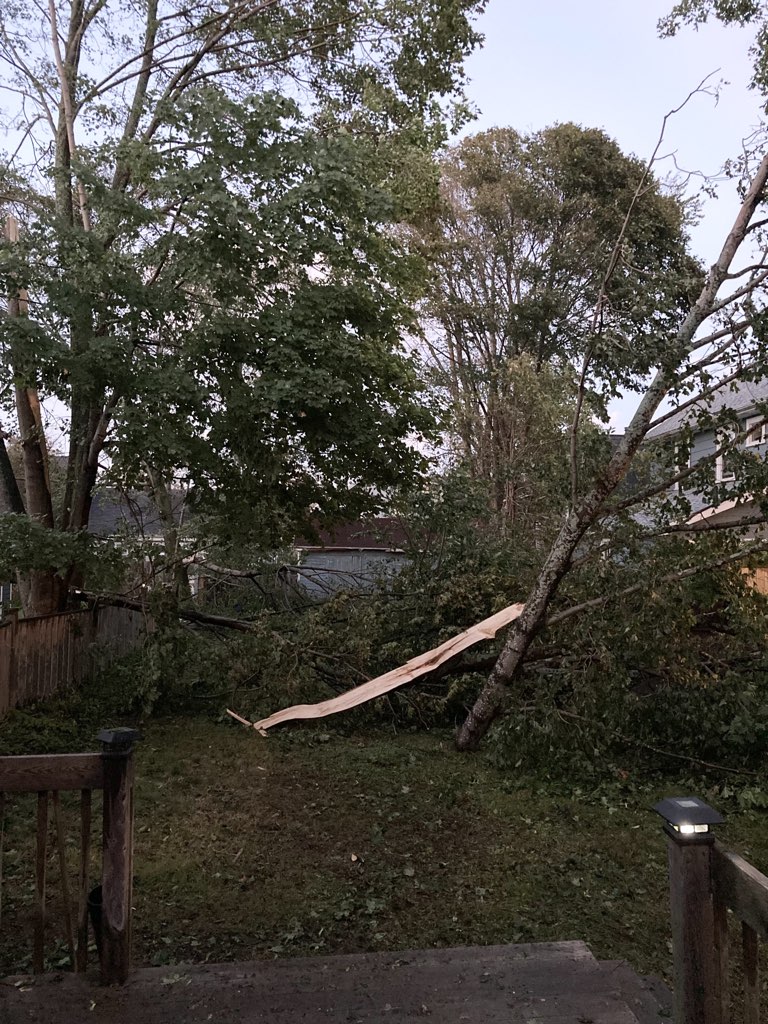 On Tuesday, Doug used his electric chainsaw to start attacking the larger issues: he trimmed the tree on the left, about halfway back, and we hauled much of it to the curb: 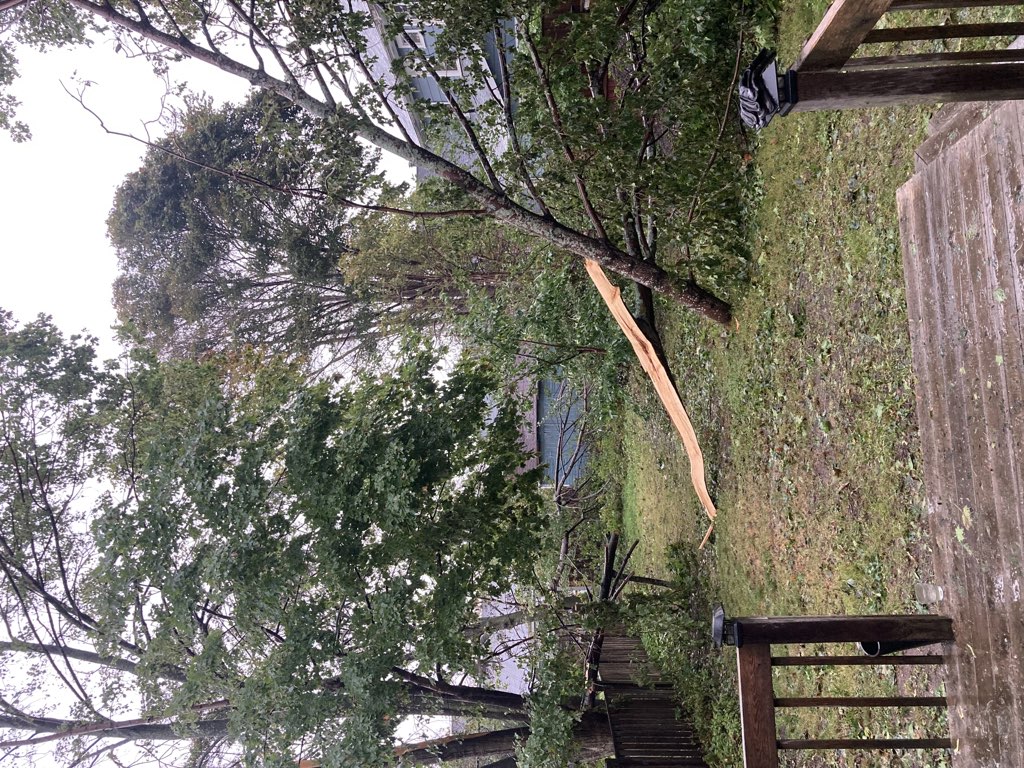 By yesterday evening—Wednesday—the entire middle tree, and the large tree at the back of the yard were cleared, and a lot of the debris under the apple trees on the right was cleared out too (all three apple trees survived; the plum tree got toppled. but is unbroken and might be saved): 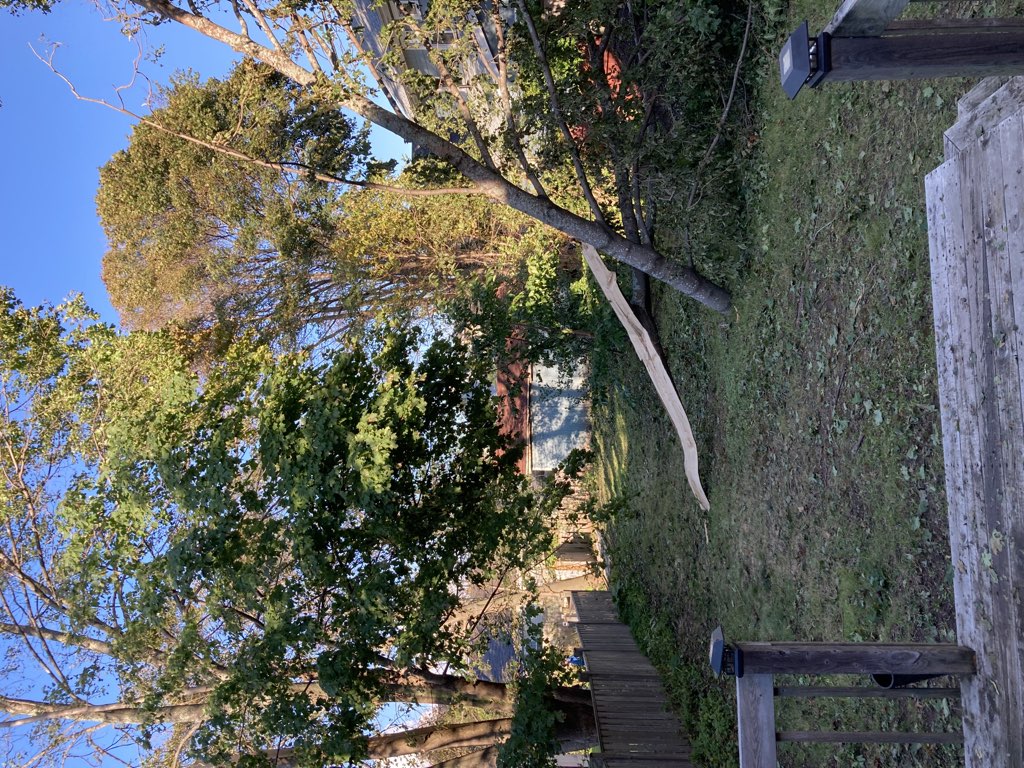 The tree that remains in the photo above is the scariest one of all, both in where it came from and in removing it: it flew about 3 metres from the fence line, from high atop the tree you can still see standing on the left.

As you can see in the photo below, it has wedged itself into an embrace with a much larger tree, still standing and apparently solid, across the fence on the right. The damage that tree could have done to our house, our neighbours’ houses, or even just the fences, would have been considerable had things gone differently. We’re going to leave that tree to the professionals, as cutting it down ourselves isn’t safe. 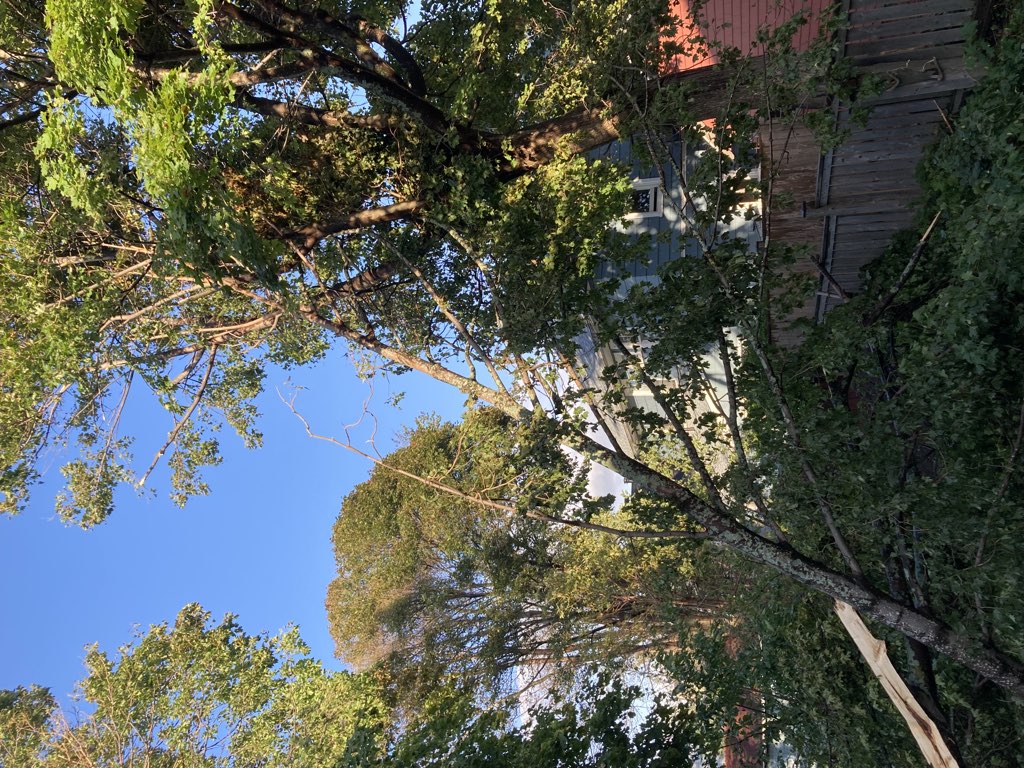 Tuesday afternoon a crew from Island Coastal came along the street with a steam shovel (yes, I am a child of the 1960s) with a big claw on the front, and a frontend loader, and deftly ate up everything we had placed on the curb. I expect they’ll be making another round later in the week.

Last night, walking home from across the street at the office, I took this shot of our blessed house: 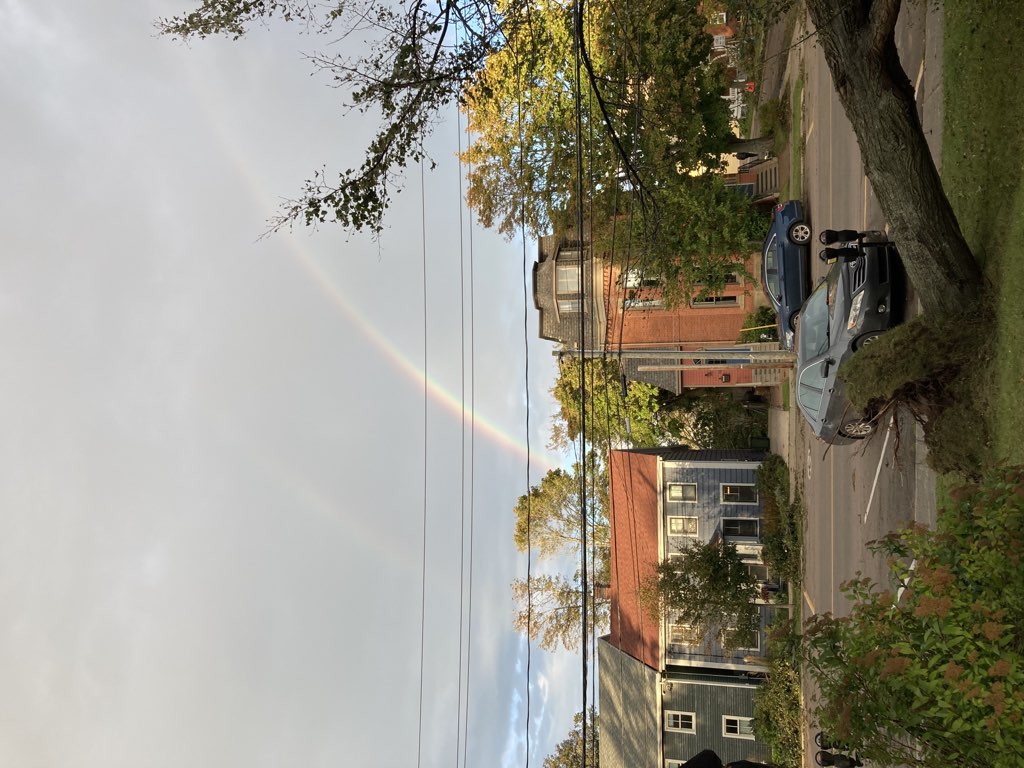 Meanwhile, across the street at the aforementioned office, things are in disarray: when the power came back on, the circulating pumps for the district heating system appear to have caused a pressure surge, which broke an old cast iron pipe to the radiator in my office, which caused a small flood. Nothing was damaged but the floor, but the office nor the print shop are usable until the rad is repaired and the floor cleaned and repainted. Fiona’s tentacles are deep.

Glad you are all well. Much love to you and the house!

This is quite a photo essay, multiplied all over the island. Again, glad that your house is OK. Hope your office recovers.

This seems like a good place to pile on (pun intended) with praise for neighbours. We had four trees (two poplar, one spruce, one cherry) down in our back yard with no peripheral damage. Another poplar, the largest at an estimated 70 ft, is woven into a few large pines on the other side of my undamaged shed. Most trees used to be my back door neighbours. The place to the east of us lost their large cherry tree in the jumble with the largest poplar. We were out eating and showering at my parents one afternoon and came home to my back door neighbour, Rob, his two teenage children and a friend with chainsaw and they had the majority of it cut and hauled to the curb before we were even able to contribute. It was a lot of tree. The poplar is still there on the pines and they will take professionals to bring them down safely without crushing my shed. That day I found the best use for some $50 Food Island gift cards we bought way back, giving one each to the teens. We will do something for Rob and his friend also. Thanks to them, our yard is largely back to normal except for the enormous debris pile on the roadside. Good neighbours indeed.