Fifteen years ago last weekend I found myself in the serials section of the Metro Reference Library in downtown Toronto looking to kill some time. So I picked up a copy of The Guardian in the newspaper section and sat down to read it. I’d only been to Prince Edward Island once, for two days, the fall before, on a drive back from Halifax and I knew almost nothing about the place. But Catherine and I were casting about for a new horizon, and so I was primed for possible adventures. Which is when I came across this: 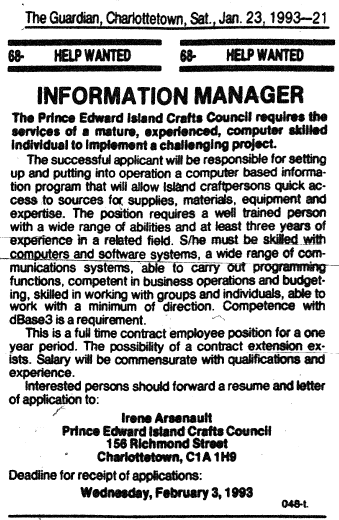 It happened to be February 3 itself when I found the ad, and so I immediately got in my car, drove the 90 minutes back to my home in Peterborough, typed up my resume and faxed it to the PEI Crafts Council before the deadline.

A week later I got a call offering me an interview (although I’d have to pay my own way to Charlottetown). So I borrowed some money from my parents for an airplane ticket, flew to Halifax, hooked up with my friends Richard and Victoria, and we drove over to Charlottetown for the interview. We had lunch at the Old Dublin Pub, dinner at Shaddy’s Shawarma Palace (which had just opened two weeks earlier), and stayed overnight at the CP Prince Edward hotel (with a Richard and Victoria’s giant black lab welcomed at the front desk).

That night I had my interview in the back room at the old Crafts Council shop on Richmond Street. Morley Pinsent was there, along with Pat MacDonald, and Darren Matheson and the rest of the Board, along with Irene Arsenault, who managed the Council. I’d taken a risk when I wrote my cover letter, trying to mask my relative immaturity (I was hardly a “MATURE, experienced computer skilled individual”) with humour (I suggested that hitchhiking across the country, for example, was part of my relevant experience); this h turned out to be a plus, as I think it intrigued the committee as much as anything else. I remember being asked about my relevant “crafts industry experience” and trying to spin a yarn about how my relationship with Catherine had given me an “appreciation for craftwork.”

It must have worked, as the next morning I got a call offering me the job, and, somewhat foolishly, said I could start in two weeks. So I rocketed back to Peterborough and asked Catherine how she felt about moving to the Island. In two weeks. While she was up for the former, the later was a little bit of a stretch — she did have a life of her own to wind down, after all — so while I arrived with a pick-up truck and U-Haul trailer full of our life’s possessions on March 16, Catherine didn’t arrive until a month later.

My friend Simon drove down with me, and we spent the first three nights at the Queens Arms Motel in West Royalty until I found an apartment at 50 Great George Street and Simon headed back to Ontario. I moved into the apartment in the middle of a blizzard, managing somehow to back my truck into the house next door and cut off their phone service.

The next morning I reported for work.

A shout out to Leo Cheverie at the UPEI Library for helping me figure out how to use their fantastic microfilm scanner out there. With the January 1993 reel in hand, it turned out to be trivial to scan the ad, once I found it, into a TIFF file, and then Gmail it to myself.

Thanks for relating this genesis.