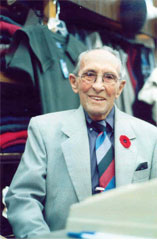 One of the best experiences I’ve ever had buying clothing was the time I walked into Hambly & Innis Men’s Wear Clothing on University Avenue looking for a pair of pyjamas. Clarkie Innis sized me up, went into the back and found me a pair of flannels that I’m still wearing 10 years later. It felt like it was 1922.

I’ve walked by Hambly & Innis on my way to work almost every morning for as long as I can remember; although their stock was tilted about 30 years older than my demographic, rare is the day that I haven’t entertained the thought of finding a reason to by a fedora, or a yellow and blue checked spring jacket.

John Clark Innis died yesterday at the age of 94. His obituary reads:

A well known and respected Charlottetown businessman, John Clark “Clarkie” Innis, died on Wednesday, March 26th, 2008 at the Queen Elizabeth Hospital. He was 94 years of age.

Both Clarkie and his son Kenny operated a very successful Hambly & Innis Men’s Wear Clothing Store in downtown Charlottetown with a history that dates back to its inception in 1949. Up until recently he worked in the day-to-day operation of the family business.

Mr. Innis was the beloved husband of the late Kathleen “Kay” (nee Acorn) Innis, and dear father of Gloria (Ross) Gilmore of Dartmouth, NS and Ken (Pauline) Innis of Charlottetown. He will also be sadly missed but fondly remembered by his grandchildren, Jason (Karen) Gilmore, Jill Gilmore both of Dartmouth, Ryan Innis and Kyle Innis both of Charlottetown; and his numerous nieces and nephews.

The last surviving member of his family, he was predeceased by his parents, Roderick and Laura Jane (Clark) Innis, sisters and brothers, Arabelle Baillie of California, Charles Innis of Ontario, Jean Grenier of BC, Eleanor Innis and Smith “Doc” Innis both of Pictou County, NS.

Thoughts tonight to his friends and family.

I went in there for the first time in my life about a month ago, enticed by the ‘50% off’ sign in the window. I certainly wasn’t planning on it, but I ended up buying a suit — a very nice, stylish gray wool suit. I couldn’t resist the deal. I bought it from Clarkie’s son, Kenny, who told me his father was not well, and the store would be closing shop soon. I never met Clarkie, but he said ‘hello’ on numerous occasions as I passed by on the sidewalk.

We were very big fans of Hambly&Innis in our house. The male part of the household actually bought a lot of things there and I even got myself a cardigan there once. The great part was going into the store, which has probably not changed a bit since 1950. They could take the furnishings right to the Museum of Civilization.
But the very best part was Mr. Innis, who told wonderful stories about his days in the retail trade and was always happy to cut you a deal. He was a delightful man and I’ll miss him, and his store, very, very much.

I am sorry to hear that Clarkie has passed and that H&I will be closing. My mother took me in there to buy my first suit and I left feeling like a million bucks! The back changing room / office gave it an authenticity you just won’t get anywhere else. Something tells me they would have fit right in on Saville Row, but we were lucky to have them.

I also left with 2 ties that actually have zippers, so you never have to tie them. They look like they were tied by an experienced banker. To this day they are the only 2 ties I own, I am still looking for an occasion to wear them though.