When I’m singing the virtues of travel to people who haven’t traveled that much, inevitably the question of language barriers comes up, and my stock line is as follows: in any given situation in a non-English speaking country you find yourself there is a limited set of expected interactions.

You’re not going to walk into a bakery looking to buy a hammer, and desk clerks at hotels expect that people walking up to them will likely be looking for a room. This narrowing of the expected interactions is what makes travel without language possible, and there’s almost nothing you can’t achieve with some creative gesturing.

What I usually leave out of these calming words are the two or three situations where the rules don’t apply, which are generally when something unexpected happens (like walking into a bakery looking for a hammer).

The most common situation we’ve run into this is on trains, when there’s a change schedule. Traveling from Prague to Cheb in the Czech Republic in 1998, for example, an announcement came over the train’s public address system that was obviously important but that we couldn’t understand a single word of. As it turned out, the train couldn’t proceed any further, and a transfer to bus was required. Fortunately our compartment-mates saw the confused looks on our faces and generously guided us through the change in plans.

That’s what usually happens – things work out, somehow – and it’s often these “plans going off the rails” moments of travel that turn out to be the favourite memories of a trip.

At the end of our trip to Europe earlier this month we had a partial derailment that ended up working out perfectly.

Oliver and I, leaving Catherine to explore Munich’s fine art galleries, headed off for a day of museum touring. We started off with the Deutsches Museum and my plan for the afternoon was to visit the Kindermuseums München attached to the central train station. Unfortunately when we arrived at the expected 2:00 p.m. opening time for this museum, it was empty and closed. So we needed a Plan B. While I was rumbling around for said Plan B, I came across this poster: 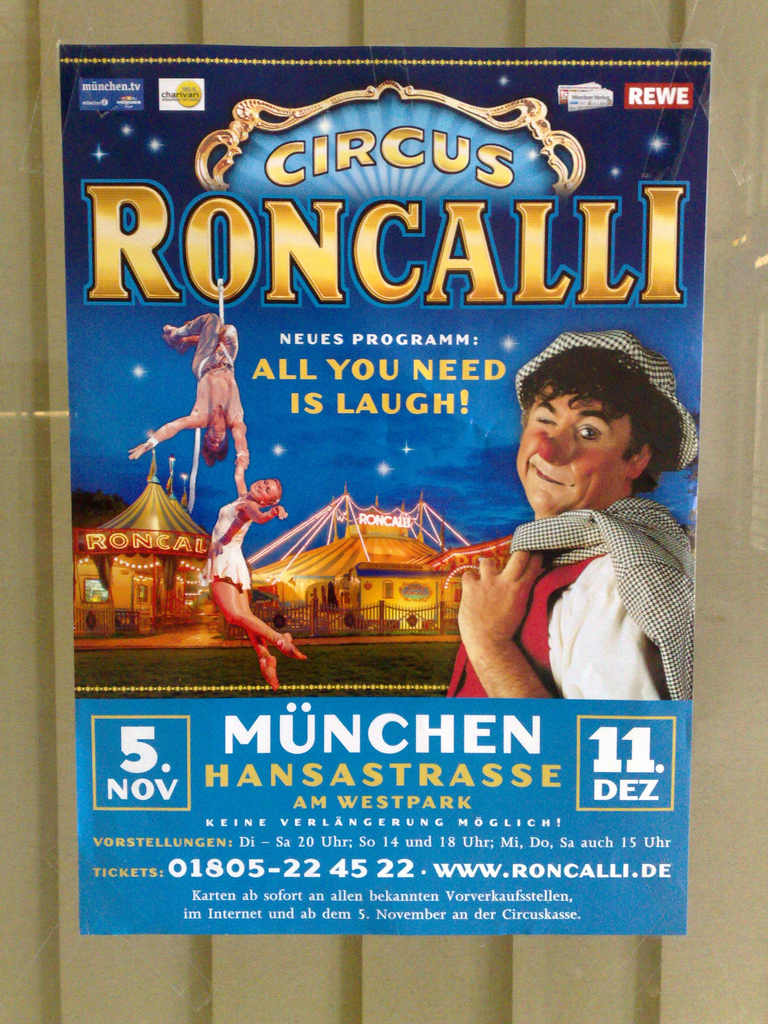 I snapped a photo and then Oliver and headed off for the BMW Museum near Munich’s Olympic Park (a fruitful diversion, but not something I would go out of my way to visit unless you’re a fan of brand BMW).

We met up with Catherine back at the central station at 6:00 p.m. and I proposed the idea of seeking out the circus (we were fresh off watching the PBS series Circus, and so well-primed for the opportunity). Catherine was enthusiastic, and so we decided to find the circus first, then find something for supper.

Unfortunately the Circus Roncalli website is almost completely unusable on an iPod Touch, the only web-connected device we had between us, and so exactly where to find the circus was somewhat unclear.

I consulted the U-bahn map and spotted a Westpark stop and reasoned that if we simply took the U-bahn to that stop and wandered around, we’d likely find the circus.

When we emerged into the chilly Munich night at Westpark there was no circus in evidence. I popped in to a fried chicken shack to seek directions and the clerk there looked at me as though I was on the wrong planet – “you’ll need to take at least 3 buses to get there,” she said.

I decided to ignore her advice, as it wasn’t hopeful enough.

Looking again at the map, I reasoned that the circus must be in Westpark, the park, which appeared to be just up the road. So we headed in that direction on foot. The sidewalk gradually deteriorated as we entered an area of road construction, but we forged on. Eventually we came to a highway overpass that seemed unpassable by pedestrians, but I spotted an underpass that seemed to lead into a park – a park! just what we were looking for! – and so we headed down, passing, it seems in retrospect, into the heart of the construction zone, with its machinery and muck and general chaos.

By the time we ended up in darkness, tripping into a (shallow) hole that we couldn’t see, we reasoned it was time to abandon ship. We made our way back to civilization and stopped in at a gas station and asked the clerk to call a cab for us. She decided she couldn’t do this, but would, instead, give us the address of the gas station and the number of a cab company.

I tried, in vain, to call a cab. And so I did what I should have done in the first place: I called the number on the Circus Roncalli poster.

A very pleasant woman in the box office answered on the first ring. She spoke English. She confirmed that we were in the wrong place: yes, the circus was at Westpark, but at the other end, the far away other end of the park. We needed to take a cab. But tickets were still available, so if we hurried – it was now almost half past seven – we could still make the show.

At this exact moment Catherine, using some sort of voodoo magic that I don’t completely understand, made a taxi stop immediately in front of us. We got in. I showed the driver the circus poster on my phone. He drove us there in 10 minutes (it would have been a very long walk should we have been able to find our way through the muck). He dropped us directly in front of the box office. We gave him a healthy tip.

Lest you think our troubles were now over, it turns out that (a) circus tickets in Germany are expensive (or at least more expensive than the $2 I remember paying when the circus came to town in the 1970s in rural Ontario) and (b) you cannot pay for circus tickets with a credit card.

The total cost for the three of us was 86 EUR – about $110. I got out my wallet (we weren’t walking away at this point) and scoured my pocket for change. By some miracle, I managed to cobble together exactly 86 EUR.  I mean exactly, like “oh, and here’s the last 10 cents!”

Tickets in hand, we joined the line and got a look at the circus tent from the outside: 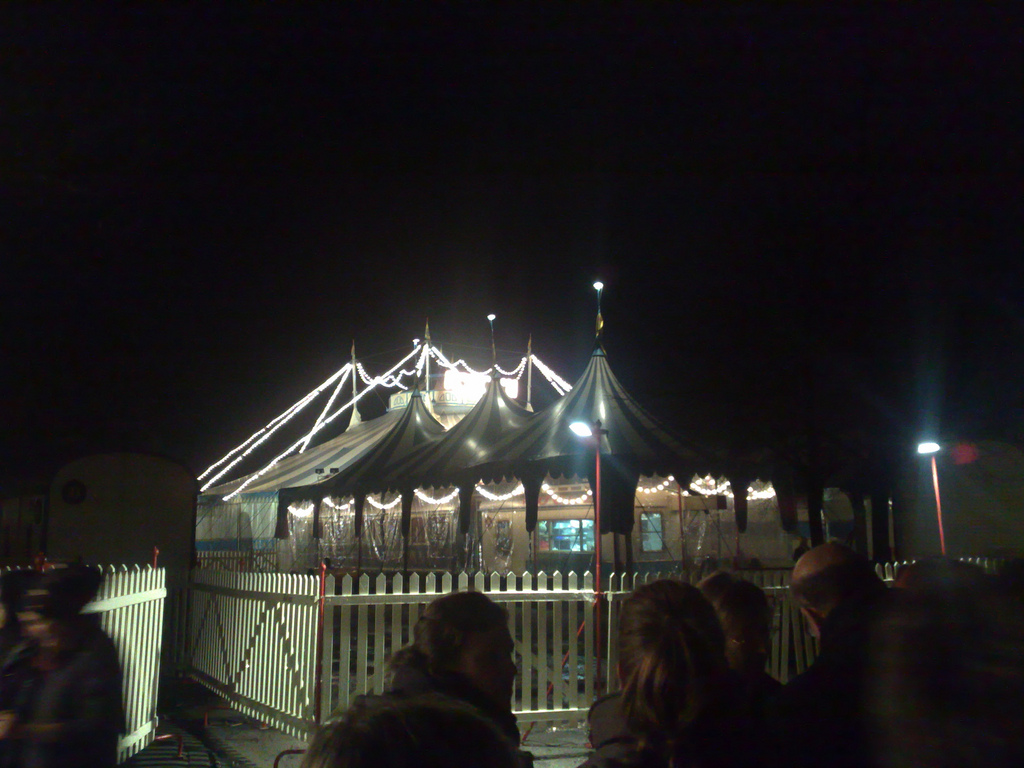 About 10 minutes later the line started moving forward and we made our way to Section B and found a seat, picking up some pretzels and popcorn with the dregs of Catherine’s change purse on the way. 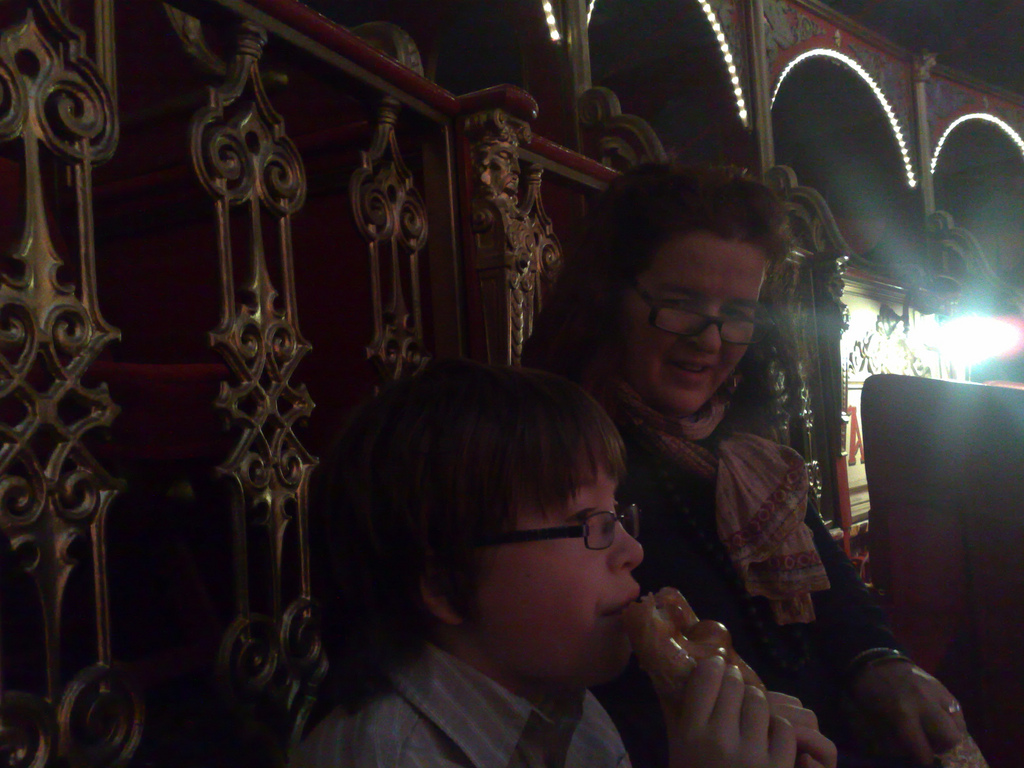 The crowd – the tent was almost full – was mostly adults; I think Oliver may have been one of only 2 or 3 people under 18. A school night, I imagine; not time for family circus night. The ring awaited, bathed in spotlights: 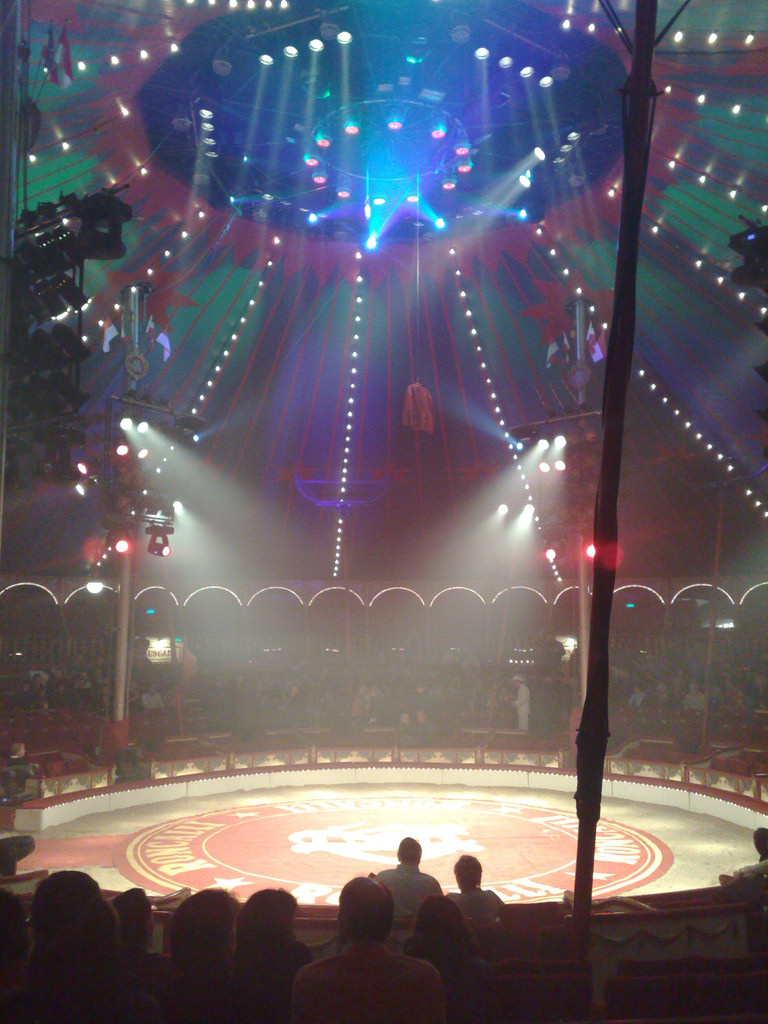 And at 8:00 p.m. a Boomer Gallant-like janitor figure walked into the ring, transformed himself into a clown, and the circus began. 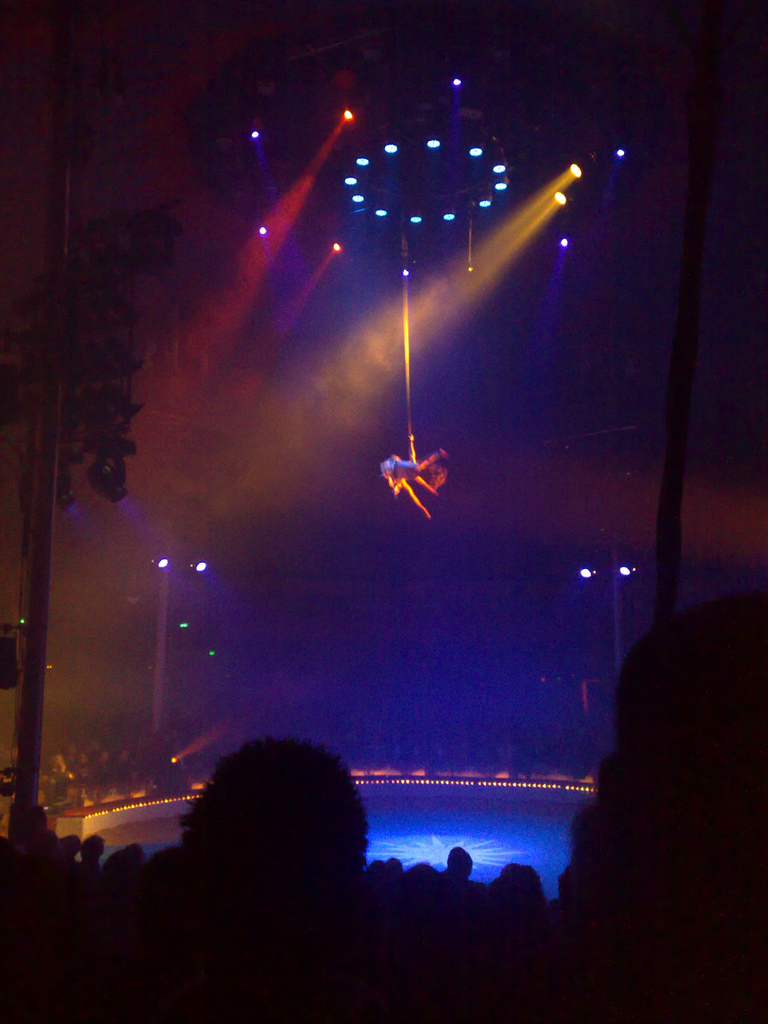 We headed off into a now-drizzling night and asked for directions to the bus home, which turned out to leave just around the corner. An hour and a bus and tram right later, we were snug in our beds, ready to catch the plane back to Charlottetown in the morning.