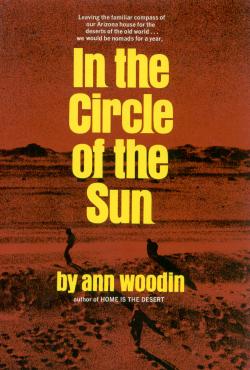 In the late 1960s, Ann Woodin and her family set off to explore the deserts of Asia and Africa in a convoy of VW Microbus and Land Rover. In all, their party included Woodin and her husband, their four sons (aged eleven through sixteen), and three friends of the family. Their nominal route was “Calcutta to Casablanca,” and their interest in deserts appears to have stemmed from their work and life in Arizona.


Despite my strong interest in long driving expeditions, I couldn’t quite bring myself to read this book all the way through. There were two main reasons for this, both stylistic.


First, Woodin is an overly self-reflective writer, and the book is filled with passages like this one from the closing chapter:


If I am unconscious of my own inner being, can I perceive what is and speak out of that with a true voice? Unaware, I cannot live things out in flesh and blood, and I will have to steal images from other eyes and talk in borrowed voice. In the darkness of an unrealized spirit, I will continue being confused, fearful, grasping.

One can only take so much of that until it feels like being pummelled to death by words.


More frustrating still is Woodin’s style for relating the journey: rather than an integrated, meaningful story of a long voyage, what we get is a rather disconnected series of vignettes. One day they’re in Cambodia, the next day in Bangkok, and there’s no suggestion as to how they got from one place to the other. To add to this confusion, each dated sub-chapter is titled for the night’s destination rather than for the subject of the day’s activity, which makes it difficult to tie together what’s already disconnected to begin with.


The expedition began in Tokyo, and headed west from there to Hong Kong, Cambodia, Bangkok and Calcutta by air, and then from Calcutta west overland:


Our last day in Calcutta is ending. The boys are listening to Indian classical music which sounds, in parts, like rock and roll. Bill and the Latifs are examining maps. And I am thinking of our vehicle parked in the driveway. We have christened it the Sand Fish in hopes that it will prove as able to survive in the desert as the lizard of that name. The new cupboards have been filled with food, the water tank with twenty gallons of boiled water, the gas tank with gas at a dollar per gallon.

From Calcutta, they travelled to Agra, Delhi, Kabul, Meshed, Baghdad, Amman, Jidda, Aden and, Nairobi. After a break of two months in Switzerland (reached by air), they went on to Athens, Cairo, and through Libya to Algeria where their desert journey ended at Casablanca. 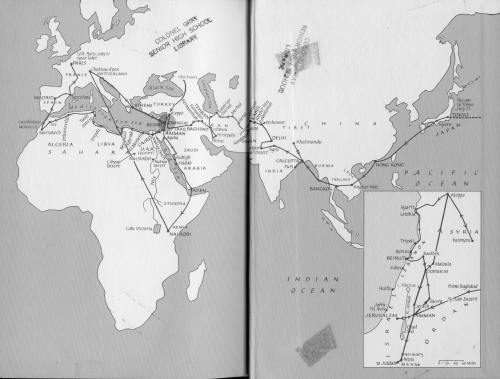 Over the course of the journey various members of the party drop in and out — certain children go off to study, family friends leave and rejoin, and so on. The author is the only constant, for she is with the journey from beginning to end.


Despite the stylistic problems, which make an enjoyable read through of the book next to impossible for all but the spiritually attuned, the notion of picking up a large family, including 4 teenagers, and heading off across Asia, is a brave and intriguing one, and perhaps it’s the possibility of doing so, rather than the details of the voyage itself, which is where the real value of this book lies.


In the Circle of the Sun was a gift from my friend Gary the bookseller, in December of 2002. It was formerly resident in the Colonel Gray Senior High School Library in Charlottetown, where it appears never to have been checked out. It is out of print, but used copies are available from Amazon.com.