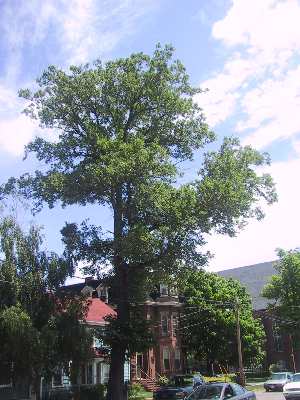 Catherine and I, and by genetic association Oliver, are last minute people. Raised mostly rural but weaned into the instant world of the Big City, we are used to waiting until the last possible date to conduct the important actions of life.


In no ritual is this more true than in the procurement of the Christmas Tree.


I am infamous in my family for having obtained a Christmas Tree without payment one year (sometimes called “stealing” if you’re not willing to be generous). What’s worst, the source of said tree was the local Optimist Club, stealing from which is tantamount to stealing from the church, but with the added risk of turning Optimists into Pessimists.


To my credit, the circumstances were special: it was Christmas Eve, after supper, and I had left tree-getting far too late. In my naive haze, I headed up to the four corners of downtown Carlisle to buy a tree from the Optimist’s stand. But, of course, they had all happyily go luckily gone home to their families, leaving their lot untended. Just before I headed home empty handed, I spied a lone Christmas tree, someone bedraggled, leaning in the far corner of the lot. Reasoning that the tree would otherwise go to waste, I decided to liberate it from its solitude, and proudly brought it home.


In the family canon, alas, this story is always related not as “the year that Peter saved Christmas,” but rather as “the year Peter stole a tree from the Optimists.”


This year, true to form, Catherine and Oliver and I left the Christmas Tree to the Last Minute. Our normal procrastination would have seen us out this weekend, however we were all waylaid last week with some variation of the Evil Stomach Flu, and therefore were in no shape, physically or emotionally, to do so.


Finally, last night, we pucked up our Christmas Spirit and headed out.


Our route went roughly like this: up Mount Edward Rd. to Belvedere to the a Christmas Tree stand reported to have been there earlier in the day. That wasn’t. Across to the Superstore parking lot. No trees. Out to Sobeys and Canadian Tire. No trees. Out Rte. 2 almost to Hunter River to the Silver Bell Christmas Tree farm (where Catherine claimed, they would assuredly have trees, that being their metier). “Sold Out. Closed For Season. Happy Holidays.”


After two hours in the car, with Oliver feeling that our promises of the delightful glee of the Christmas Tree gathering were lies, all lies, we went for Indian Food and gave up, resigned to spending a Christmas with presents gaily arranged, well, beside the couch.


When we returned home, Catherine changed tactics from “aimless wandering” to “targeted assault.”


David Smith runs a Christmas Tree farm in Toronto, which is a small village just south of Cavendish. He supplies all the trees to the Sobeys parking lots in Charlottetown.


Marilyn phoned Carol who phoned Catherine and Catherine phoned David Smith. He told us we could come out this morning and cut ourselves a tree.


Which is exactly what we did.


In a little snowshower worthy of Norman Rockwell, we met David Smith at his farm, he lent us a bow saw, and we headed out into the tree patch. After quickly finding the perfect tree, we tried to figure out whether or not it would fit in the car: we reasoned that if the tree was about 5 inches taller than me, that if I could fit in the back of the car, so could the tree.


This reasoning, of course, left out the important fact that the girth of the tree was substantially more than the girth of me.


Not to be defeated so late in the game, we rearranged Oliver’s car seat, moved various piles of stuff around, and the tree fit in the car with half an inch to spare.


When we tracked down David Smith to return the bow saw and pay for the tree, we told him that Charlottetown was plumb sold out of trees. He said he knew this, being the supplier of the trees. But he’d simply figured that everyone must have had a tree by now. Obviously he’d never met our family before.


And that is how, with the help of friendly Islanders, we came to have a Christmas Tree from Toronto gracing our living room this year. Thank you to Carol, Marilyn and David and his family.


And a Merry Christmas to all.

I didn’t know that you stole a Christmas Tree from the Optimists. Obviously I was shielded from your deviant criminal past.

What a wonderful story! If the optimists found out about the stolen tree I’m sure they would have said ‘i hope that stolen tree really lit up the thiefs home’.