Several of my recent procrastinations came crashing together tonight. Earlier in the week I did some experiments scraping of Charlottetown City Council minutes. Back in November, I documented a method for grabbing PEI civic address data into a local database. And my Interactive Charlottetown Transit Map and RealCharlottetown.com projects have taken me into the world of “Google Maps mashups.”

So what happens when you take all those projects and jumble them together? The Charlottetown City Council Minutes: Addresses Mentioned map. It looks like this: 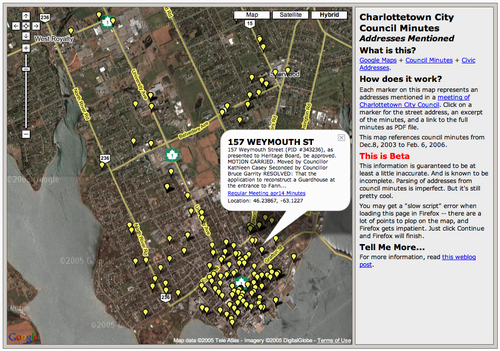 Here’s how I made it:

The process is, of course, imperfect. My address matching could be better. My process for grabbing the “excerpt” of the minutes could use some work. Sometimes the minutes don’t record a street number, so I don’t pick up a match. And of course the minutes don’t necessarily record every mention of an address at council meetings. But it’s still a pretty neat way of visualizing council business geographically.

Take note that the page might take a slightly long time to load, especially in Safari. Firefox might complain “a script on this page is taking too long” (you can just click “Continue). And I haven’t tested this, as yet, in any version of Internet Explorer.

I’ll cobble together an open source release of the source code for all this ASAP. Comments welcome.

Oh my! 78 Crestwood! What a trouble maker!

It’s awesome that you’re setting all these google maps up for us… They really help sort out a lot of information that otherwise, many people woulnd’t bother reading. Keep up the good work and thank you.