The Guardian reported on March 7, 1956 that the PEI Federation of Agriculture, in its annual report to the Legislature, “used strong language in denouncing the municipalities for violating the Time Uniformity Act and reiterated that Standard Time be maintained, if necessary, by adding disciplinary sections to the Act.” 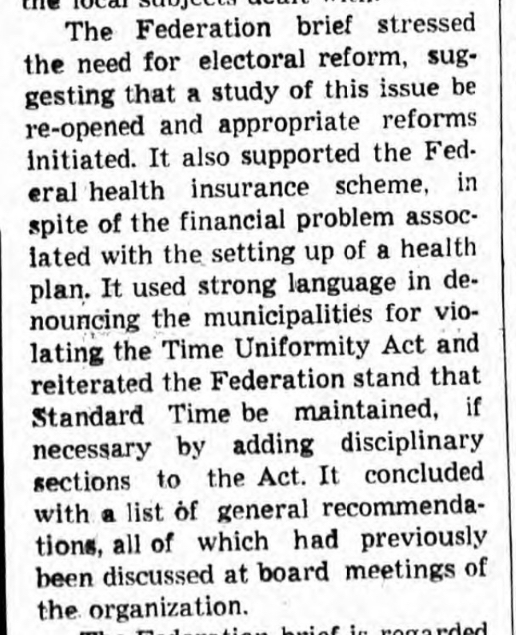 What was the PEI Federation of Agriculture concerned with?

Or what was otherwise known, in the day, as “fast time.”

Earlier in the same edition of The Guardian is the text of the report from the Federation, which did, indeed, use strong language:

The matter which we now wish to discuss is one of a controversial nature and one which has a number of serious an important aspects. The situation existing in the Province last summer after a number of towns went on fast time in defiance of Provincial legislation was most annoying and unsatisfactory to the public generally and to rural people in particular. In our opinion the offending towns acted in contempt of Parliament and their Town Councils set a most unfortunate example of disregard for law and order. This example is difficult to excuse on any grounds, other than possibly that of immaturity of mind which manifested itself in an irresistible desire to play games with the clock.

There are conditions and situations which may at times justify the use of fast time. These conditions quite likely exist in wartime. In peacetime workers in large cities where much time is consumed both morning and evening in going to and returning from work may have a valid claim for consideration. Cities which are located in the Eastern portion of a Time Zone may receive some benefit but we would point out that neither of these conditions exist in this Province and would suggest that our towns are confusing their wants and their needs.

It has been stated that fast time is a convenience to tourists. This we doubt. We do not think that tourist come to this Province to be served with fare which they may obtain in many other places. The Province of Alberta, which has, we believe, a far greater stake in the tourist industry than do we, operates entirely on Mountain Standard Time. Calgary and Edmonton are large cities and are we believe setting a worthy example of cooperating with the general public in a sane and sensible programme of Time Uniformity.

In large areas of the central United States where agriculture is important, there are many cities much larger than even Charlottetown which out of deference to the convenience and wishes of the farming populations maintain standard time.

On numerous occasions we are told by urban people and public men that agriculture is our most important industry and the welfare and convenience of rural people, one of their chief concerns. The Town Councils of this Province know that rural people dislike and are opposed to fast time. They must realize that the present position of agriculture is not an easy one. It should be realized that farm people are facing sufficient difficulties without having this additional one of fast time imposed on them for unnecessary and apparently frivolous reasons.

The people who advocate fast time are not of necessity early risers. Most good farmers are up in the morning at six o’clock. Is it reasonable to expect them to be out of bed at five o’clock? The most ambitious ones turn out at five o’clock standard time, if they are asked to get up at four o’clock, these farmers and the bed will soon become almost complete strangers.

The newspaper report of a recent meeting of the City Council indicated that in the opinion of that body the only unsatisfactory aspect last summer was the lack of uniformity. In other words, the obstinancy of rural people in adhering to the law. In this connection, we would particularly commend the Women’s Institutes which at Exhibition time operated their portion of the fair on standard time and would in addition point out that at district conventions of the Institutes that resolutions were passed condemning fast time.

The press report also suggested that the City Council recognized the unsuitability of fast time in haymaking and that the resolution as worded to avoid this disadvantage. We have heard no explanation of the manner in which haymaking is to be facilitated, other than it might be either completed in June or postponed to October. We would suggest that if the City Council of Charlottetown is sincere in its desire to promote better urban-rural relations that it desist from any efforts to impose either legally or illegally upon the rural people the very doubtful blessing of advanced time.

To summarize may we repeat that rural people dislike fast time. May we emphasize that in their opinion it is a nuisance and an annoyance and a serious handicap in carrying on farming operations. May we also point out that paramount importance of agriculture in this Province and also point out that any towns which do exist here owe their origin and existence to the efforts of agriculture and for this reason have both a business and a moral responsibility to govern themselves at least in part in conformity with the best interest of our most important industry.

There can be no doubt that our rural people will not be satisfied with nor should be expected to be satisfied with anything less than Uniform Atlantic Standard Time throughout the Province. We, therefore, strongly recommend that any changes made in the Time Uniformity Act will be of such a nature as to strengthen the Act and to provide necessary disciplinary sections which may be applied to municipalities whose Councils hold themselves to be, or act in complete disregard of the Legislature.

Mr. Premier and Honourable Members, the farm people of Prince Edward Island are looking to your for relief from the situation which existed last summer. In most cases you have been elected by rural constituencies and rural votes. We have every confidence that their wishes will be your guide in dealing with this question.

Sure enough, if you read The Guardian for the previous year, there’s ample evidence to demonstrate the defiance. While the Women’s Institute may have run its part of the August Old Home Week fair in Charlottetown on Standard Time, as the Federation reported, the fair itself operated on fast time: 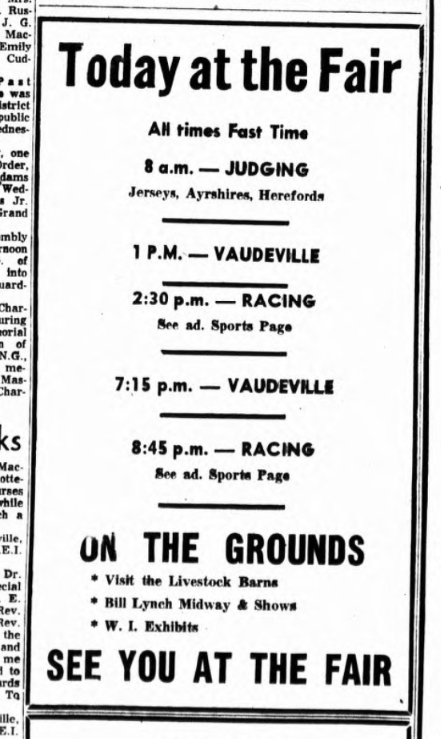 The seeds for all of this were planted two years earlier, when the City of Charlottetown passed a resolution calling for the “unofficial” adoption of daylight time: 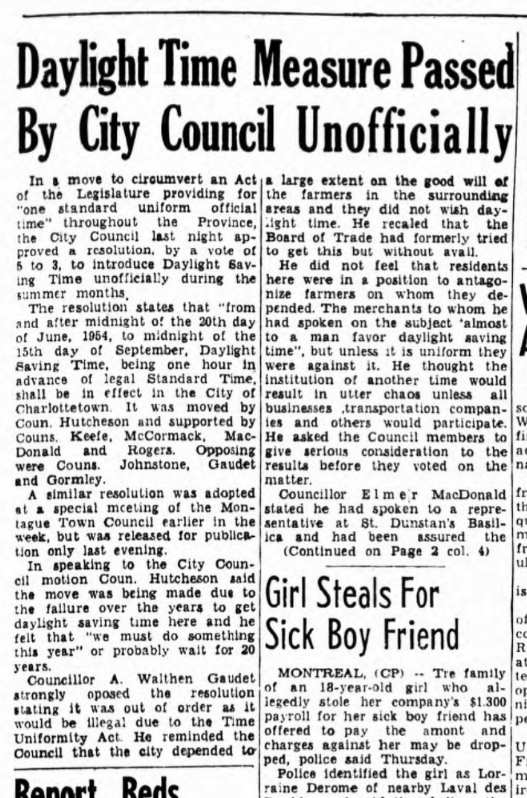 The story continued on the second page, reporting that there was no religious objection to the move, and using the phrase “city time”: 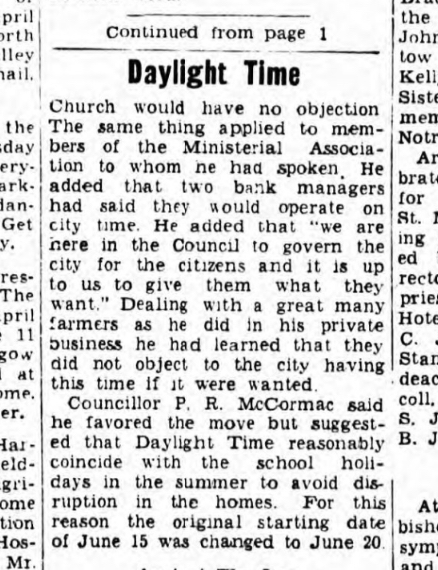 The story finished with the suggestion from Councillor Gaudet that “in flouting the law this Province and city was coming dangerously close to conditions in Germany and Russia,” demonstrating that hyperbole was as alive and well in the council chamber 50 years ago as today.

The following spring, on April 19, 1955, The Guardian reported that Souris was set to adopt fast time, but only if Charlottetown repeated the practice it adopted the previous year: 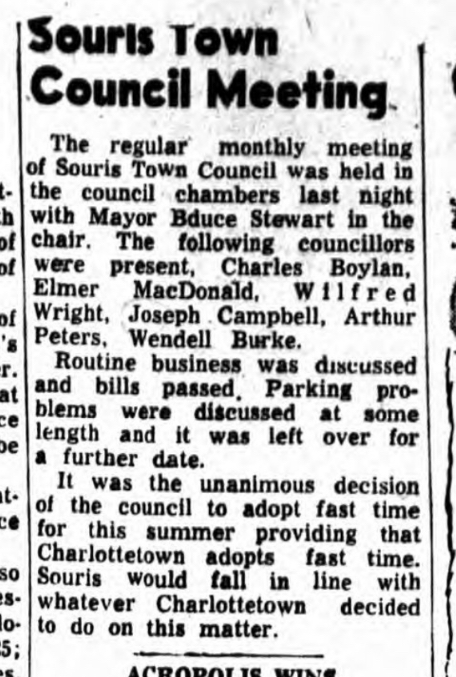 On April 21, 1955 The Guardian reported that Summerside passed a similar resolution, albeit without the Charlottetown-proviso: 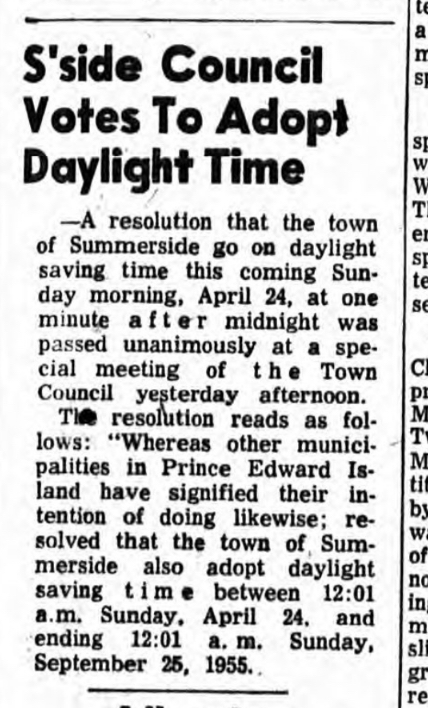 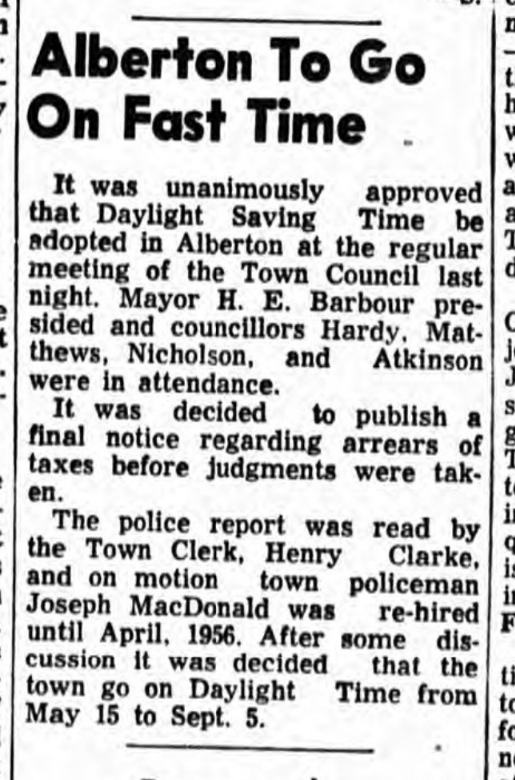 The big announcement from Charlottetown came on June 3, 1955, with a front page story in The Guardian (note that the founding of the Kiwanis Dairy Bar in Victoria Park was also considered at that same meeting; it’s there still): 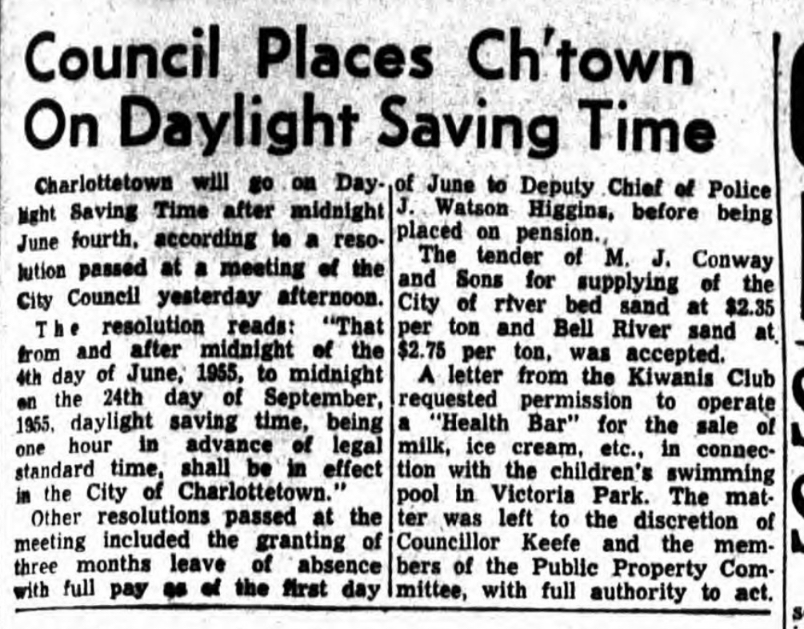 As you might imagine, having a province that was simultaneously running its rural parts on one time and its urban parts on another resulted in more confusion than that brought on by the Women’s Institute operating its Old Home Week booths on  standard time while the rest of the fair operated on fast time. Take the trains for example, now long-gone, but at that time still running. They opted to keep their schedules on Standard Time when they announced a schedule update on April 22, 1955 in the midst of the swirling divergence:

I became interested in all of this when I returned to some research I started in 2014 on the history of time in Prince Edward Island, in part to determine whether PEI requires its own time zone in the IANA Time Zone Database.

Simon Lloyd, Special Collections librarian at Robertson Library, helpfully assembled some relevant legislation for me in this regard, and among the materials he sent me was a copy of the 1956 Act to Amend The Time Uniformity Act. This piece of legislation says, in essence, “we’re using Atlantic Time on the Island, and if you’ve got a city, town or village that refuses to, we’re not giving you your grants anymore.” 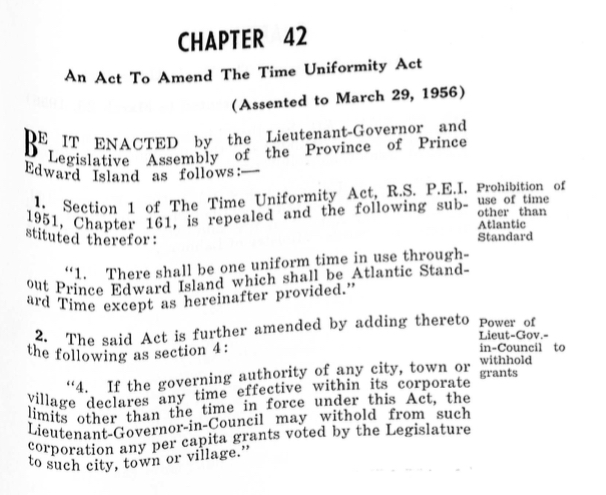 This was the legislature’s reaction, one assumes, to the call from the PEI Federation of Agriculture for “necessary disciplinary sections which may be applied to municipalities whose Councils hold themselves to be, or act in complete disregard of the Legislature” in its report earlier in the month.

The passage of this amending legislation was not itself without controversy; indeed an opposite resolution, to allow urban areas permission to use daylight time, was “quashed” only 10 days earlier, as The Guardian reported on March 16, 1956 on the front page:

The paper’s report details the debate, and finishes with this:

Hon. Mr. MacDonald: “Are you for or against it?”

Mr. MacDonald: “Are you willing to see the city people set their clocks an hour ahead?”

Mr. Bell: “They got along all right last year.”

Mr. MacIsaac, the seconder of the resolution said the matter should not be a case of Country vs. City. “I am not convinced with the arguments of the rural members. It just doesn’t add up”, he added, “When we had daylight time during the war, the hay was made and the cows gave just as much milk, I cannot see why they can’t still do it.”

After the Leader of the Opposition had discussed the resolution briefly in Committee Mr. G.E. Saville moved that the Speaker take the chair, thus quashing the motion.

It was only six years later that the provincial wind changed direction. The Guardian on April 11, 1963 reported “Daylight Time Slated for PEI This Year” and mentioned that, unlike previous years, the PEI Federation of Agriculture had not included a call to continue Standard Time in its annual brief that year: 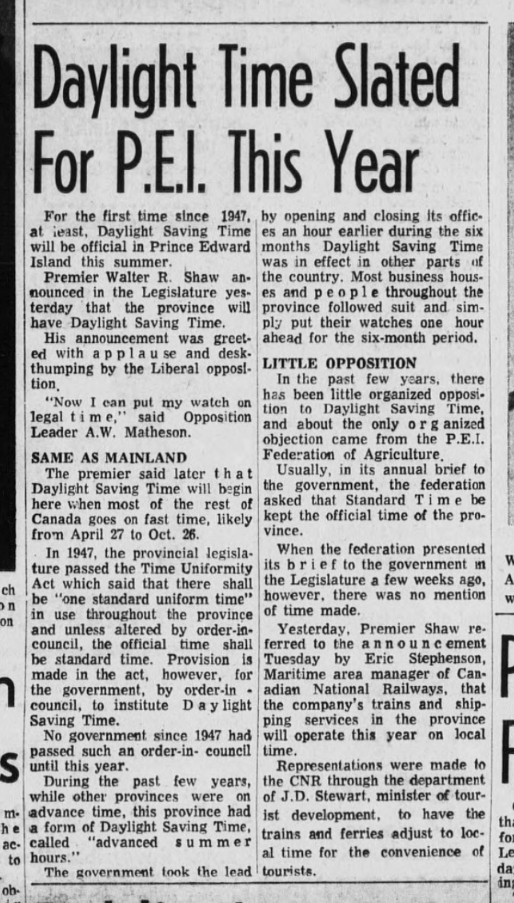 Prince Edward Island has been practicing Daylight Saving Time ever since.

Beyond the insights into the rural-urban divide in Prince Edward Island, this compelling saga does, indeed, bolster the case for an America/Charlottetown entry in the IANA Time Zone Database, as the adoption of Daylight Saving Time here, provincially, happened on a different schedule than either America/Halifax, America/Moncton, or America/Glace_Bay, which are the only other time zone entries in the region.

I’ll continue to prepare the documentation to this effect.

I am a urban person not a rural person.

in the nautical sense.