My new Mac mini is scheduled for delivery today, and I received an SMS from Apple this morning alerting me: 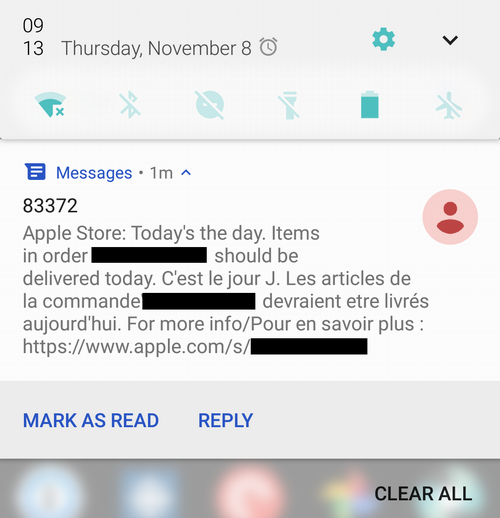 Because this is bilingual Canada, the alert was in both English and French, and I noticed that the French version of “Today’s the day” was “C’est le jour J.” I initially though the “J” was an errant character, but it turns out that “le jour J” has become a generic French term for “the big day”:

Le jour J and, to a lesser extent, D-Day can also be used by civilians, as a figurative reference to an important event, similar to saying “the big day” in English. While jour J can be used for happy occasions like parties, D-Day is limited to events that one doesn’t look forward to, like a deadline, perhaps because it’s easy to imagine D standing for doom or disaster.

The terms D-day and H-hour are used for the day and hour on which a combat attack or operation is to be initiated. They designate the day and hour of the operation when the day and hour have not yet been determined, or where secrecy is essential. The letters are derived from the words for which they stand, “D” for the day of the invasion and “H” for the hour operations actually begin. There is but one D-day and one H-hour for all units participating in a given operation. It is unnecessary to state that H-hour is on D-day.

The military has a raft of letter-designations for days and hours, including E-day (“the unnamed day on which a NATO exercise commences”) and P-day (” the expected date at which the rate of production of a consumable equals the rate at which the item is required by the Armed Forces”).