I first met Jeff Eagar when the PEI Home and School Federation hired him to shoot and edit a short film about the Island’s universal provincial school food program.

Tonight, as I was waiting to pick up our food at Richard’s, Jeff said hello, and we had a chat.

He was just back from India, he told me, a trip planned in part to recognize the 20th anniversary of Bang7, a holiday that Jeff invented in 1999 with his brothers, and that they–and an increasing number of their friends and familiars–have celebrated every year since.

Happiness.  Good health.  Love.  These are simple concepts buried under skinny jeans, social media hashtags and shiny, new cell phones. Society is lost in a culture fixated on possessions, appearance and impatience.  Contentment seems illusive in today’s manic and ‘wired’ world.  It’s a problem that affects nearly all of us and it’s this reason that 20 years ago us brothers created the unique holiday Bang 7 – Life Day.

Twenty years ago in the tiny remote town of Pushkar in the Rajasthan desert of western India us brothers decided we needed something that would remind us of what is actually important in life.  We needed something that would keep us grounded and remind us of what truly makes us happy.  We had been travelling through India for months with little more than a backpack and a few basic provisions, but we were happy, healthy and content; a simple and fulfilling existence.  Sunsets had beauty, food had flavour, conversations with strangers were fun.  So on June 7th, back in 1999, in a wonderful moment of simplicity and clarity, we created Bang 7 – Life Day in order to never forget what life is truly about.  Since that day, every year on the 7th of June, we have been taking that day to celebrate life, love, our health and the people around us.  In addition, we have been sharing the celebration with as many people as we can around the world.  Whether you are Indian, American or Japanese, regardless if you’re black or white, female or male, Sikh or Christian it’s all the same, Bang 7 is for everyone.

Given the spirit of Bang7, it’s kind of appropriate that I reconnected with Jeff at Richard’s: a visit there is one of Catherine’s favourite summertime things to do, and yet our last time there was in August of 2016, two years ago.

There are myriad reasons for our long absence: some, like “when you’re on chemo everything tastes like metal” are completely understandable.

But there’s also a good dose of forgetting to do the things that really matter that was responsible, and I’m happy that we took the effort today, and thus got a reminder of “what is actually important in life.”

I’m happy to report that Richard’s is better than ever–with the long lines to match: the fish and chips were simply fantastic, the sun was shining, and the summertime vibe everywhere. 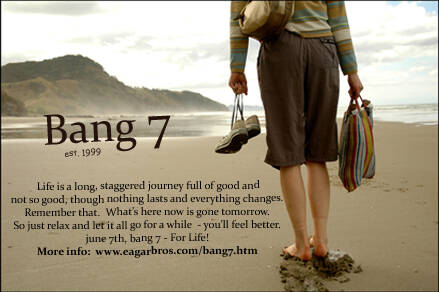