Of all the people I know, the one least likely to have become a “cat person” is Kevin O’Brien. Kevin’s persona is approximately 33% Rex Murphy, 33% Irish dockworker and 33% Truman Capote; these are not personae that one tends to equate with satisfied cat ownership, to say nothing of devoted cat obsession.


But it has happened: Kevin is a bona fide cat guy. At first it was the “hey, did you hear what my cat did last night?” witty anecdotes; now he’s graduated to full-fledged “hey, here’s a picture of my cat doing something funny!” Witness: 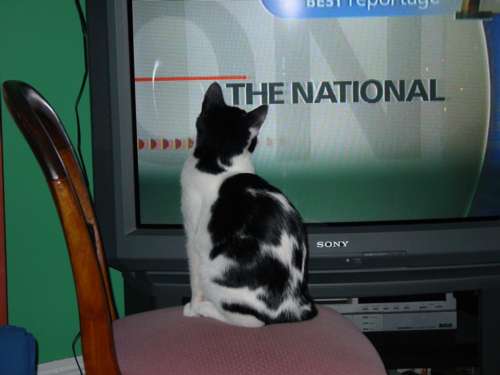 Pictured is a cat named Supernews (nickname “Dooder”), brother of a cat named Snack; Kevin describes Dooder as “engaging in one of his favourite pasttimes.”


It can’t be too long now before we see cats appearing in ISN ads. And after that, it’s clear sailing through to the personalized cat-themed license plates.


I remain, faithfully yours, a dog person, through and through.

Capote? I don’t get that part but the rest is fair comment.

And for you Pete, a dog person, note the floppy-eared dog face on Dooder’s left side. When he walks across the floor it looks as if the (presumably a Border Collie / Cockapoo cross) looks as if he’s scanning the light fixtures for flies. And, on top of that, Dooder behaves more like a Dog (I’m a dog person too) than any cat I’ve ever seen…

I’m a rabbit person. I have a rabbit, her name is Sandy. She is turning 8 years old this month. Did I mention she’s litter trained?

I used to scoff at cat people also, until we adopted a stray kitten which is now an over-pampered member of the family with veto power over every household decision. My cat is very dog-like also, but maybe we convince ourselves of this to overcome our shame at being cat crazy.

I think I get the Capote part. I just want to know the missing 1%…