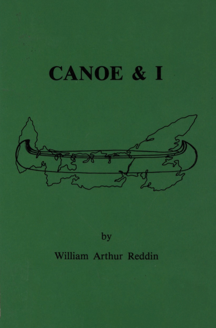 One of my favourite books is Canoe & I or Around the Island in a Canoe (on $10.00) by Bill Reddin, the tale of his quest, starting in 1934, to canoe his way around Prince Edward Island.

His journey, with dog Bozo, begins with a paddle, in his canoe dubbed “Tota,” from Tea Hill to Governor’s Island; upon arriving there he realizes that he’s not brought any fresh water:

Proceeding to prepare our “noon-day dish” I discovered a real blunder — I had forgotten to take any fresh water. Later in the afternoon I set out to explore the Island. Bozo and I walked all over it. We found a number of old farm wells and two or three bored by the Henry L. Docherty oil men in 1926. All were foul.

Meanwhile the wind had risen to a strong gale. I decided to camp in an old shed and wait till the next day before going on to Point Prim.

Our thirst had likewise risen. Strawberry jam helped a little but was too sweet to be much good. I brought up a bucket of salt water from the shore, heated some in a kettle over a Coleman gas stove and held the bucket of cold sea-water over the steam. As the steam condensed on the bottom of the bucket it ran down drop by drop into a saucer and by this primitive still I obtained enough fresh water to let Bozo and me get to sleep.

His journey continues eastward by Point Prim, Belle Creek, Wood Islands (which he insists on calling Wood Island, as he could find only one island), Little Sands, Cape Bear, Murray Harbour, Panmure Island, and finally to Poplar Point, where he puts in for the season and retires to Charlottetown until June of 1935 when he picks up the journey again.

Along the way he provides descriptions of everyday life in Prince Edward Island, and of the people that he meets along the way (people that, more often than not, invite him in for supper and provide him with a place to sleep for the night). An uncommon number of these people are named John Dan, a fact he mentions when he reaches Monticello:

Surf breaking at the shore, I spent most of the day visiting at McCormick’s store, John Dan Maclntyre’s and other houses nearby, sleeping at Mel’s place overnight. (By the way, from Tea Hill to Monticello I met eleven (11) John Dans. How many more I missed, the Lord only knows.)

In 1935 his journey continues around East Point and along the north shore, past St. Peter’s Harbour and Cable Head, Savage Harbour, Stanhope, Rustico, and New London. He passes Cape Tryon and observes the cormorants:

Along the slopes of Cape Tryon about 115 feet high white with bird droppings and, I believe, the highest cliff along our Island shore, the roosting Cormorants (or “Shag” as the fishermen call them) stared down at the little craft passing so close just below their hundred or so nests. This was the only Cormorant Colony I observed on the whole coast.

He continued past Malpeque, Lennox Island, Alberton, Kildare Capes, and Tignish. At almost every stop he seems, somehow, to have a connection. Sometimes this is through his position at Prince of Wales College; for example, in Nail Pond:

Walking back to Nail Pond beach, I met and was warmly greeted by three girls, two being my students at Prince of Wales, Bernetta, and Cecelia, daughters of James Gallant. They had learned earlier from the Summerside Journal-Pioneer that I was coming along the North Shore (though how The Pioneer knew, I do not know). Once they had told my unfriendly French fishermen what I was doing and that I was the girls’ friend, everything changed. So much so that, in my absence, the fishermen had carefully carried Tota well up above the high-tide line to make sure that she would be safe and had pre- pared for me a great big pot of delicious cooked lobsters. I wondered if, perhaps, their initial distrust of an English-speaking stranger could be traced back to the time when their ancestors had been cruelly treated by the English with the Island “Exile of the Acadians.”

He passes Howard’s Cove and West Point and paddles toward Summerside, where he gets stuck on a sandbar and blames The Guardian, which he’d been reading voraciously that morning, having not “seen a newspaper for nearly two months”:

And now my lack of proper preparation and my failure to provide myself with marine charts (I had only a road map of P.E.I.) asserted itself. First thing I knew I was fast aground, or rather amud, in the middle of the Miscouche Shoals, the tide having receded as I paddled blissfully along. I blessed in blue language the dear old Guardian, the cause of my long delay in getting started. I suppose it was really not the Guardian’s fault, but at times like that, one has to have something else to blame for one’s own procrastination.

He continues east from Summerside past Borden (“just as the Carferry S.S. Charlottetown was pulling away from the Pier”), Augustine Cove, Victoria, finally arriving, on the afternoon of September 3, 1935, at Tea Hill.

Canoe & I is written in a breezy, familiar tone and is filled with interesting anecdotes. Even I, not an Islander, and several generations on, have enough familiarity with people and places to recognize more than a few characters (to say nothing of knowing many of Bill’s children, having worked with one of his grandchildren, and having just received word of another great-grandchild on the way).

Why did he make the trip?  In his introduction he says only:

Why did I make the trip? In Maugham’s “The Moon and Sixpence” the hero (villain) is driven by a daemon: “I’ve got to paint, I’ve got to paint!” Perhaps something of the same sort of daemon made me want to “create a picture”.

It is a lovely picture indeed, and an inspiring one: what a crazy idea, to canoe around the Island. And yet what a captivating one, and what adventures he had. It’s a clarion call to seek out audacity.

You can find Canoe & I in the IslandLives.ca collection where you can grab a PDF and read it yourself.

Great summary of Poppy’s book, Peter. It’s been awhile since I read it last, and this reminds me I should dust off my copy now that it’s canoe/kayak season again.

I’ve never heard of this! I need to read it.

Peter, we’re just the men to recreate this journey and transcribe it by radio and by blog. I am only a little bit joking.

Thanks for pointing out this book, which I had heard of, but never thought to look up on Island Lives. I live just down the hill from the late Bill’s house, so can identify with his starting location, and will continue to read the rest of his trip account with interest!