On first blush the Popular Names Directory on the Canada411.ca website (the site through which most of Canada’s telephone companies make their white pages searchable online) is a great resource: for any community on Prince Edward Island you can see a list of the most popular surnames. You start from a page that lists every community in their database (and ignoring the fact that they don’t control or clean up the geodata, leaving you to choose from among Abrahams Village, Abrahms Vlg, Abram Village, Abram’s Village, Abram-Vlg, Abrams Village, Abrams Vlg, or Abrams-Vlg):

From there every community has its own page which, in theory, lists the most popular names in that community, each with the number of listings (I assume) for that name in that community.  Look at Souris, for example, where you’ll find the last starting “Adams (2), Alexander (1), Allen (1), Anderson (1), Andrews (1), Armstrong (1), Arnold (2), Arsenault (2), Austin (2)…”. 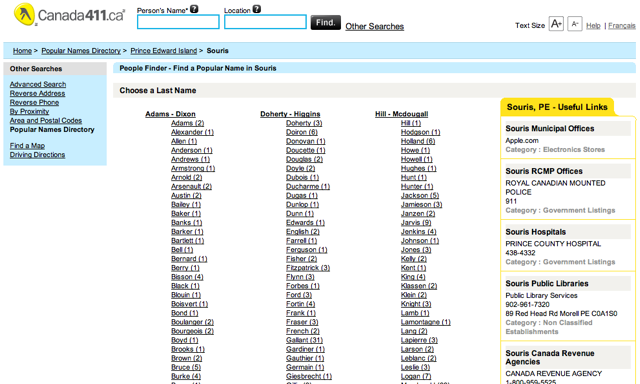 The problem is that this data doesn’t seem to be accurate.  Take Giesbrecht, for example. There’s an interesting name. So I click on it to see who the single Giesbrecht is in Souris only to end up on page with the error message We did not find “Giesbrecht” in “Souris PE”, but we found results in “PE”:

I thought this might be an isolated incident, but it’s the same for Russell in Georgetown, Ford in Miminegash and Morris in Wheatley River. It’s not that everything is wrong — some of the name listings produce real data — but so much of it is inaccurate or broken as to make the resource effectively useless.

Anyone have any idea what’s going wrong here?

No idea what’s wrong where you are. Much easier in Europe, where Canadian Shauna Giesbrecht lived for a while in my Paris apartment. Now has her jewelry studio in rue Véron in Montmartre. Why, she even made my wife’s and my wedding rings. She’s pretty easy to find during opening hours…
http://www.ms3.com/900-Shauna_…