Twelve winters ago my friend Sherin and I ventured into Manchester, NH to experience Presidential Primary night at candidate John Kerry’s headquarters in the Holiday Inn.

Tonight, three general election cycles later, we repeated the trip, armed with a sheaf of candidate rally Eventbrite tickets, to see what we could see.

We started out the night driving to The Executive Court Banquet Facility – “one of New Hampshire’s premier destinations for the perfect wedding reception, corporate event or private party” and a handy four minutes drive from Manchester Airport – for the Donald Trump rally.

As soon as we turned the corner on Mammoth Road (yes) we realized that this would be easier said than done: there wasn’t a parking space within a mile, and there was a long, long, long lineup, snaking all the way around the front of the building, hundreds of people long. As the largest room in the facility holds only 500 people, this appears to have been a classic “book a small room and it will look crazy full” move. It worked. 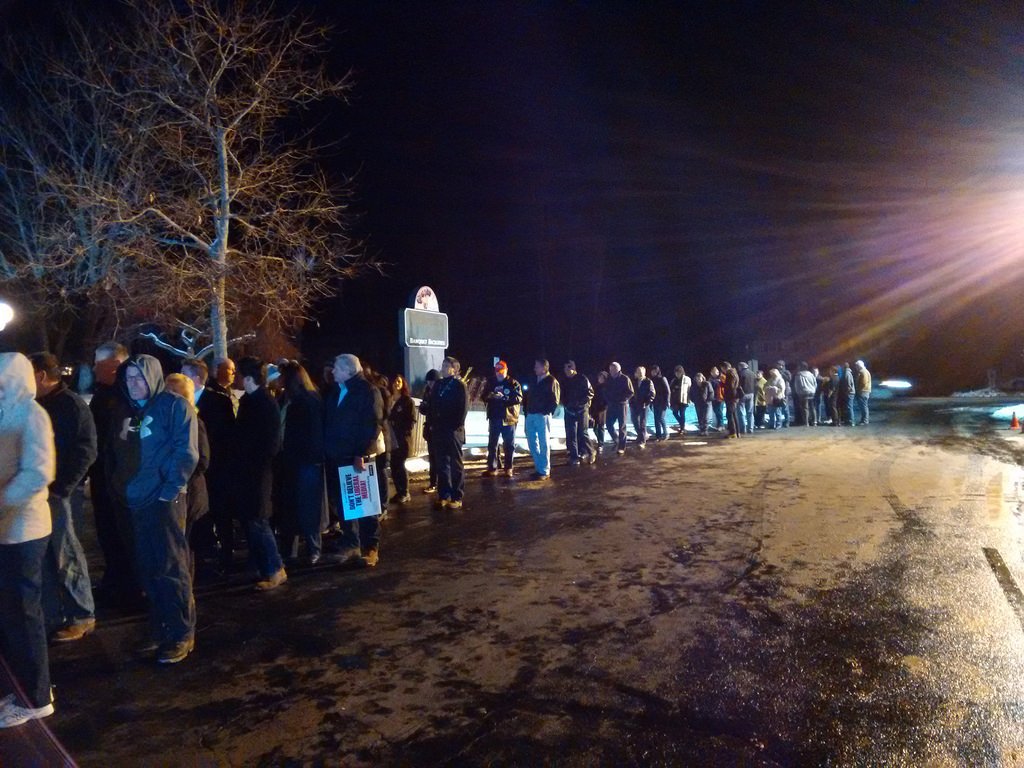 We gave up our Trump dreams and headed north to the Jeb Bush rally at Manchester Community College.

This was a decidedly more sedate affair, where the media appeared to outnumber civilians. The “registration” process was lax (we could have easily skirted it). We were given as many Jeb! stickers as we could take. There was a palpable complete lack of energy. 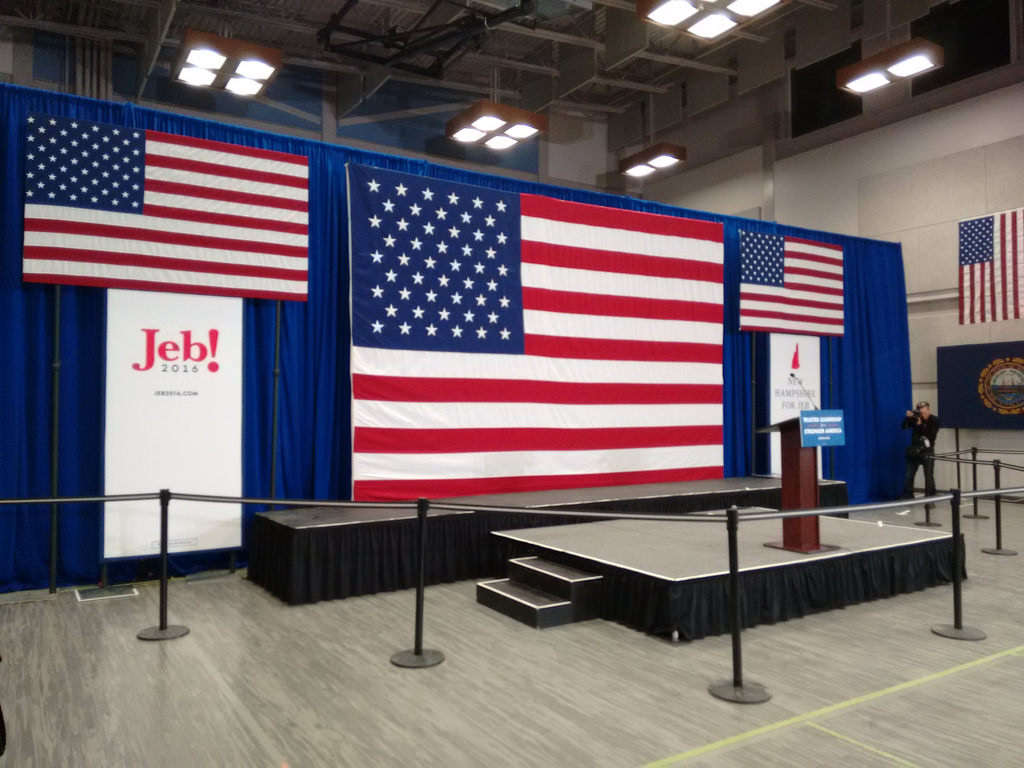 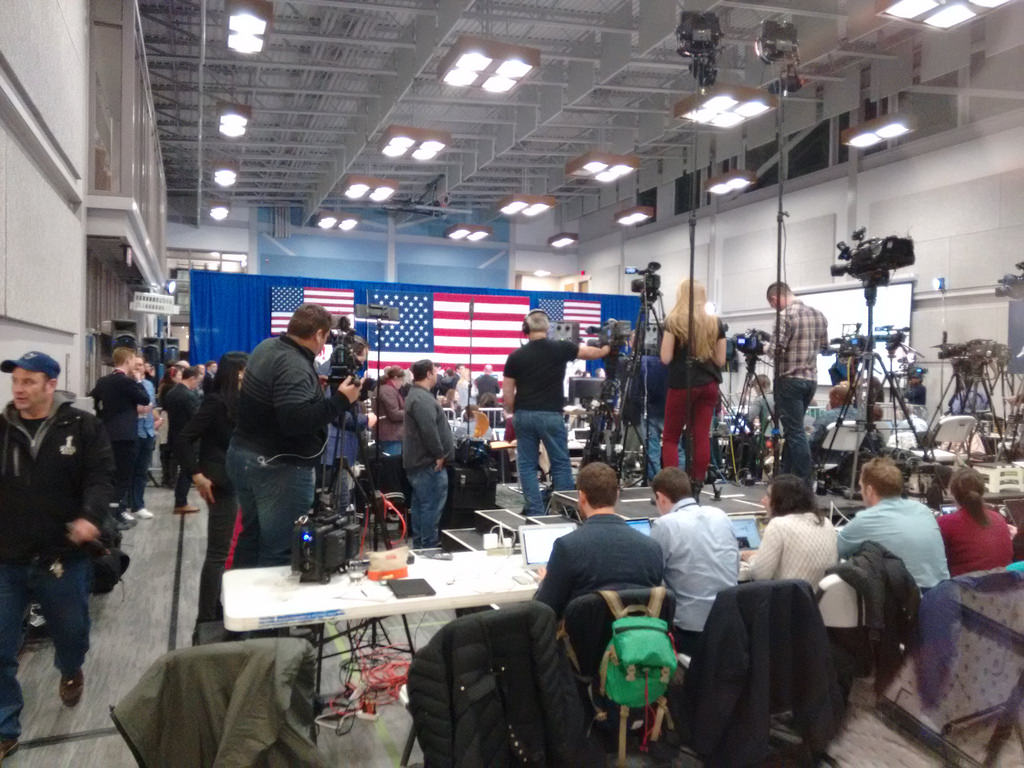 There was, however, a cash bar and free buffet of cheese & crackers and nachos with a very nice hot spinach-artichoke dip: 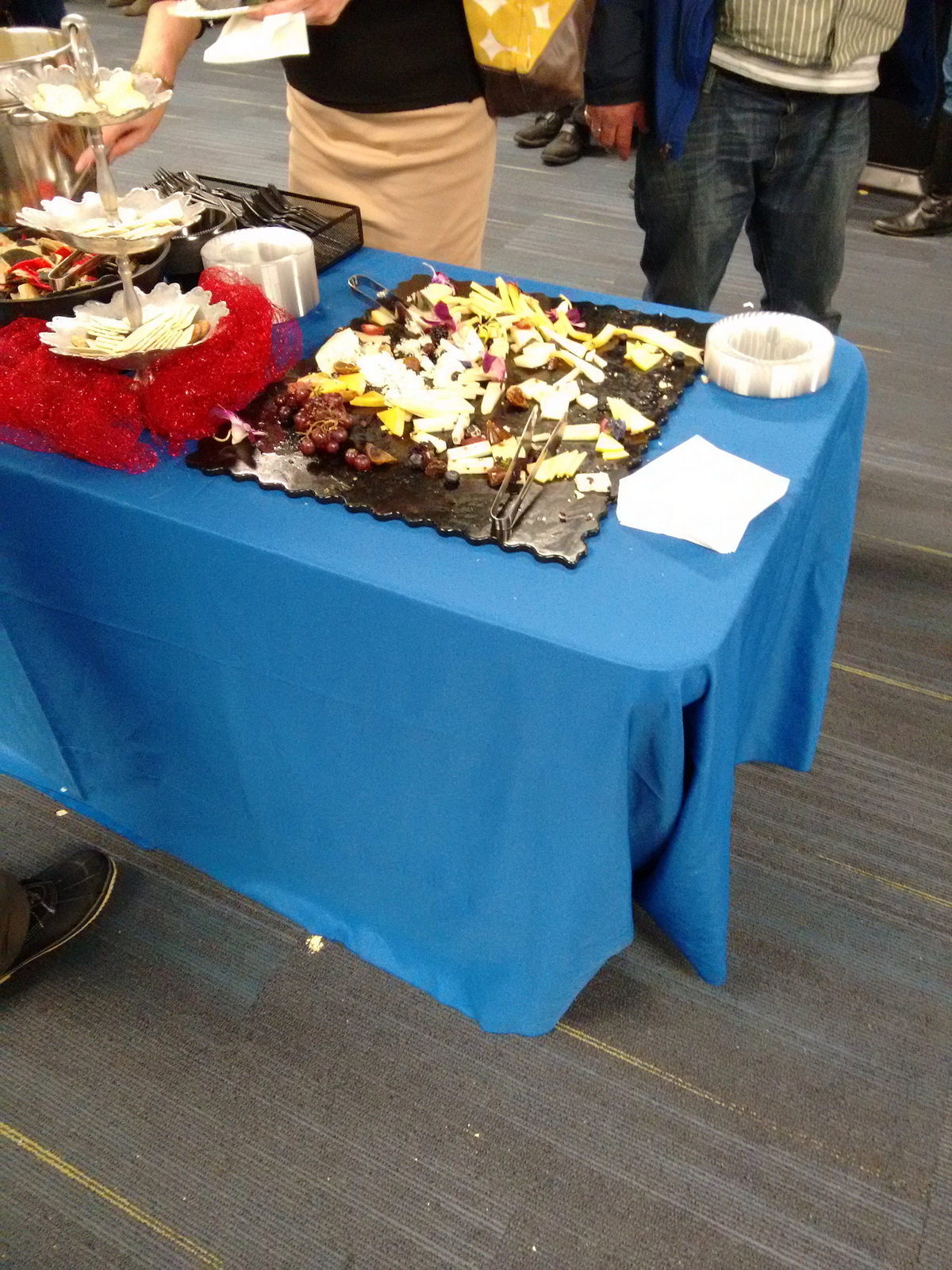 Sherin is very skilled at talking to complete strangers, and so struck up a conversation with a police officer guarding the non-hordes. He was a very nice fellow; we chatted about the Primary, and what it had been like to work the events, and when things would wind down (he said Thursday, after the morning TV programs pull up stakes back to New York).

Without much anything happened at Bush HQ, and with the Hillary Clinton campaign handy by, we set off there next.

Our GPS took us on a circuitous route to Southern New Hampshire University in nearby Hooksett. When we were about half a mile out we hit a traffic jam of cars lined up to get into the parking lot; to find a space to park we had to go to the back of the back back lot and then loop back a good distance to the field house where the rally was being held.

We found our way and arrived at the door, conveniently marked “No Press Entry,” where we were greeted by armed, bullet-proof-vest-wearing Secret Service agents.

We had to empty our pockets of keys and phones and change and then walk through airport-style metal detectors before we were admitted. 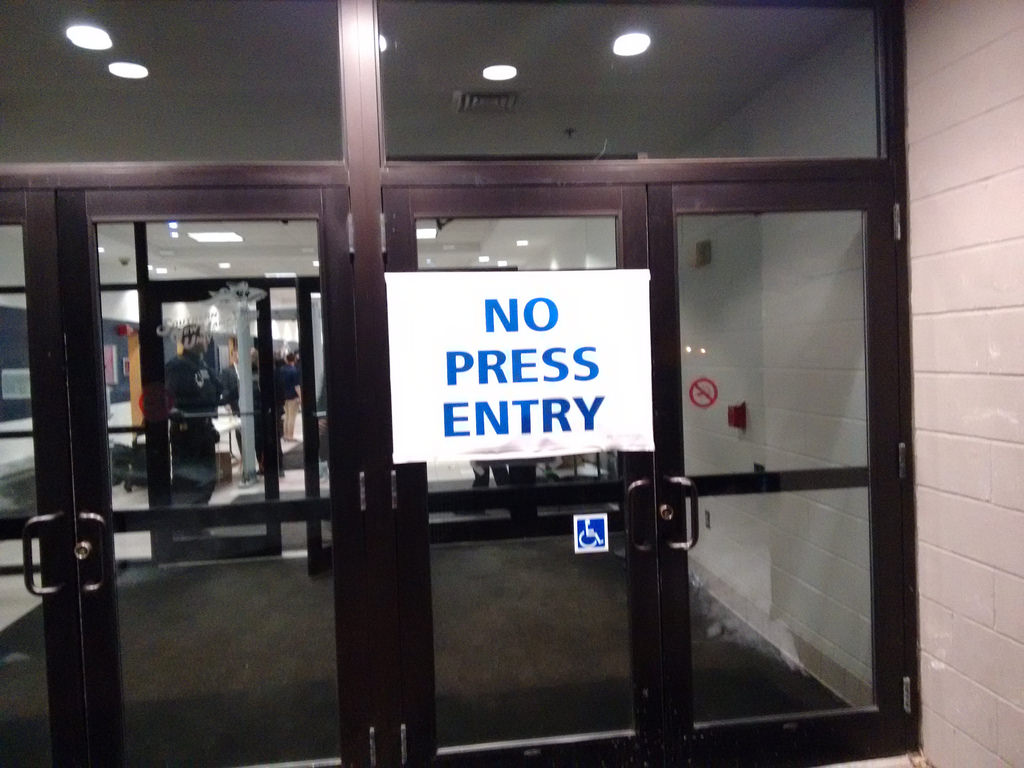 The Clinton rally, like the Bush rally, had a strong media contingent: 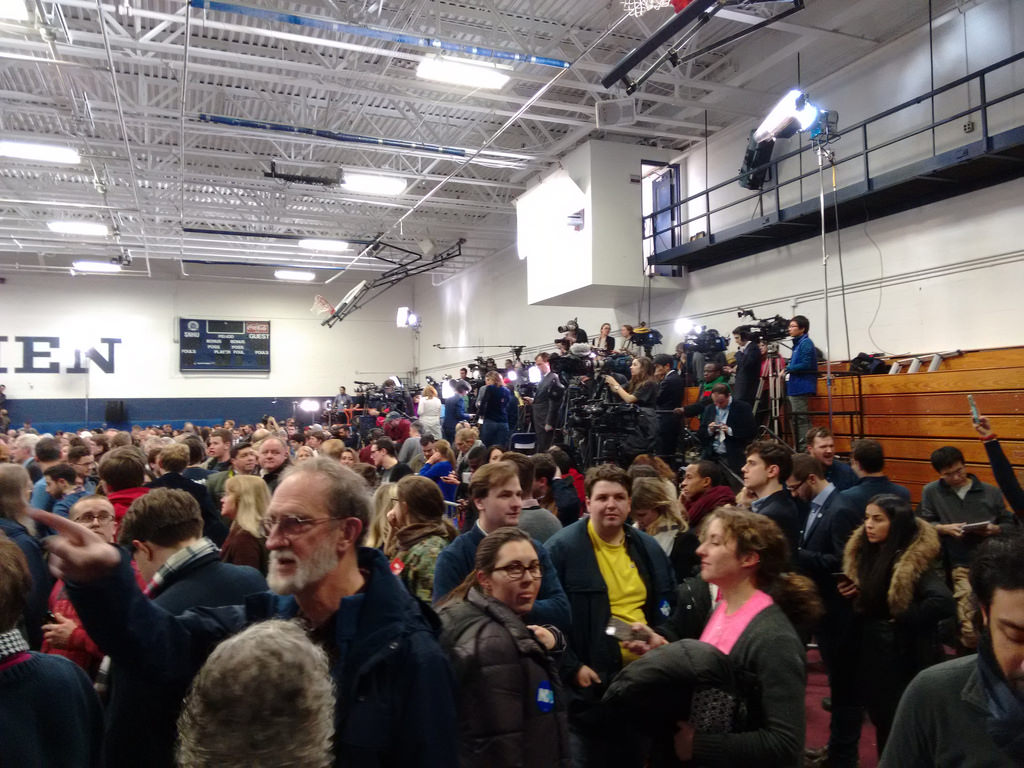 But there was also a much, much bigger crowd of supporters:

There was very loud pep-rally-type music – Taylor Swift, Pharrell and the like. And a VIP balcony populated by people like Ted Danson: 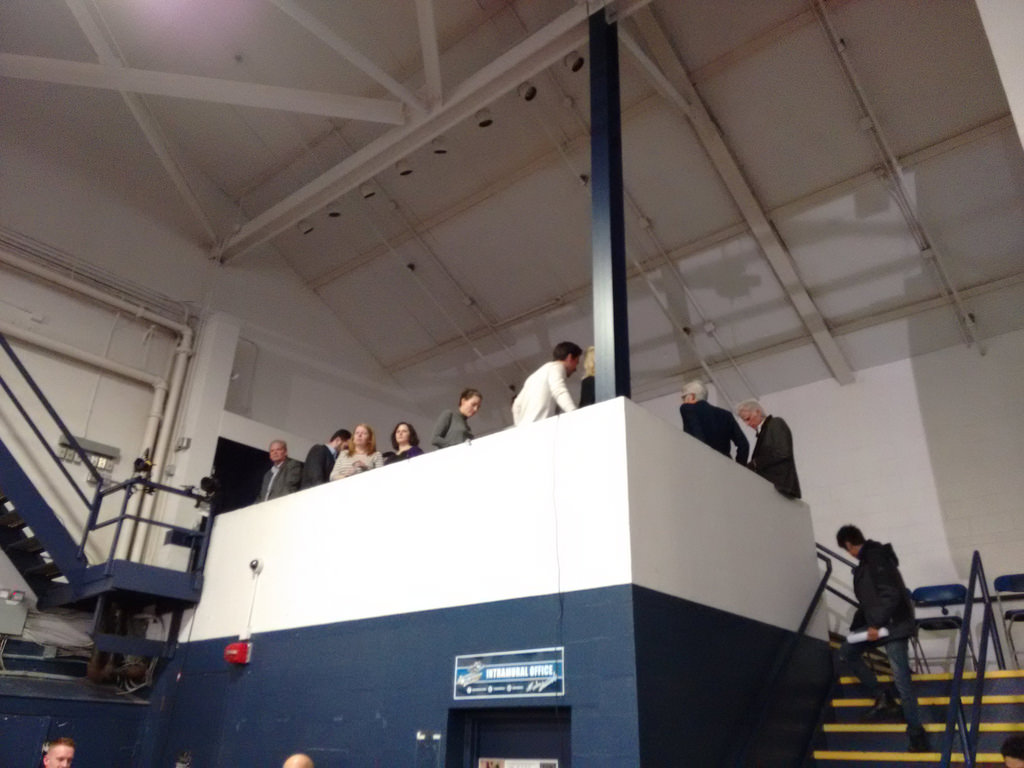 There was, however, no buffet.

As it happened, we timed our arrival perfectly, as about 20 minutes later Hillary Clinton, along with President Clinton and Chelsea, made their way to the podium, where Hillary delivery a spirited speech, part concession to Bernie Sanders and part “on to South Carolina and victory we go!”

The contrast between Bush and Clinton rallies was remarkable, given that they are running for the same position, are both running well-funded campaigns, and were holding rallies only a few miles from each other.

As I write this near midnight, Clinton’s result is 2nd place, with 38% of the Democratic vote and 79,005 votes in total.

By contrast, Bush is in 4th place, with 11% of the Republican vote and 25,859 votes in total, or roughly 1/3 of what Clinton received (albeit in a separate but parallel contest).

Neither may actually have The Big Mo, but Clinton was certainly better at acting like she does.

We timed our exit from the Clinton rally almost as perfectly, darting out before the big crowds. We were on the road a few minutes later, and back to newly-calm Peterborough, NH an hour later. Come morning, life here will return to normal.

Election day is 270 days away.