As anyone who’s driven or cycled in Charlottetown knows, we are blessed with north-south thoroughfares and have a scarcity of east-west ones.

This scarcity is even more apparent for cyclists wishing to use the Confederation Trail as the spine of the city: once you leave Belvedere Avenue heading north, alongside the University of PEI, there’s no clear route east or west until the Charlottetown Mall, making it more difficult to cycle to places on North River Road or onward to Lewis Point Park.

This is doubly-frustrating because there are already low-traffic roads or trails that go west into Lewis Point Park from the intersection of Enman Crescent and University Avenue: but there’s a kind of Darién Gap that separates the Confederation Trail from this, however, as illustrated by the red line on this map: 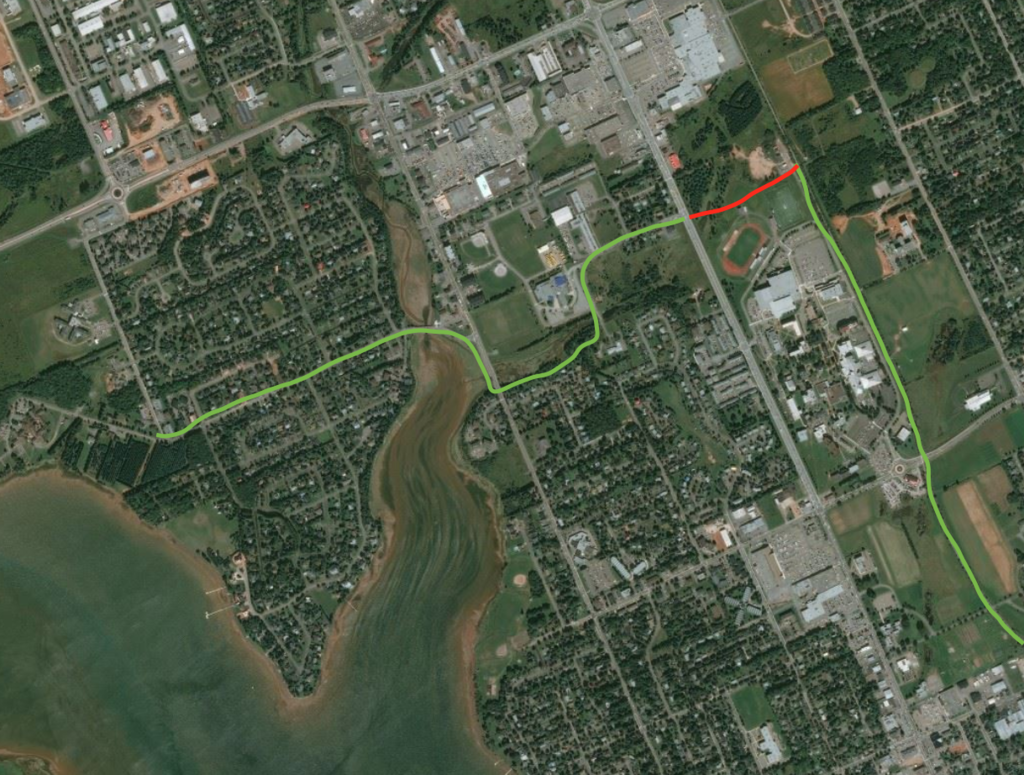 There are signs that this gap might be closed as the University of PEI carries out its master plan: the plan mentions the Confederation Trail and cycling in many different places (emphasis mine):

Confederation Trail is a cycling/pedestrian trail created from a converted rail line that runs the entire length of the Island dipping down to Charlottetown. Naturalized with stands of birch, poplar, spruce and tamarack, the trail forms the eastern edge of the campus and connects the University with downtown Charlottetown. Historically, trains stopped beside the campus and provided transit for students from across the Island. Today, the trail is used by cyclists, joggers, hikers and dog walkers.

Access to the trail should be improved to promote it as a direct, non-motorized route from the University to downtown, a route to the Charlottetown Mall or as a recreation corridor. Culverts that run parallel to the trail on either side collect water and foster naturalized vegetation buffers, but these culverts should be bridged at key locations to facilitate pedestrian access. Bicycle racks, shade pavilions and campus signage should be located at key points of entry into the University from the trail.

Walking and Cycling — the Campus Plan acknowledges the importance of pedestrian and cycling routes to the campus. Improvements include wider and safer sidewalks on University Avenue, clear connections from Confederation Trail to the Campus, more signalized crossings as well as designated bicycle routes and amenities on campus (e.g. sheltered and secure bike storage and access to showers).

Overall, the recommendations for pedestrian and bicycle circulation routes are:

The “short range plan” for the campus includes a connector between the Confederation Trail and University Avenue through the area currently used as a maintenance yard and through to the pedestrian signals at the corner of University and Enman:

I set out this morning to see how far along this connector is, and I was pleasantly surprised by what I found: I was able to ride my bicycle on an almost-trail-like surface from the Confederation Trail clear through to University Avenue. The way was muddy in places, but the trees had been cleared, and the hills were gentle:

Once I rode to the edge of the UPEI maintenance yard there was what looked to be a relatively recently-cleared area that, while it’s a little soggy in the middle, was eminently navigable on a bicycle: 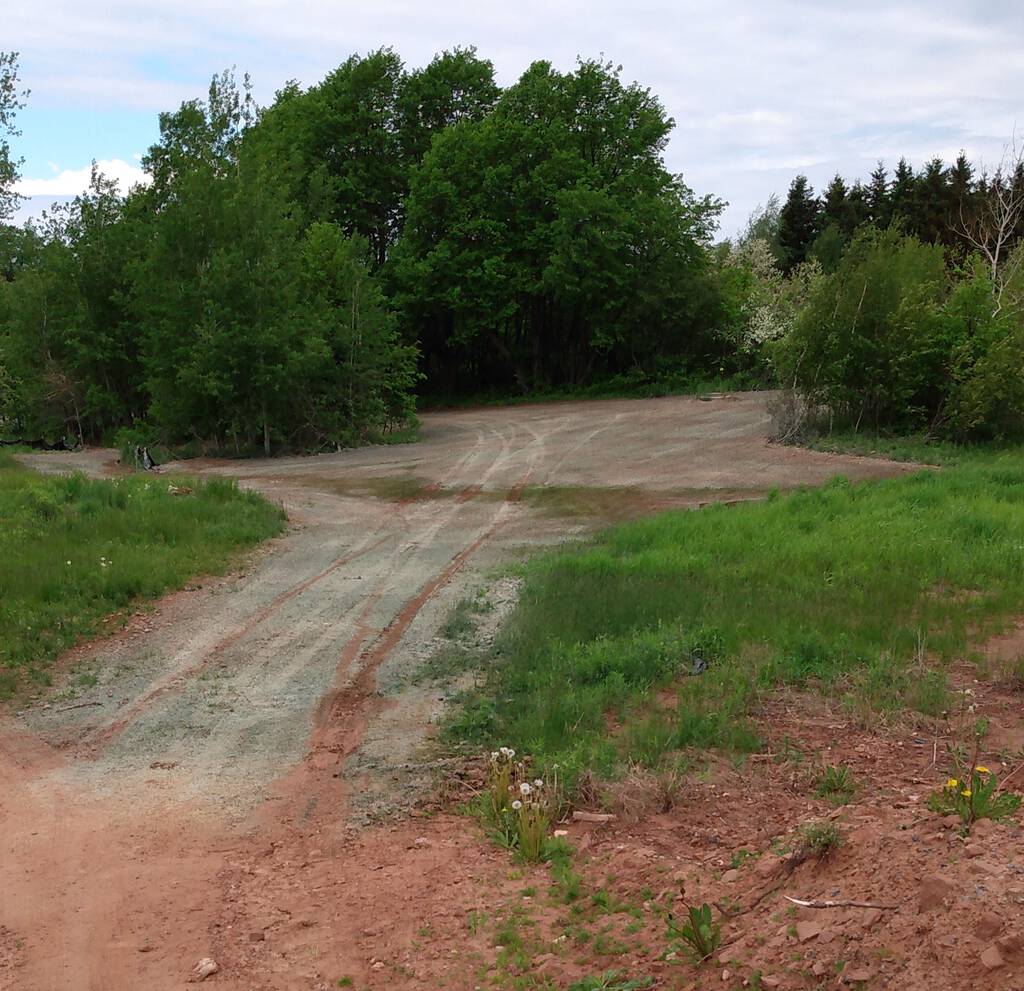 On the other side of this dip the clearing continues, and you can see clear on through to University Avenue: 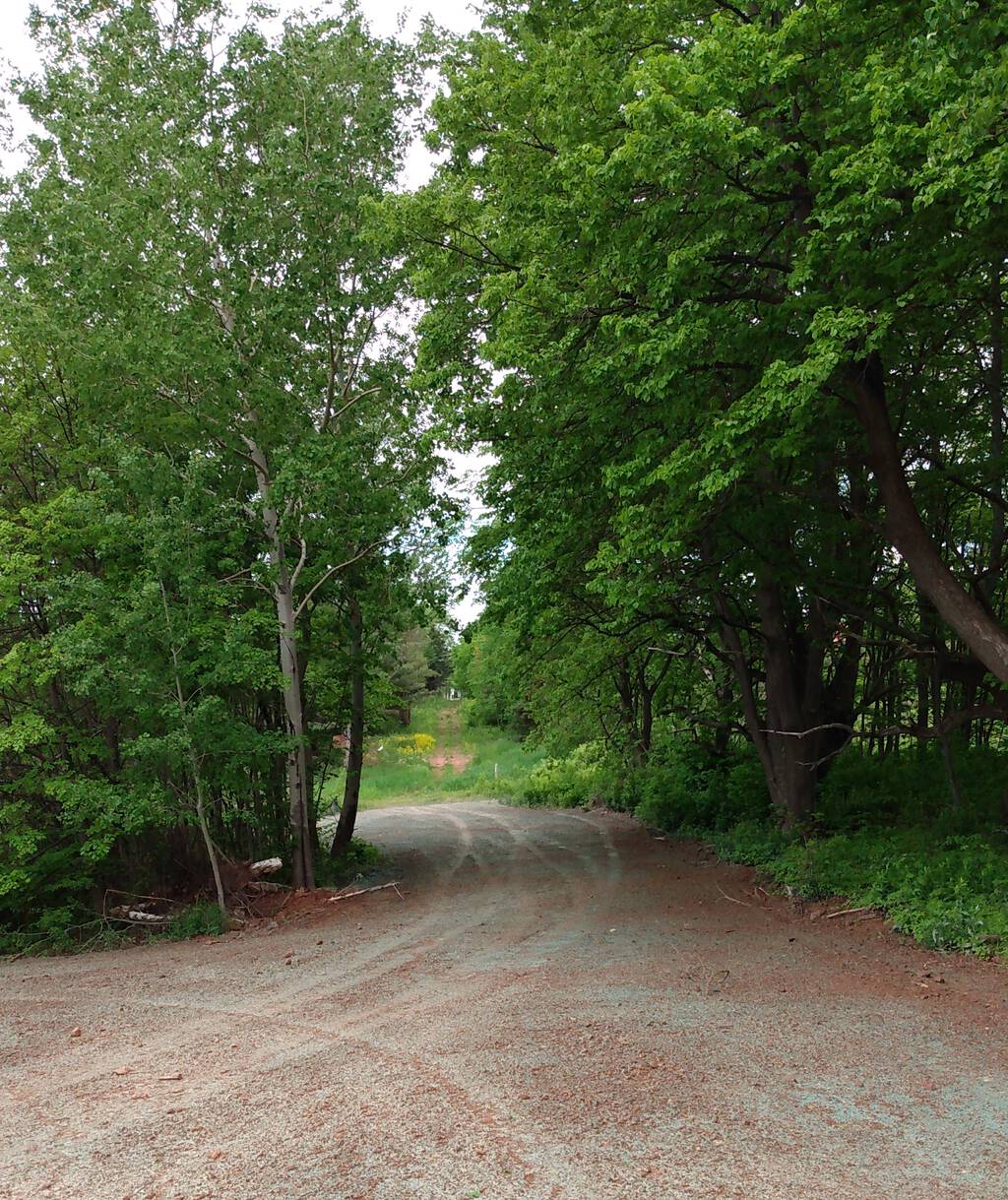 The track from the edge of the fully-cleared area up to University Avenue is a two-track almost-fully-trail-like path: 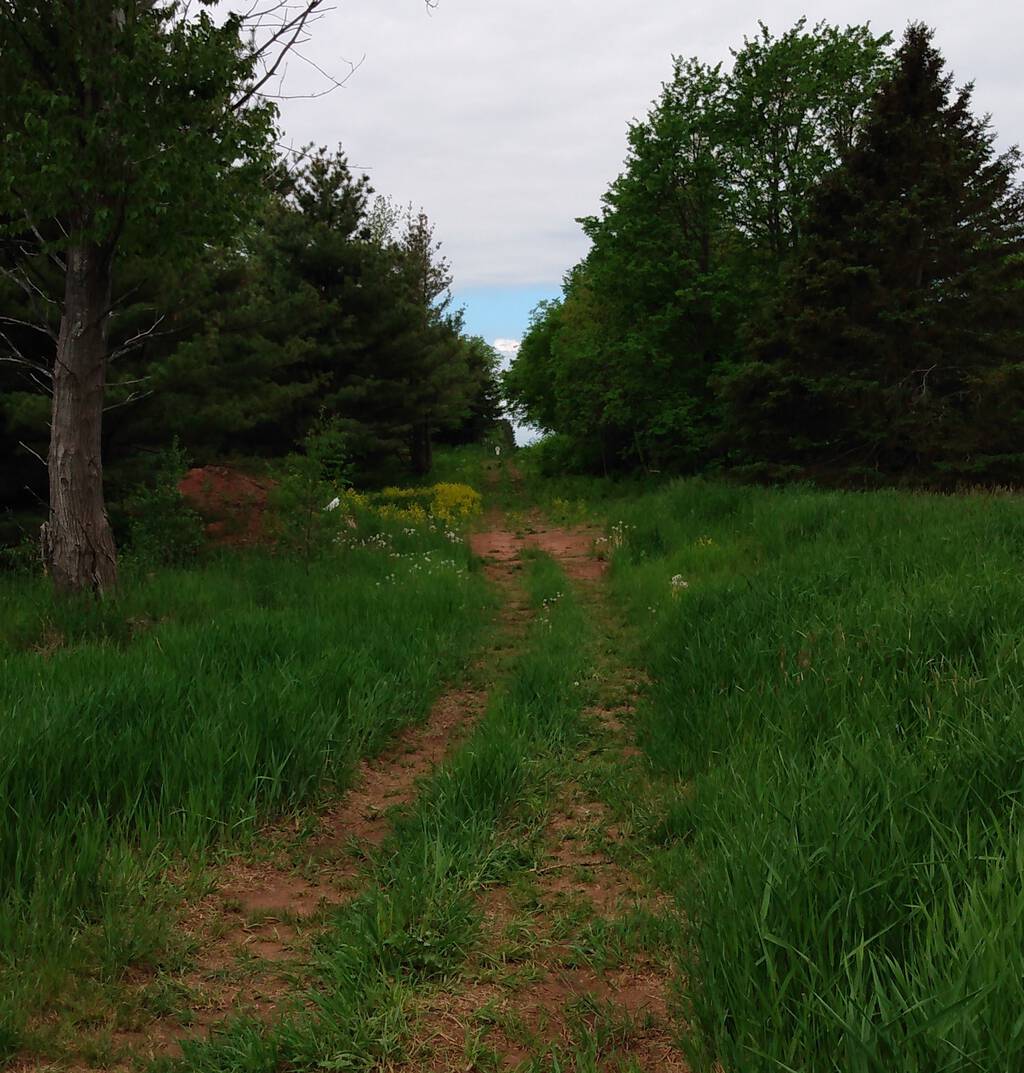 I emerged from this near the pedestrian signals crossing University over to Enman Crescent, and I could then continue along Enman, along Raiders Road to the Hermitage Creek Trail, which wends through the woods to North River Road: 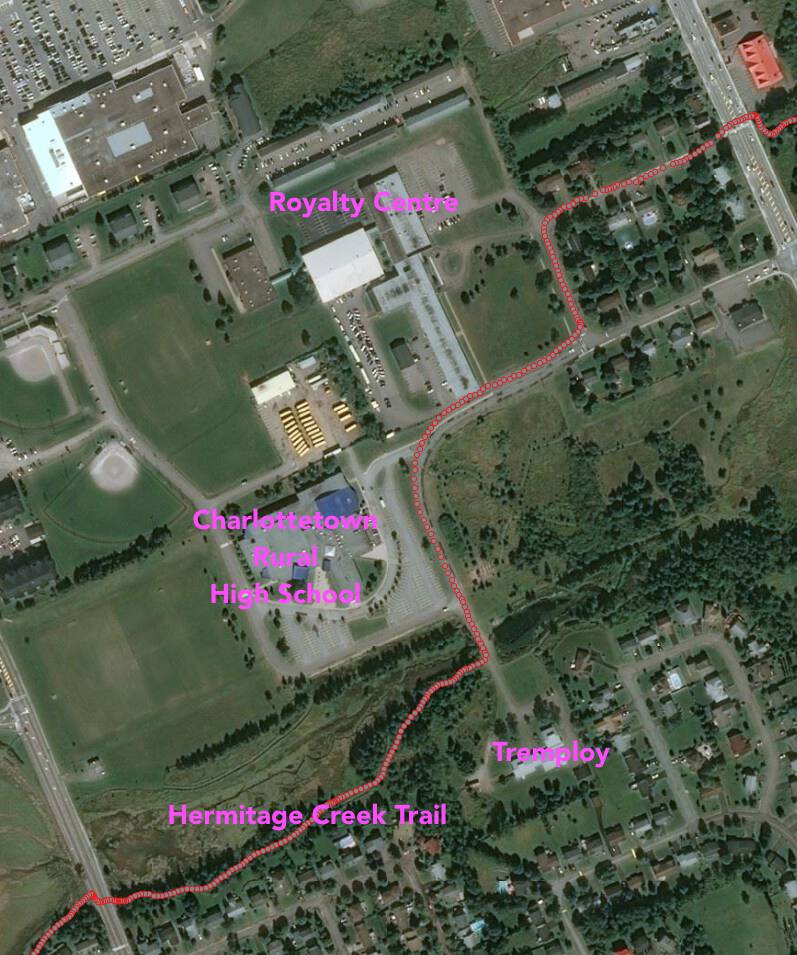 Once I reached North River Road, I was almost able to take trails or quiet streets clear on back downtown: there’s a nice riverside trail that continues on the other side of North River Road that, unfortunately, abruptly ends in an apartment complex parking lot, requiring a loop back up to North River Road. A little way down North River Road it looks like the trail picks up, but the way isn’t clear, and is blocked by felled trees; I could make my way to the cul-de-sac at the end of Madison Avenue by smashing through: 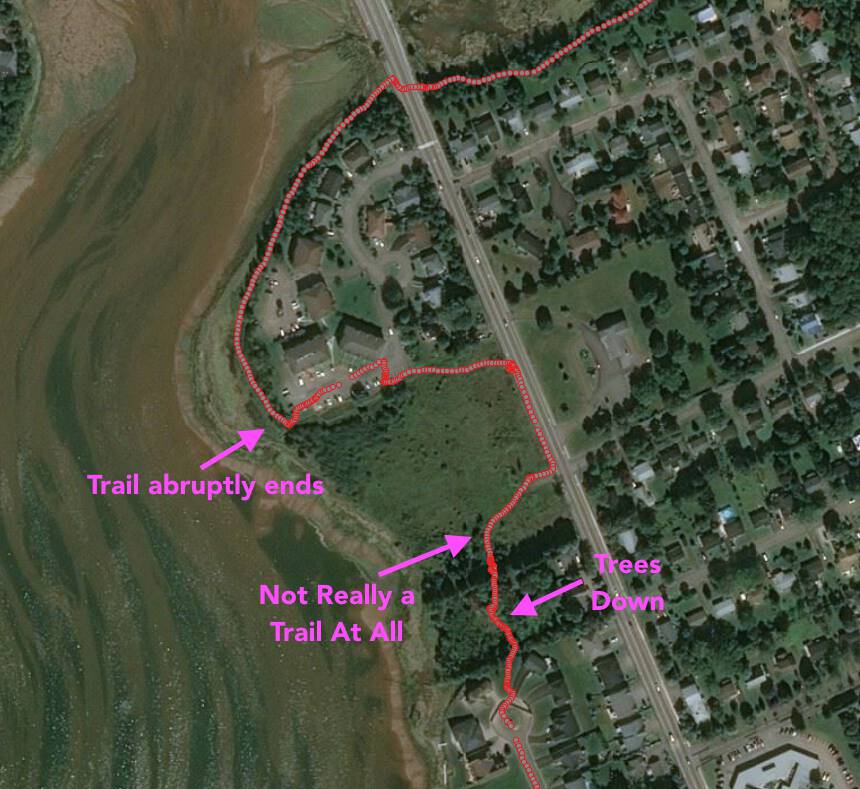 Once I reached Madison Avenue, I was able to cycle on back streets all the way to Victoria Park where I took the Victoria Park cycleway to Beaconsfield, and then continued downtown, a total journey of almost 10 km: 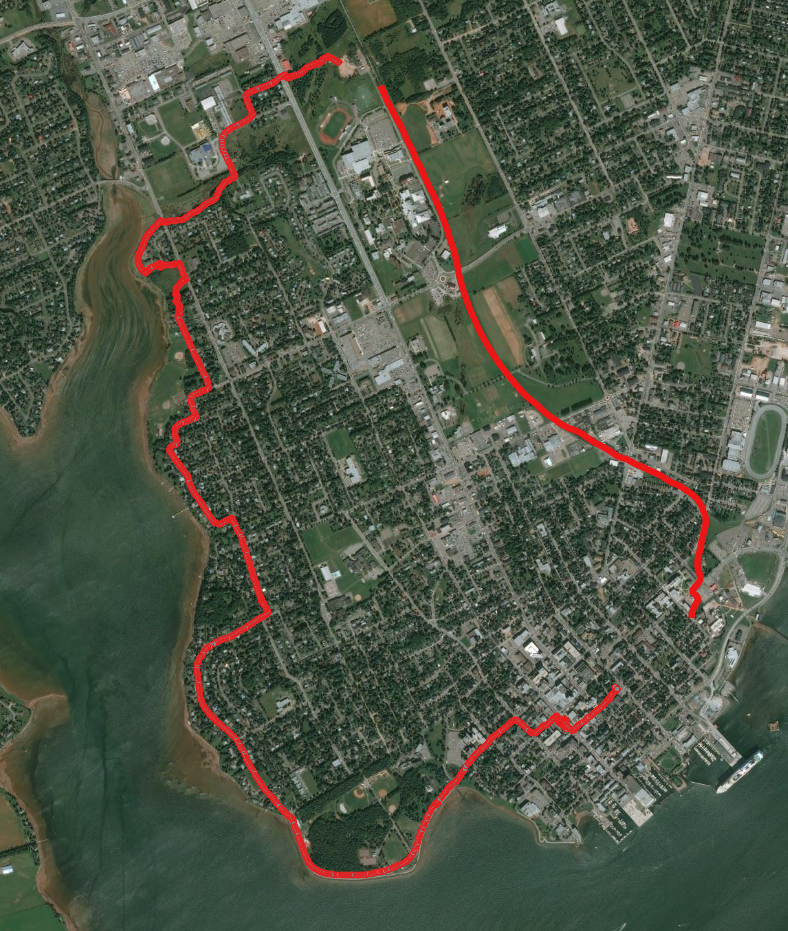 It’s encouraging to see the building blocks are in place for joining some established and well-maintained cycle routes together; if we’re going to be zero-carbon sooner than later, we’re going to conquer these gaps in the active transportation network, and now is the time to start the work.