After my brief test drive of a Kia Soul Electric on Tuesday, I wanted to give Catherine and Oliver a chance to experience the car and see how it worked for them as passengers.

I asked personable owner of Pure EV Mike Kenny whether I might borrow the Soul for an afternoon and his reply was “you know there’s such a thing as overnight test drives, right?”

I did not. But I immediately signed up for one.

Mike met me at the Charlottetown Mall bus shelter yesterday afternoon, ran me back to the dealership on Sherwood Road, and then handed over the keys to his Soul for 24 hours.

I drove home to fetch Catherine and Oliver, and we headed off on a field trip to the north shore–Mike’s suggestion, as there’s a free Park Canada-operated level 2 EV charger at Dalvay.

And we found it exactly as described: 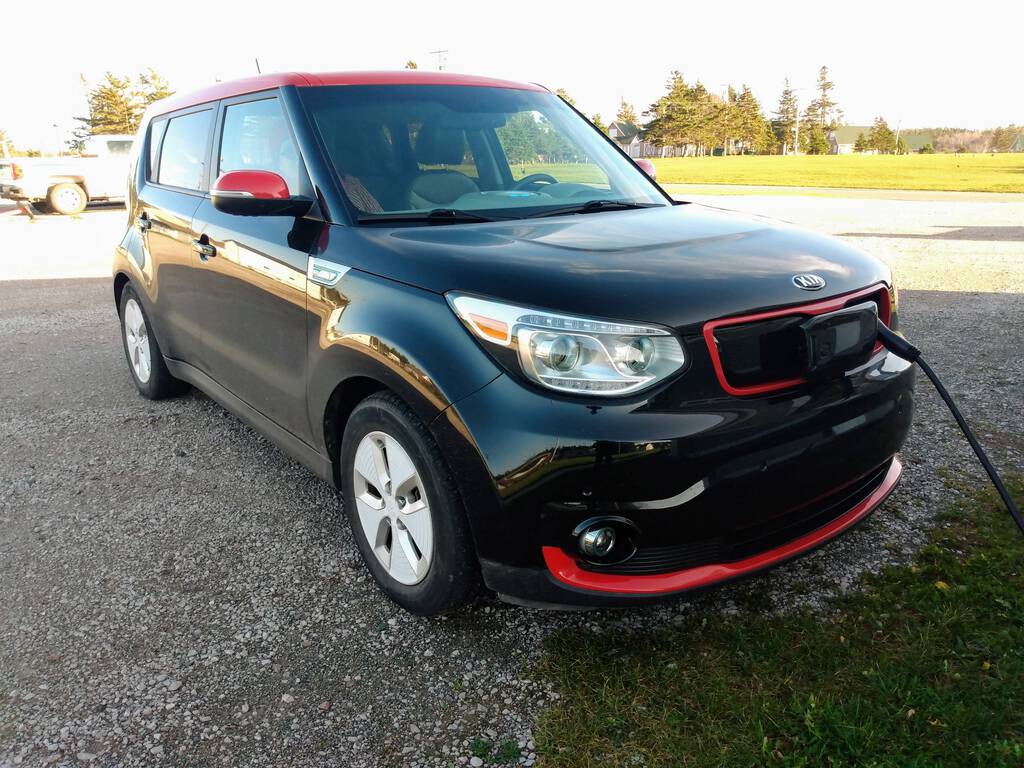 Technically we didn’t need to charge at this point, but we wanted the full experience, so we topped ourselves up to 75% and got a chance to figure out how the charger works (in this case I found an odd grey sphere attached to the end of the plug that needed to be removed and set aside during the charge).

Once the car was sated, we continued along the Gulf Shore Parkway, experiencing the full force of the very high winds the Island was struck with yesterday, and seeing firsthand what an amazing job marram grass does at keeping the dunes from blowing away.

On the way back down the Brackley Point Road into town we decided to go out to supper at a place where we could charge the car.

We initially headed to Canadian Tire, thinking the new DC charger there might be in operation, but we found only wires sticking out of the ground waiting to be attached to a charger.

In the end, we found our way to the basement of the Delta Prince Edward, where there are two Tesla destination chargers and a single level 2 Sun Country Highway one.

We plugged ourselves in, had a nice supper upstairs at the Water’s Edge, and, when we returned an hour later, found our charge level had increased from 35% to 55% (meaning we all lost our Price is Right-style guess as to what it would be: I guessed 74%, Catherine guessed 83%, and Oliver guessed 90%).

We finished the evening’s test drive by driving home and plugging the Soul into our regular outside outlet for the night; when I put the car to bed, its display told me it would be fully charged 11 hours and 10 minutes later. 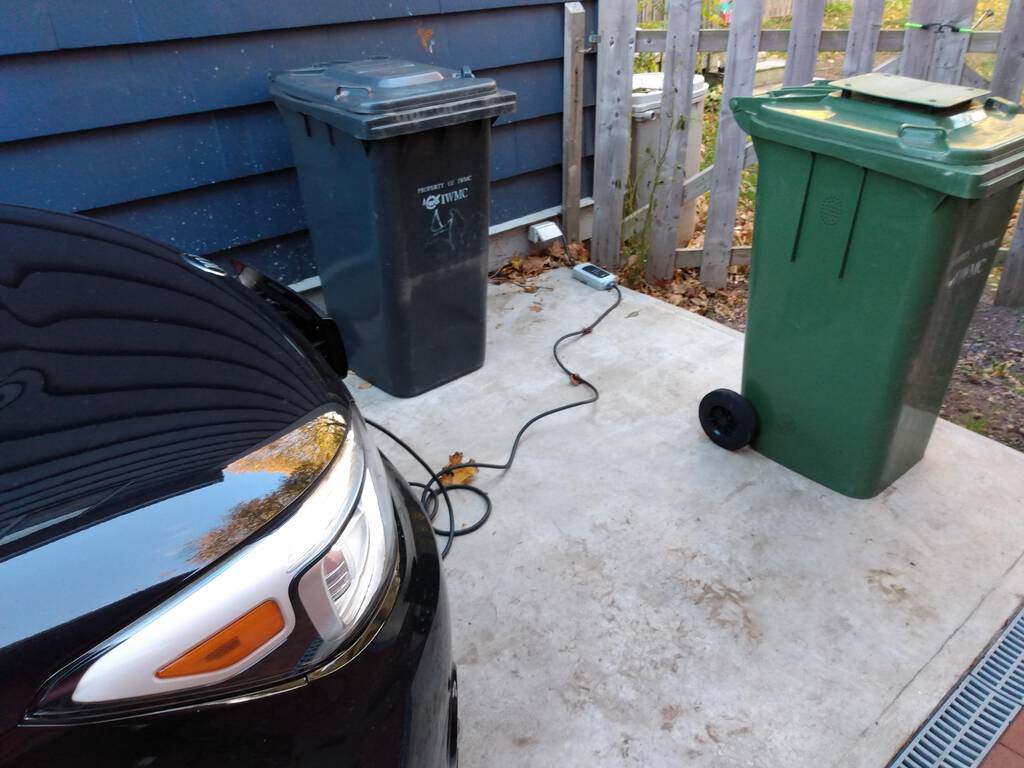 Because we’re monitoring our minute-by-minute electricity usage at home, we’re in a unique position to be able to visualize the charging: here’s a chart showing our electricity consumption last night. The consumption goes up at 8:00 p.m. when I plugged the car in, and dips back down at about 7:15 a.m. Which is pretty close to the estimated 11 hours and 10 minutes the car came up with as an estimate when I started the charge. 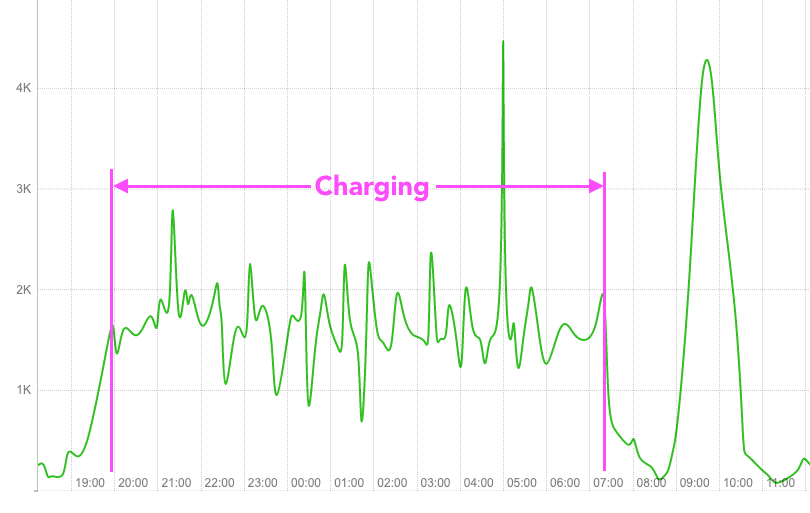 The following uptick in consumption after 9:00 a.m. is due to me placing the wet clothes from the washer into the dryer, which gives you some sense as to the relative draw of the car vs. the dryer.

This morning, when I came out to the car to see how things had gone, I found it 100% charged and reporting a 155 km range: 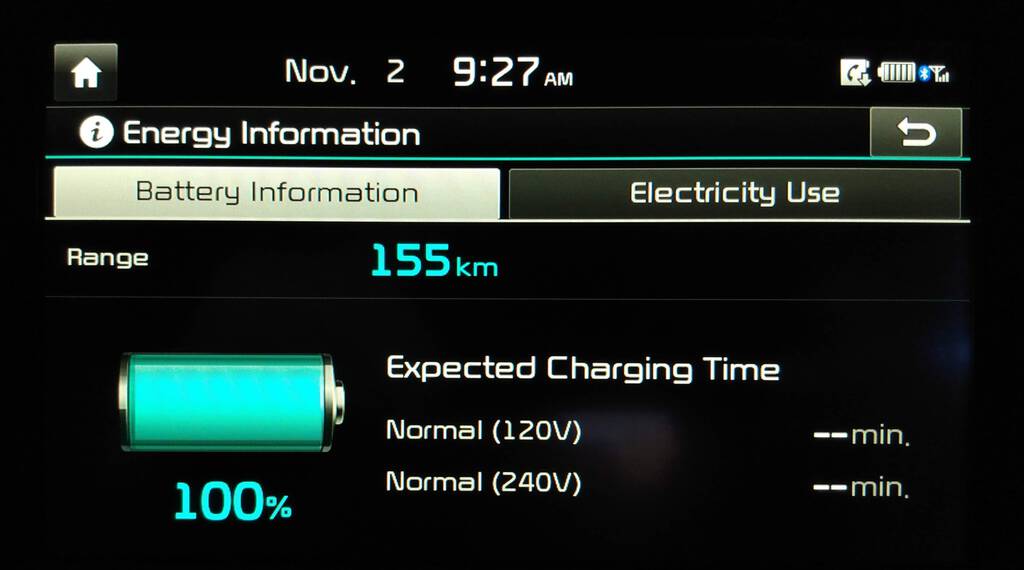 The navigation system in the Soul showed this visualization of the range: 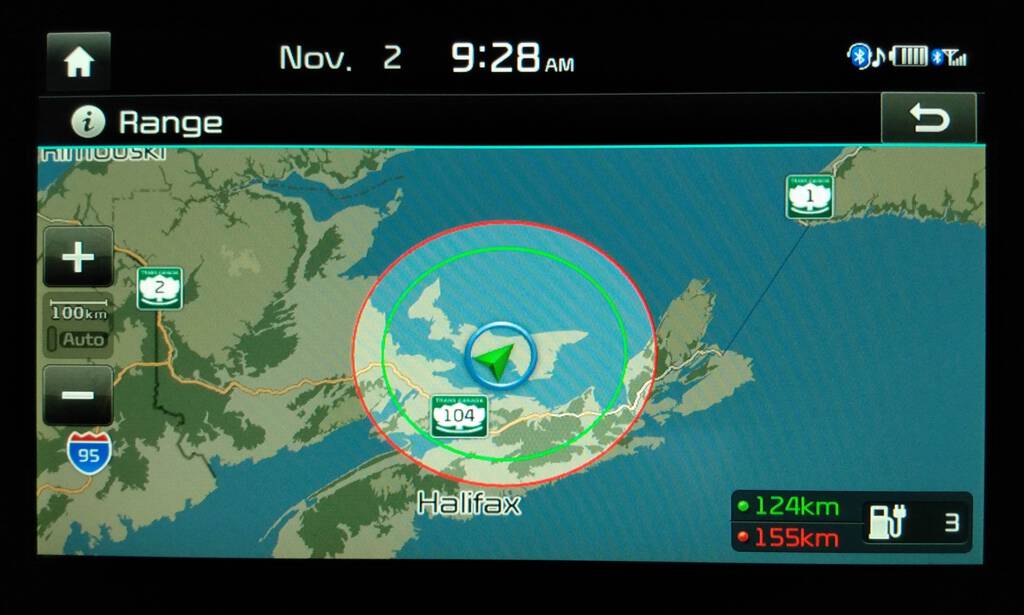 It’s 141 km from my house to Shediac, NB (where there’s a phalanx of chargers), so into risky territory. But it’s only an almost-too-convenient-to-be-true 122 km to the chargers at the Big Stop in Aulac.

Imagining a trip by Kia Soul EV from our house to Halifax, then, seems like it would be possible:

Weather would have an effect here–it was mild yesterday, and so our range would be much better than in the dark, cold, dead of winter.

I dropped the Soul back to Mike at Pure EV this afternoon after lunch and found a kind of EV jam session happening, with a large crew from Iris making various test drives and purchases. Once the decks were cleared, Mike kindly dropped me back home in a Tesla Model S (which is also for sale, if you’re feeling ambitious).

Cute car, looks to be in great shape!

Hello Peter,
What was your impression of the maneuverability and peppiness of the Soul?

I have no complaints in this regard: it drove like, well, a car. All the pick-up i would ever need, good steering (especially tight if you switch to “sport” mode). There are no compromises that I could determine over driving an ICE Soul.

Shortly after the Kia Soul (gas version) came out, I took one out for a short test drive. I was surprised at how much space it has inside - much larger than what it had appeared to be from the outside. I was interested to learn that EV charging was not restricted to public chargers.

Do you have, or know about anyone who has done, cost benefit analyses regarding EVs for Canadians? For the average person on PEI, what kind of mileage would they need to drive in a year in order for an EV to be less expensive to operate than their existing car? I've heard that taxi companies found it is cheaper to go electric, but not average people. Or how expensive does gas need to be for it to be better to go electric? With the right database, a person could enter their weekly driving amounts, current vehicle, current cost of gas, current cost of electricity, EV they are considering, and get a rough estimate how an EV would compare.