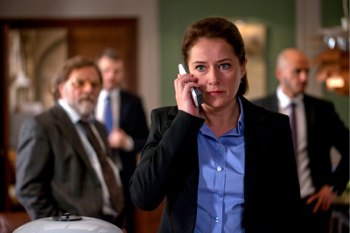 My friend Ann turned me on to the Danish television series Borgen, a political drama centred around the election and government of Denmark’s (fictional) first female Prime Minister.

Borgen isn’t an easy series to track down: KCET in the U.S. streams some episodes, but it’s neither on Netflix nor iTunes, so one must make due with what one can.

Borgen has some soap operatic qualities – romances, break-ups, scandals, etc. – but a lot of the substance of the drama focuses on the dual challenges of keeping a multi-party coalition working and keeping a family going while you’ve got a twice-full-time job as Prime Minister. For a Canadian used to a moribund democracy, it’s novel stuff all this “leader of the Labour Party is Minister of Foreign Affairs” kind of government. And it’s heartening to see a democracy where, vestigial old-boyism aside, women have as much a role to play as men.

The highlight of the series is its star, actor Sidse Babett Knudsen, who’s simply brilliant. But there’s a strong supporting cast, a cast that has improved and grown more textured through season 2.

If you can track down Borgen – it’s available on DVD here in Charlottetown at That’s Entertainment, I am told – I recommend it.