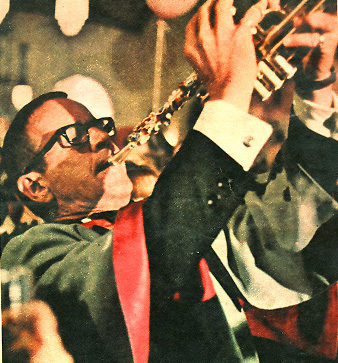 In 1967, a year after I was born, I was living in Ottawa with my parents. My mother was pregnant with Mike. And it was the summer of Expo 67 in Montreal, and Canada’s 100th birthday.

Although I can’t claim any conscious memory of that summer, being in the centre of Canada’s celebrating obviously had an effect on me as whenever I hear Ca-na-da, the Bobby Gimby song (listen via RealAudio) written to commemorate the year, my heart swells up.

Back in 2001, I wrote a post here called Why Founders’ Hall Fails, a review of the then-new tourism attraction on Charlottetown’s waterfront. In the post I said, in part:

Once through the Nunavut world, you emerge into a theatre where you can watch a video presentation that’s one half Molson Canadian commercial and one of Bobby Gimby. And then it’s on to the Canada, Eh! Store, which has an uninteresting collection of the kind of tchotchke that can be purchased around the corner at Tweel’s.

This afternoon I got a call from Bobby Gimby’s daughter Lynn. She’d recently gotten herself wired up to the Internet, and a web search for Bobby’s name led her to my post. She was curious, and wanted to know more. We had a good chat. I had to explain, alas, that I was speaking metaphorically about her father in the video presentation, not literally — as far as I know there is no actual Bobby Gimby content at Founders Hall (although I’ve emailed them for confirmation of this).

I know I shouldn’t get so excited about calls like this, but Bobby Gimby, for whatever reason, holds an exalted place in my life; imagine getting a call from, say, Jack Kerouac’s daughter or Neil Armstrong’s son and you’ll have an idea of what it’s like.

I was just speaking with Mom about the call, and she reminded me that Bobby was also in the The Happy Gang, a seminal Canadian musical group that played on CBC Radio from 1937 to 1959. I knew of The Happy Gang when I was growing up because my parents had listened to it, but also because Gang member Cliff McKay was my best friend Timmy Whibley’s grandfather.

All of this looking backwards got me thinking about Expo 67. I’d always assumed that I’d gone, and was sure that Mom and Dad had pictures. So I phoned them to check, and neither of them had a memory of either going or having pictures. Dad called back 30 minutes later, though, with news from his diary that we had, in fact, gone twice that summer, once on Saturday, June 10 and again on Tuesday, Sept. 19, the second time with my grandparents from Cochrane. At least Dad assumes that I went twice; the first entry makes no mention of me, but he couldn’t imagine what else they’d done with me. The second entry, however, contains the line “little Peter came too.” I haven’t been called “little Peter” for a long time.

I’m so pleased to see this post. I feel the same way, about 1967 indeed, a story I wrote is on my website (which is about Cochran, too, oddly.) I’d love to contact Gimby’s daughter over a mystery I’ve uncovered…

Hello, Nice to know that Bob Gimby has a daughter to pass on his wonderful legacy. The CANADA song was very inspiring to us as children. We sung it often back in the day…the lyrics remain in our hearts and the back of our mind. I still have the original 45. Thanks for the wonderful memories of a special time in our Canadain history. Thanks to you Bobby for your wonderful contributaion to the history of Canada.

I was in a quior and we sung a lot of bobby gimby’s songs wish i had a copy for memories.