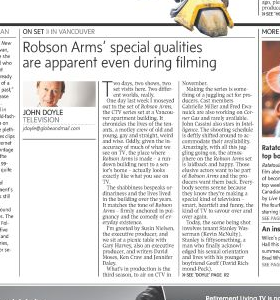 The first time I ever saw Dave Moses was at a performance of Annekenstein back in the early 1990s in the space City Cinema now calls home. I thought the show was brilliant, and one of the highlights for me was a rumination on Island life that included a syncopated delivery of the line “big fish … small pond” to describe a certain kind of Island success.

Since that time Dave and I have become friends, started a business together, and have launched many plots that have gone nowhere but involved much discussion of world changing. And in the last few years Dave has been quietly working away as a writer and story editor on the CTV program Robson Arms.

The best part of being a Robson Arms viewer, for me at least, has been seeing little plot points that I saw the early hatchlings of years ago — “call up all your old girlfriends,” for example — spring to life on TV. It all seems a little like magic.

On Monday the show got some much-needed light shone on it by Globe and Mail television columnist John Doyle. He called the show “smart, heartfelt and funny, the kind of TV to savour over and over again” and in comparing the show to the Global show About a Girl said:

Kudos to Dave; the show’s success is due, at least in part, to his wit and intelligence.

I just came across this for the first time.
It’s brought a tear-ball to my eye.

Thanks so much for the kind words.

Much love to you, the family and the Island at large.