If you have visited the Coles Building, or Province House in Charlottetown, or even just driven down Richmond Street between Queen and Prince, you are sure to have seen the statue of a soldier on a 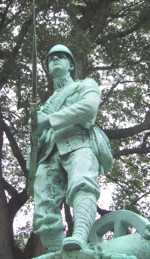 battlefield, bayonet at the ready. The statue is old and green and not in the best of shape. Perhaps you’ve heard it referred to as the “Boer War statue.”


Somehow I missed the Boer War in school: it fell between the cracks between the Family Compact and World War I. Today I found myself, camera in hand, in front of this statue, and after taking a couple of pictures I decided I should find out more.


The Boer War, which began in 1899, was a war between two colonial powers, the Brtish and the Dutch, over control of (and fought in) South Africa. The war was supposed to be a quick affair but, like most wars, it dragged on much longer than the British thought it would, finally ending in 1902.


One of the major battles of the war was the Battle of Paardeberg, fought on February 18, 1900. Among the dead that day were two Prince Edward Islanders, members of the Second Battalion, Royal Canadian Regiment. Their names were Roland Taylor and Alfred Riggs. And their contribution to the war, and their death in it, is memorialized at the base of the Boer War statue.

The head of the Boer contingent at the Battle of Paardeberg was General Piet Cronje. Cronje made a stand in the path of the Canadians, and 60 yards west of this stand, known as Cronje’s laager, is where Riggs, W.A., Pte., R.C.R.I. 2nd (Special Service) Battalion, “G” Co. is buried.


The Boer War statue was constructed in July of 1903, making it 100 years old next year. To quote from Catherine Hennessey’s website:


It is a fine monument, too and it needs cleaning. The sculptor for it is prominent as well. Hamilton McCarthy, a British sculptor who had settled in Canada was one of the two artists for The Alexander MacKenzie monument on Parliament Hill, and he himself did the South African War Monument in Ottawa and that wonderful piece on top of the hill, near the Art Gallery, of Samuel de Champlain.

Although our piece of sculpture was not as grand as we had hoped for it’s pretty nice. On that July day in 1903 when it was unveiled what was lost in stature [so to speak] was made up for by the numbers that attended and “by the order, precision and dignity ” of the event.

Next time you’re walking by, stop for a second and remember.

Breaker Morant (1980) is a great movie set in the Boer War. Check it out sometime. Starring Edward Woodward and directed by Bruce Beresford (who, as a point of reference and, perhaps validation, later directed Driving Miss Daisy).

Last summer I did the same thing you did. For years I walked passed the statue on the way to my friends place on King Street. One day last Summer for some reason I stoped and actually took a long look at it. That night when I got home I did a little googleing to see what I could find out about the war.

FYI: Boer is Dutch for farmer. I am pretty sure the war was not between the Dutch and British governments, but between the South African settlers of those two backgrounds.

Oh, and Paardeberg means ‘Horse mountain’. And Apartheid is a Dutch word too…

Aparthied just means “separateness” or separation in Dutch, I believe. I worked in Holland in 1986 and was a bit surprised to hear the word or words like it all the time. Dutch “heid = English “ness”. All very roughly, of course.

A few comments by a “Boer” Firstly the war was fought between the British Empire and two Boer Republics, the Zuid Afrikaanse Republiek and the Oranje Vrystaat. The Boer were descendants of mostly Dutch, French and German stock. Boer meant “farmer” and was originally meant as a term of insult, but the Afrikaner took the term to heart and took pride in being called Boere. Afrikaners from the Cape Colony (Afrikaners and English) fought on the British side too, mostly later in the war. Afrikaners in the British forces were called “Joiners” and Cape Colony Afrikaners in the Boer forces “Rebels” Thirty-odd rebels were executed, amongst them a proper Dutchman (Veenstra) and two people were executed for “War Crimes” — Breaker Morant (Australian) and Gideon Scheepers (Transvaal).

My son was given a heritage project to do and he was having trouble finding things to do it on. My father mentioned that he thought his Grandfather had something to do with the ‘boar war’ solider in front of Province house. We were very excited to go check this out and although I’d heard this story a few times growing up I never did take the initiative to find out for sure. When we arrived we both ran towards the statue to see if our Great and Great Great Grandfathers’ name was etched somewhere on the monument. Needless to say we were disappointed to see that there was no family name that we recognize anywhere on the statue. We aren’t sure as to how the story was started, as my father is an only child and was orphaned at a young age and much of his extended family has passed away or is too far out of the ‘Dowling’ circle to know for sure. Is there anyway that I would be able to find out where the “Dowling” name may be associated with this statue? Perhaps he was a worker who helped erect it, or something. My father recently faught bowel cancer but is now stricken with Parkinson’s Disease and I could tell he was very dissappointed upon hearing our news. It would be something I’d love to be able to tell him even if the legacy of this statue to our family is less then ‘heritage’ worthy.
Thank you for your time, and any help you can offer