Three years ago on a hot summer day in downtown Boston, in the middle of the Democratic National Convention, I stumbled across Barack Obama on a balcony off the media trailer posing for an unseen photographer. I snapped a photo from far across the parking lot: 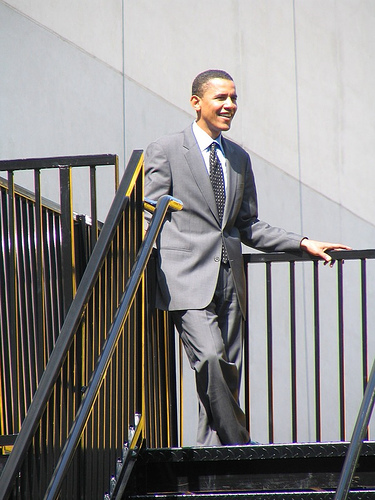 Does this mean he has your blessing and support in his bid?

He’s a smoker. Americans will not elect a smoker.

Americans may in fact elect a smoker because being a smoker is the kind of fatal flaw that serves to burnish Obama’s character. It’s like the antithesis of Stockwell Day on a Jet Ski — a kind of positive negative.

On ‘60 Minutes’ last night Obama claimed to have given up smoking as a pre-condition of securing his wife’s blessing to run for President.

I was just trying to be a bit mischievous with my comment about his dirty habit. I have heard it suggested that the smoking will hurt him (politically, we know it will physically kill him), which is encouraging I suppose. At least people aren’t saying “Americans will never elect a black man”, or “Americans will never elect a man with the middle name ‘Hussein’ ”. Twenty, twenty-five years ago smoking would have been the least of his problems, now it’s a cardinal political sin, apparently.

I’d vote for him. It’s weird how important smoking is and how relatively unimportant things like Abu Ghraib seem to be given the kind of coverage and attention they get. People in North America seem to reserve their moral outrage for personal flaws and aren’t necessarily as willing to condemn a man for bombing the shit out of a country. Killing babies etc. just doesn’t seem to compute.

The orgasm at home and napalm abroad.

It is interesting what the media perceives as negatives for a politician. I was thinking today about George W’s defining moments as portraying America as a victim post 9/11. It would be nice to see a more confident America that doesn’t feel it has to act like a bully to be a world leader. America needs Obama (or even Hillary Clinton) who seems to personify this type of SELF-confidence.

Apparently, Pete, you know how to pick ‘em.

I actually called it a year earlier — see http://ruk.ca/article/3167