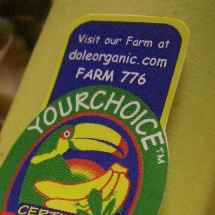 As I mentioned here, Rob and I once had a project, called “This Bag of Potatoes Has a Website,” that would have seen farmers in the Kinkora area provide a code of every bag of potatoes leaving their warehouse and bound for consumers. Customers could enter the code into a web application and find the “provenance” of the potatoes — why grew them, what fertilizers they used (and when), how many miles they’d traveled to market and so on.

The Kinkora project never happened, but now Dole is doing much the same thing for bananas. Soon, I think, consumers are going to demand this sort of information in the same way we now expect nutritional labeling on packaged food.

That is a really interesting idea. It reminds me of another idea I saw on TV with a device that is the exact size and weight of an egg that travelled through processing — recording the bumps along the way so they could find exactly where to improve handling of the eggs.

Also I have an idea about monitoring river water temperature, clarity, etc. live. Streams of data from streams. Parameters could be set for alerts when river water changes, and inspectors could stop damage as it happens. For example a backhoe mucks up a stream, the cloudiness is reported from the sensor to a system which alerts wildlife officers to investigate.

There are better ideas out there too, some of which could be developed to reinvent agriculture.

How about an audio file of the sound of the cow your steak was butchered from attached to the plastic wrapped foampack. Mooooooo!

Or your lobsters GPS location where he was pulled out of the trap, we may find the taste varies from say Fundy to Northumberland so regional lobster varieties would appear similiar to wine regions. I might avoid the lobsters caught near, say the Irving Whale wreck.

The organic eggs at the superstore have per package tracking much like this as well, and have for a while. I have to agree, I think this will become more and more common on everything we buy at the grocery store.

Anyway, when you point out the obvious about the future you instill fear into the very same people who ought to smile with delight when the future **their future** is pointed out before they have to pay taxes in it.

If I was a farmer I’d be jumping at this idea to make sure I got it right and I’d invite you to dinner to thank you for bridging the gap my busy life has burned into my ability to understand.