Here’s an undated postcard from the PEI Museum and Heritage collection showing the Confederation Centre of the Arts: 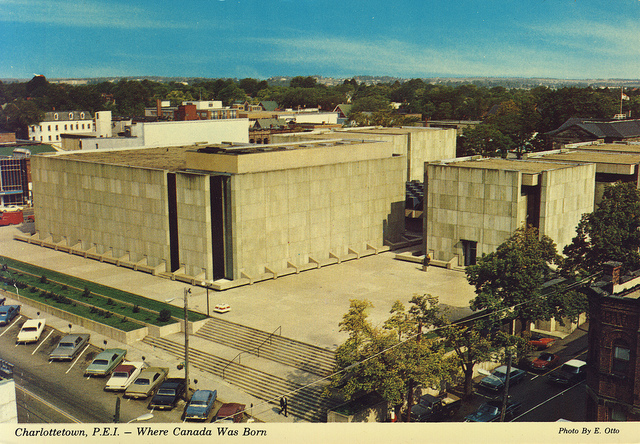 The Centre is in the Brutalist style that was typical of institutional buildings in the 1960s, a style described as valuing “truth to materials”:

This “truth to materials” approach was anti-aesthetic, but, the Smithsons believed, more honest and true to Modernism’s basic principles. Reynar Banham dubbed the school ‘the New Brutalism’, a movement which aimed, in his words, to “make the whole conception of the building plain and comprehensible. No mystery, no romanticism, no obscurities about function and circulation.”

The buildings that were torn down to make way for the Centre were decidedly non-Brutalist; here’s another postcard from the PEI Museum and Archives collection taken from the same perspective, but in an earlier day: 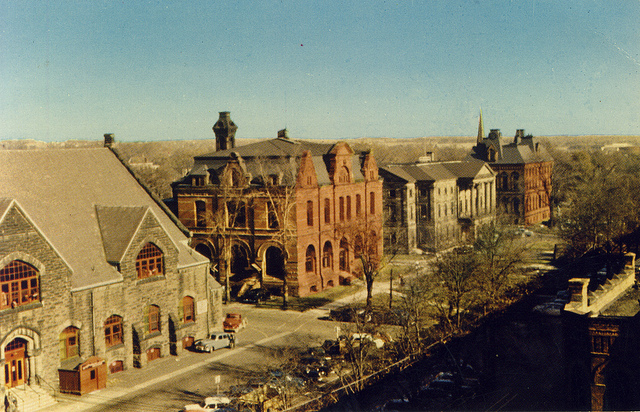 Full of mystery, romanticism, and with much left to the imagination about function and circulation. Tearing down those beautiful buildings and replacing them with something tantamount to a nuclear fallout shelter took courage; it may have been misplaced, deranged courage, but it was courageous nonetheless.

Almost everything that has been done since — as the building has, as Stewart Brand would say, “learned” — has been backing away from that courage, trying to mute and soften the Brutalism. Here’s a photo I took from my office this morning, from a slightly different angle, but capturing the same area of the Centre: 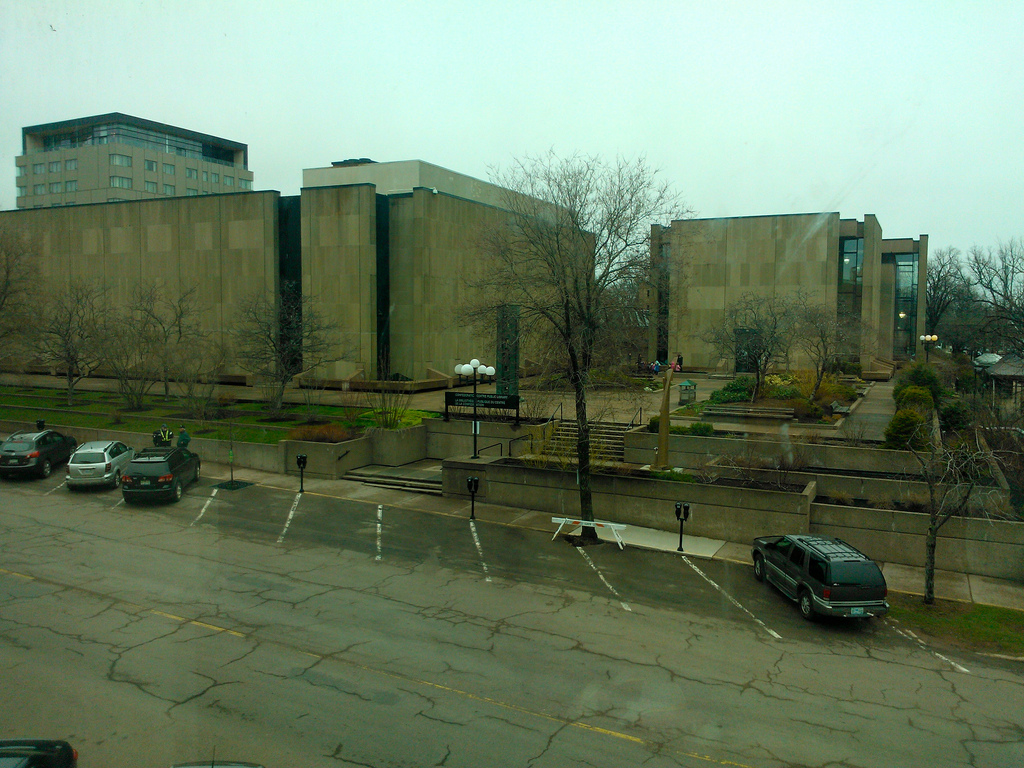 The trees could be expected to grow up. But everything else — the planters, the replacement of the broad staircase, the public art, the lamp-posts, the garbage cans — has had the effect of obscuring architectural intent of the building. It hasn’t exactly added “mystery” or “romance,” but the eye is deflected, and the truth is no longer in the materials.

In ‘Why I hate Canadians,’ Will Ferguson includes this comment on The Confed Centre in his reminiscences on Charlottetown: “One of the great unprosecuted crimes of urban planning.” In fairness, the lovely Harris market, nearest Queen, burned in ‘58, so the perpetrators of the Confed Centre can’t be blamed for that loss, but the very pretty Cabot Building (post office) next door was, indeed, bulldozed in the name of boldness, as was the rather nice Harris Memorial Library, which stood at the corner of Queen and Grafton …

Anyway, thanks for another interesting post, and props to the PEI Museum & Heritage Foundation for following your lead in putting the UPEI Library Collaboratory equipment to such good use.

The windows from the Cabot Building were re-used in an octagonal museum in Cabot Park in Malpeque. There is a picture of this building in the post card collection (but I can’t get to Flickr from work!). I remember going to the museum as a kid, and seeing the pelt of the “last bear shot on PEI”. The museum has since vanished. Does anybody have any idea what became of the windows?

Just looking at your picture of of the Confed centre library instantly brings back my many childhood and adolescent visits. It was where I first found good books, researched many papers, pored over the hockey news, studied for many exams…a wonderful indoor public space. It still is. Not so Brutal.

I see the drivers couldn’t park in the original post card either.