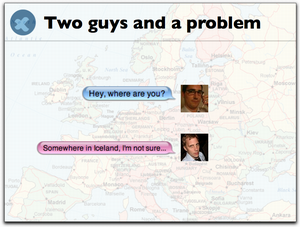 I got in my Jetta to drive to Sackville on Tuesday afternoon. And the heater wouldn’t work. I poked and prodded and looked under “heater stops working” in the manual. But all to no avail.

Oddly, the only other time this has happened to my Jetta, five years ago, I was also heading off to New Brunswick. Which makes me think my car shares some of my misgivings about our province to the west.

As then, however, a little bit of time to warm up, along with a jiggle to the fuse, got me defrosted and on my way.

Although I once thought nothing of driving long distances, in recent years I’ve settled down comfortably into a 3-block-radius routine punctuated by large gallomphs to other continents. So driving to Sackville felt a lot like driving to Osaka. As it turned out, however, the weather was fine, that afternoon’s episode of Q was interesting, and I made it there in 90 minutes without additional incident.

At the appointed hour I met up with Shauna at the Bridge Street Café and she guided me over to Hart Hall at nearby Mount Allison University where I could set up for my rumination on psychogeography for her protracted symposium.

Universities have changed a lot in the 23 years since I was a student in one. Although it makes me feel like Andy Rooney to say so, in my day there were no laptop computers, and if you wanted to check your email you booked a workstation in the computer lab. Now everyone has a laptop, and they are the papyrus of modern academia (you see what feats of metaphor being on a campus forces me into?).

Shauna’s geonauts listened patiently as I rambled on about the history of the Plazes idea and what it’s become (here’s a PDF of my slides, albeit without the exciting audio inserts of Felix and Stefan). There was a good collection of questions when I was done (interestingly the “aren’t you concerned about your privacy” question didn’t come up at all) and by 8:00 p.m. I was back in my Jetta and on my way back across to PEI.