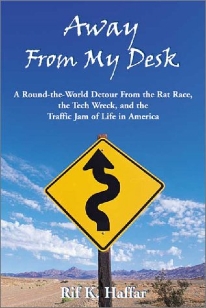 Away From My Desk, subtitled “A Round-the-World Detour from the Rat Race, the Tech Wreck, and the Traffic Jam of Life in America,” is a book by Rif Haffar about a motorcycle trip around the world with has girlfriend Tracy.


This is the first round-the-world travelogue I’ve read written by someone with money. I’m used to reading about the adventures of travelers who stay in $5 hotels and spend their days welding together the frame of their broken jeep. I’m used to characters who travel close to the ground, get themselves into trouble, and have a true sense of adventure.


Haffar is none of these things: his travel plan in a new city consists mainly of finding the most expensive hotel that provides the greatest isolation from the teaming hordes of the native population. This isn’t universally true — especially while they’re still traveling by motorcycle, the pair does live slightly more “rough and ready.” But the last half of the book is full of Intercontinentals and Sheratons.


I say “still traveling by motorcycle” because this really isn’t an “around the world by motorcycle” book — the motorcycle was tied up at Indian customs, and the rest of the trip — through Asia, Australia and South America — was conducted by plane, sea, and rented cars, trucks and motorcycles.

Haffar tries to be a witty and entertaining writer. But his primary attempt at humour — wildly exagerating numbers, like “and 1,000,000 mosquitoes” — is quickly tiring, and the balance of the humour rests mostly on making fun of, or pointing out the peccadillos of the locals.


Whereas in First Overland, we learn a lot about the interplay of the expedition team, and Who Needs a Road? is filled with the protagonists getting thrown into prison and hoodwinking themselves through customs, Away From My Desk is really just a mundane travelogue, relating neither a thrilling adventure nor a compelling travel relationship.


If you’re a serious student of round-the-world travel you’ll still get something out of the book. Just don’t expect too much.


I bought Away From My Desk at the The Toadstool Bookshop in Peterborough, NH in the spring of 2004.


Book Information: Haffar, Rif K. (2002), Away From My Desk: A Round-the-World Detour from the Rat Race, the Tech Wreck, and the Traffic Jam of Life in America, Ameera Publishing, Seattle.