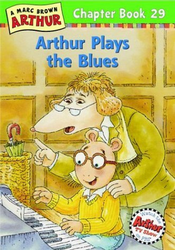 Oliver has an Arthur doll. He talks. When you squeeze his belly.

One day last week I heard Arthur talking to himself upstairs in Oliver’s room while we were all eating dinner. Catherine suggested that something had fallen on Arthur’s belly, thus forcing him into endless dialogue.

I sarcastically commented something along the lines of “well, I guess we’ll have to put up with this until Arthur’s batteries run down and Arthur dies.”

Oliver, who is only 5 and, I thought, had only the vaguest sense of “life” and “death,” immediately broke down in tears of grief. It took several hours to get the episode out of his system. I think he is still suspicious that Arthur has some chronic disease that we’re not telling him about.

Let this be a lesson to me.

Lessons to be learnt from modern mobster films, where everyone talks in dark innuendo. Dark innuendo might work better than outright morbidity in front of the kids.