Apache. Running on my iPod. http://ipod.ruk.ca/ (taking the iPod home, so offline for now!). Freaky. And, of necessity, short-lived, so get it while you can. 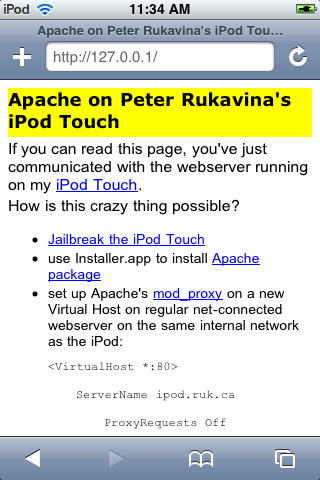 Update later: Well, 62 of you visited the iPod server test page. Thanks. A couple of things I’d like to explore more:

Hi,
I have an ipod touch (2.1) and I have jailbroken it.
I want to install apache and php on it, but i cant find the packages in the installer (I have installer 4 beta version).

Can you please tell me which repo you got the packages from, so that i can check if i have them. I have added many repos listed on the net but havent been able to find apache/php in any of them.

Any help would be highly appreciated.