As you will know if you follow me on Twitter, from a series of alternately mournful and celebratory tweets of late, the musical Anne & Gilbert is running in The Guild this summer. And by “in The Guild” I mean “in the theatre that is 6 inches on the other side of the wall directly in front of where I sit and work every day.”

We learned that Anne & Gilbert would be moving in back when there was still snow on the ground, so we’ve had a lot of time to dwell on the implications of sharing a tiny space with effervescent singers and dancers professing Anne’s love for Gilbert daily. All we really had to go on when pondering what it would be like was our experiences last spring when the Holland College Performing Arts showcase was held in the theatre and we were subjected to entertained by endless iterations of Queen songs rehearsed by a impossibly keen bunch of triple threats.

So, let’s just say there was some dread.

All the more so because, despite numerous career turns that have seen me employed in the “Anne” industry (promoter of Anne on www.gov.pe.ca, drafter of business plan for Avonlea Village, procurer of Anne-themed preserves for the Anne of Green Gables Store, purchaser of Belmont school house for aforementioned Avonlea Village, etc.), I’ve never completely bought into the idea of celebrating Anne through singing and dancing and carrying on.

There’s a solid novel underneath it all, a story that I am happy to have my adoptive province hang its tourism hat on. But I only lasted through half of the other Anne of Green Gables musical before I had to leave from the sheer frivol of it all. And all I knew of Anne & Gilbert was Oliver – perhaps the Island’s biggest fan of Anne musicals, as it ironically turns out – belting out “You’re Island, You’re Island, You’re Island through and through” for several weeks after returning from the old Summerside-based production.

Now that we’re a week in to a season of 134 performances – 8 shows a week from now until October – I am happy to report that all the dread was for naught.

And it is slightly distracting to have your office break out in applause every 5 minutes (although, if you’re distracted and forget where you are, it can enliven the soul too).

And there are a couple of numbers where it seems (I haven’t seen the show yet, so I’m guessing) the entire cast is jumping up and down, an act that makes the building shake.

But, otherwise, it’s really all quite delightful.

It turns out that I’m actually quite keen on many of the musical numbers. Indeed I can sing lines from many of them by heart now, and, as Oliver can attest, have been known to belt out “Anne of Green Gables loves Gilbert” at the top of my lungs while driving around town.

And, above anything else, there’s a tremendous energy in the building. The staff at The Guild have a new sense of purpose. And there are happy people singing and dancing and carrying on every day. Which turns out to make not for an oppressive workplace but for a more creative one.

At least that’s the theory so far.

Anne’s presence in our midst has had additional implications, as the basement space where my Golding Jobber No. 8 letterpress is based has been transformed from a seldom-used arts education and screen printing studio into an oft-used costume shop and dressing room for the show. Where once was a pressure washer for cleaning screens, there is now washer and dryer to launder the costumes; where once children’s art supplies stood you will now find wigs and suspenders and leather shoes.

To the enormous credit of The Guild, I wasn’t evicted: the letterpress still has its little corner, with enough space cleared around it to allow me to work. 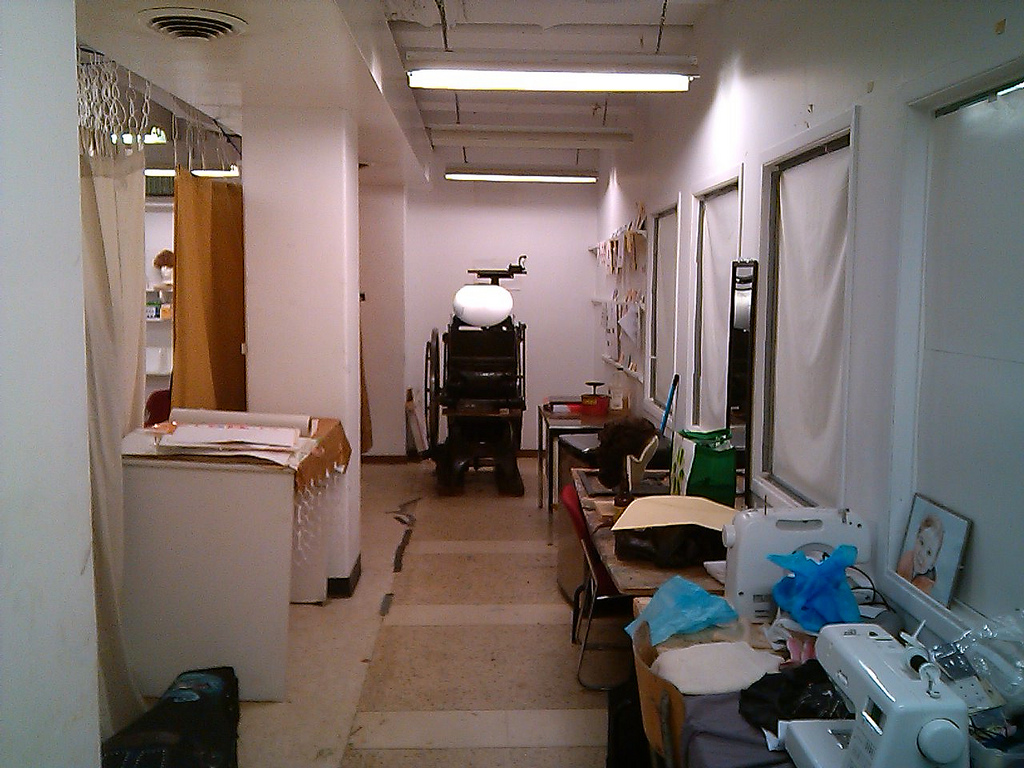 What’s been restricted, however, is the time available for me to do so. Running a 97 year old, one ton iron machine is incompatible with the needs of Anne and Gilbert switching costumes, so I have to squeeze in printing time around the showtimes (yes, there’s an app for that). But even in that there is a silver lining, as having only a very few times during the week where I can print, instead of “any old time,” turns out to be the call to action I need to get me back into the shop.

So, at least at this hour, with a few weeks done and more than 3 months to go, living with Anne of Green Gables turns out to be a turn for the better, not an occasion for despair.

(And you should really come and see the show; I’ve not seen it myself, as I said, but I’ve heard it more than anyone outside of the cast, and it’s impressive!)