The other night I found myself on the couch with Oliver around bedtime needing something to read as a bedtime story (the heat and humidity sapped my ability to make up another original “Yarky the Yak” story). I found my iPod Touch within arm’s reach — and important criterion — and fired up the Stanza e-book application, poked around for a while and finally ended up downloading the Project Gutenberg version of Anne of Green Gables. Two minutes later we were learning about that busybody Mrs. Rachel Lynde. 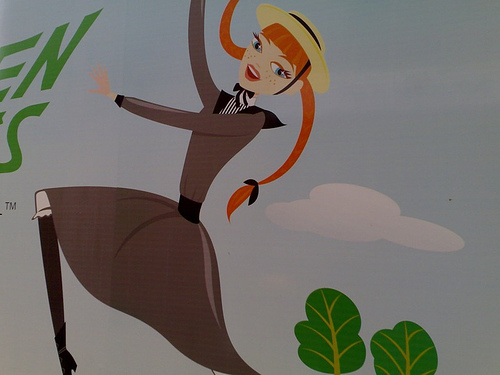 Having lived in Prince Edward Island for 16 years, I’ve had a significant exposure to the Annedustry (a term I believe I have just coined).

It’s difficult to avoid. I live 500m from Anne’s nightly musical rampage.  I used to work for the Anne of Green Gables Store as a product developer (my great accomplishment was developing a line of Anne-themed jams and jellies). I wrote the original business plan for what later became Avonlea Village. I used to advise the Anne of Green Gables Licensing Authority on domain name issues. I’m the president of the L.M. Montgomery Land Trust, which has a missing of preserving the heritage landscapes the inspired L.M. Montgomery in the first place. Heck, in grade 3 at Balaclava School in Ontario I was in the chorus of the school’s go at the musical.

Me and Anne, in other words, we’re pretty tight.

And yet, in all those years, I’d never actually sat down to read the book.  Until this week. And you know what? It’s pretty good.

Of course we’re only two chapters in — last night at 11:00 p.m. Oliver couldn’t sleep and so I pulled Matthew Cuthbert is surprised out of my pocked to calm him down — but Montgomery obviously has a way with the language, and Prince Edward Island does come off looking pretty good:

They had driven over the crest of a hill. Below them was a pond, looking almost like a river so long and winding was it. A bridge spanned it midway and from there to its lower end, where an amber-hued belt of sand-hills shut it in from the dark blue gulf beyond, the water was a glory of many shifting hues — the most spiritual shadings of crocus and rose and ethereal green, with other elusive tintings for which no name has ever been found. Above the bridge the pond ran up into fringing groves of fir and maple and lay all darkly translucent in their wavering shadows. Here and there a wild plum leaned out from the bank like a white-clad girl tip-toeing to her own reflection. From the marsh at the head of the pond came the clear, mournfully-sweet chorus of the frogs. There was a little gray house peering around a white apple orchard on a slope beyond and, although it was not yet quite dark, a light was shining from one of its windows.

It’s easy to be snide about Anne and the narrow lens through which an Anne-centred tourism industry casts Prince Edward Island. But it’s important, I’m learning, not to cast out everything Anne as kitsch either.

I moved to the Island just a few months ago, and laughed out loud at a radio story about a plan to market PEI-raised beef to the Japanese as Anne’s Beef.

Hear, hear. I love Montgomery’s books, and I’m a 38-year-old man — hardly the tween/teen girl demographic. What I enjoy most is her keen eye for personalities. Montgomery’s characters have real quirks and foibles that I recognize either in myself or in others. Also, as in the passage you quoted she writes memorably and evocatively about the beauty in nature.

You might like her journals, Peter. After she married, she was “the minister’s wife” and felt unable to express her real feelings in public. Her journal became her way to blow off steam, and as she never suffered fools gladly there are some biting characterizations of people that made me either laugh out loud, or wince at her written eviscerations.

I couldn’t agree more. I have heard so many Islanders sneer at the mention of Anne’s name, yet when I ask them, none of them have read any of Maud’s books. They have no idea why she was so great!!

There are many reasons that Maud is so celebrated around the World — she was an amazing writer! Too bad the Annedustry fogs our vision. I think it’s a shame.