I am a big fan of the window fan: our 189 year-old house is pretty good at keeping cool in the day if you fill it with cool air overnight, and 2 or 3 strategically-placed window fans have, for the last 16 years, been enough to do the job. 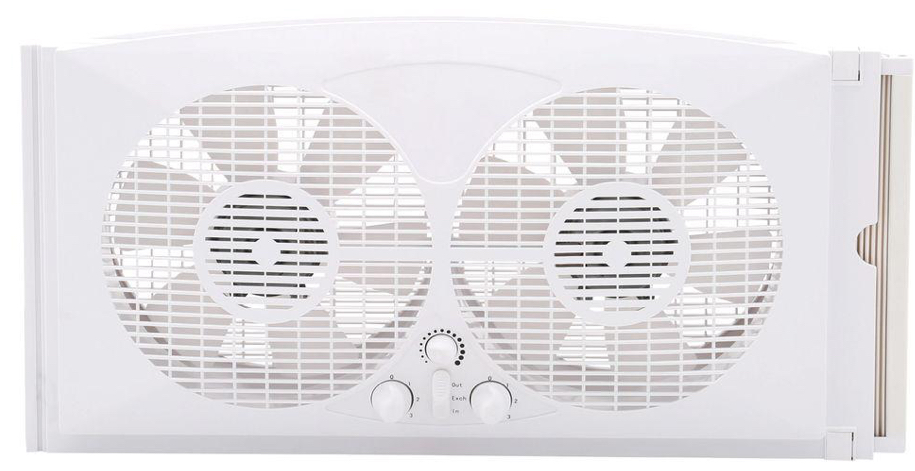 I last purchased fans about a decade ago and, if memory serves, they were plentiful in local stores, with several different models. We were well-served by our fleet of fans until this year when, all at once, they disintegrated before our eyes, riddled with mold and mildew and with various plastic bits and bobs falling off. It was time to replace them.

My first stop was Home Hardware on St. Peters Road: it’s close by, the staff are friendly, and they generally have a good product selection.

I picked up a couple of 3 Speed/3 Fan Thin Window Fans from Bionaire, based on its thin profile and claims of “40% greater air velocity compared to similar window fans.” I installed one in Oliver’s room and one in our bedroom and left them running full-tilt overnight.

I was not impressed. I’m not sure what the “40% greater air velocity” claim is relative to — perhaps it’s simply relative to other “tiny 3-blade window fans” as opposed to being relative to “other window fans” — but the airflow was depressingly tepid compared to our old fans, and our room was almost as warm as it would have been if we’d had no fan running at all.

So I returned those fans yesterday and exchanged them for the 2 Speed 2 fan 7” from Honeywell, the only other model they sell. I reasoned that because this model had a similar form-factor to the old set, we’d get similar performance (I also saved $46 in the process, the difference between the price of the Bionaire and the Honeywell).

The Honeywell model was, alas, also a big step down from what we’ve been used to: two speeds (as opposed to three), uni-directional (the old fans had a “reverse the fan direction switch”), not nearly as powerful and, most concerning, with the “accordion wings” that used to adorn every model of fan replaced with cheaper and less flexible plastic sheets.

This last factor was a deal-breaker in this case: the fans simply wouldn’t fit in our windows, as with the “fins” installed they were too big and without the fins installed there were gaps.

So I returned the Honeywell fans this afternoon, thus exhausting our options at Home Hardware.

Next step was Canadian Tire, where we’d purchased all of our previous fans.

Nowhere was the seeming transition from window fans to cheap air conditioners more obvious than in aisle 29 in that store: they now sell a single model of 7” window fan, made by Likewise, and it was lost in a jungle of air conditioners of various formats. I don’t need my air chilled: the earth already does that for me; I just need the chilled air moved inside, so there’s no reason to get an air conditioner, despite prevailing trends.

I didn’t even bother with the $37 Likewise: we took one out of its box and found it cheaply constructed and similarly limited in functionality. We left Canadian Tire empty-handed.

After a quick stop for an cold brew coffee we ended the afternoon at Home Depot where the only model of window fan in stock was the 9” Twin Window Fan. I was impressed by the size of the blades — surely 9” blades will move more air than 7” blades — and this model seemed to have all the features we were looking for (accordion-style fins, reversible motor, 3 speeds).

The only problem was that they only had a one, and I wanted two.

Just before giving up, I noticed that there was a fan mounted to the wall as part of a fan display. I tried to find a staff person to see if I could buy it off the wall, but I couldn’t find one. Noting that it had a price tag on it, which to my mind makes it “for sale,” I slipped it out of its mounting bracket, grabbed the one in the box, and headed to the self-checkout where the robotic cashier happily let me purchase it.

As I write the fans are in the trunk of our car waiting for installation tonight. I shall report back on the results.

And how did the new fan choice turn out?

What's the verdict on the fans?

and where's a good place for cold-brewed coffee?

Although I avoid Starbucks in almost all other regards than airport travel, their cold brew coffee at the new drive-thru location in the Staples parking lot has become a summertime “oh my it’s hot and I need a coffee right now” destination. You have to put up with the burnt-to-a-crisp Starbucks roasting profile. But it hits the spot.

If you have a little more time, and want some alternative cold-coffee-excitement, they make an interesting more slurry-like cold coffee with ice concoction at Owl’s Hollow.

Being an ACK, I must say thank you.

I should also mention that Casa Mia has started keeping cold coffee in the fridge for hot summer days, so you can go there and ask for a simple “iced coffee” and you can get it, at your option, pleasantly ice-free, so as to avoid watering down. It’s not cold brew, but it’s very good.