Back last year at the tail end of my trip to Copenhagen for reboot, Nikolaj Nyholm and I took a walk in a park and he related to me his new involvement with a bunch of brilliant image processing minds. That “involvement” eventually became a living, breathing project, termed Polar Rose.

The company’s task is to develop applications that will “give meaning to digital photos and allow these to be indexable just like text documents on the web are today.” In its simplest form this means “automatically figuring out who’s in photos.”

After a long development ramp-up, Polar Rose launched a private beta of the current version of their web-based system today, and after a bit of ego-surfing to web to locate photos of myself, this is what it looks like: 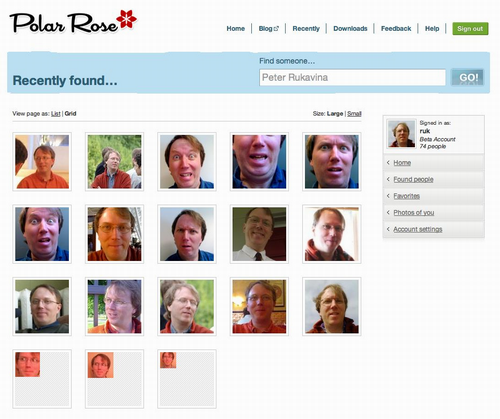 In its current incarnation the Polar Rose beta is built around a Firefox plug-in that, as you browse the web, sticks a clickable icon on top of any image where it can pick out a person’s face. At your option you can click on the image and provide the name of the person it has identified. This data gets sent to the Polar Rose server where it joins their index of “who’s in photos.”

Ultimately — although not yet in its public form — their technology will be able to automatically identify people in photos using the clues it has obtained from previous human-submitted identifications.

Obviously this has some significant implications for privacy. For some people it’s problematic to have anonymous photos of themselves on the web, let along ones that can be Googled. In this blog post from last December Nikolaj attempts to address some of these concerns. This is certainly an ongoing issue, and one they’ll have to be ever-vigilant about addressing as they move forward.

As with other self-inflicted wounds against my personal privacy (see Plazes et al), I think it’s important to dive headlong into experiments like Polar Rose precisely because of the privacy implications of the technology. I don’t want Wal-Mart to be able to auto-tag me as I roll in the front door, but you gotta imagine that it’s coming soon. To say nothing of CSE and their ilk.

At the very least I want to have some personal familiarity with the technology terrain before this happens so that I can understand what evil can be wrought against me; otherwise I’m just a naive sitting duck.

All that said, the technology that underlies Polar Rose, when it’s working full tilt, is one of those things that will appear tantamount to magic (it’s already pretty magical that it can figure what’s a face and what isn’t). In other words, it’s pretty cool.