So our friend G., who likes to stay well behind the technology curve, up and bought a DVD player this afternoon. They cost less than $30 now, and he was finally ready to take the plunge. In doing so he managed, at the same time, to completely miss the complicated “video tape” era altogether, thus saving himself years of waiting for tapes to rewind.

As it turns out his television is from the 70s, or at least the 80s, and is missing the interface required by modern cheap DVD players, so we had to head out to Wal-mart and invest an additional $22 in a little box that bridges the gap (kudos to Wal-mart staff for being helpful and knowledgeable). So now he’s got lots of wires running around the room, but he can rent DVDs.

Which is how we ended up standing in front of this thing at 9:30 p.m. this evening: 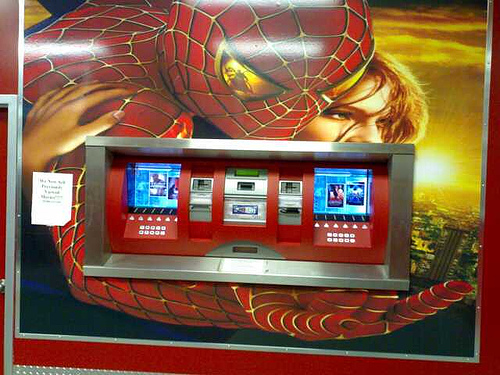 This is a robotic DVD dispenser, recently installed under a “Niko Video” banner, in the little plaza behind Source for Sports on University Avenue. Once you sign up for an account (you just need photo ID), and add some money (minimum $5) to a stored-value card, you can use the robot to rent DVDs 24 hours a day.

Besides the “no interaction with artificially peppy Blockbuster kids” benefits that the faceless robotic system affords, their prices are cheap and you can rent for as little as six hours ($1.83).

The whole “six hours” thing is a little deceptive: it seems like an awfully long time, but when I brought Proof home I realized that I had to have it back before 3:00 a.m. to make it under the 6 hour window. Even 12 hours — the next plateau — would leave me with 9:00 a.m. Still, it’s nice to have the choice, and you don’t need to decide your rental window when you rent — the robot just adds it up and deducts the appropriate amount from your account when you return the DVD.

The robot isn’t completely in control, actually: the new account process involves real human interaction (humans present until 10:00 p.m.) and, in fact, it helped to have said human around to explain how to interact with the robot, which is a little complicated and could use some UI work (i.e. the button you press to scroll “down” actually points “up”).

No word on what G’s first rental will be.

Granted it’s not that close to where you live, but have you rented at That’s Entertainment? Locally owned (as far as I know), socially responsible (they do some great donation stuff), cheap prices, and open late into the night every night. Plus, unlike the robot, their staff (who are generally not peppy Blockbuster animatrons) are knowledgeable and helpful. The staff have great suggestions on a special shelf and their selection of foreign and indie films is very good. They also easily have the best selection of video stores on the Island, although I don’t know what the robot has in it’s catalogue.

To continue the ‘get good service here’ thing: There’s a young chap at Box Office in Cornwall (locally owned, socially ??) who can frequently be found at the counter — I wish I could think of his name, this [ ] would be a good place for it. Anyway, you walk in, shoot him a cheery smile, get one back, tell him what mood you’re in, and 9 times out of 10 he’ll hand you something you’ll enjoy. There are lots of good places to rent movies and I haven’t the slightest compulsion to go to any of them because of the service I get here.

Yes, That’s Entertainment is a good place to rent videos.

Too bad G didn’t see the deal at That’s Entertainment — its something along the lines of pre-pay for 10 rentals and get a dvd player for free — which really does ring home how cheap dvd players have become.

Have you noticed that on some of the screens, you can actually see some of the HTML and javascript in the background? I thought that was kinda odd.

Strange how many business models we have going at once—theatre, videos for sale, video store rentals, premium cable, pay-per-view cable or satellite, netflix rental, robot rental and paid Web downloading. Are we a leisure based economy or what? I suppose not all of these are long for this world. The only rationale I can think of to persist in delivering by disc is if they make it easier to secure movies or to track illegal copying. Everybody with a phone line ought to be able to download the binaries pretty soon…unless this net neutrality thing plays out badly.