An item in my weekly Air Canada email newsletter caught my eye this morning:

This is all very well and good, but it would be helpful if the newsletter actually told us which new terminal Air Canada is moving to tomorrow. There’s information on neither Air Canada’s nor Logan Airport’s website about the change, and it took a call to the airline’s toll-free number to find the answer: they’re moving to Terminal B.

For those of us who fly in and out of Logan on Air Canada a lot, this is a Big Change. Their old home at Terminal C was moribund once you got through security, with a tired old Burger King as the only restaurant and a couple of cramped waiting rooms. The indignities of Terminal C were compounded by the fact that Air Canada moved there from the forever-being-renovated Terminal E just as the renovations were completed. Terminal E’s departure lounge had sushi and rocking chairs.

We flew out of Logan’s Terminal B last year on US Airways on our way to Dublin, and I recall it is being a might better resourced (and much brighter looking) terminal. I’m due to head south sometime this season and I’ll report back on what Terminal B means for Air Canada passengers.

By the way, Terminal E, the international terminal at Logan, is to be renamed Terminal D sometime this year; the gates at the old Terminal D were amalgamated into Terminal C last year.

In other Air Canada news, here are the special webSaver deals from Charlottetown for this week: 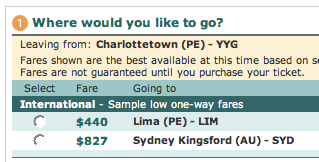 Not that I turn my nose up at travel to Peru or Australia, but it does seem like an odd combination of destinations to put on sale given all the other places in the world they fly. The fares don’t seem that fantastic, either: in classic Air Canada style, they are “sample low one-way fares” so if you want to get back from Lima or Sydney you have to double them and add taxes and fees.

And finally, something I missed when it was announced earlier this month: Air Canada is starting up flight from Halifax to New York again. Starting April 1, 2007 they’ll have a daily flight, on a 50-seat CRJ, leaving Halifax at 11:45 a.m. and arriving New York LaGuardia at 12:30; the return flight leaves LaGuardia at 1:00 p.m. and arrives Halifax at 3:40 p.m. The late-morning departure should mean that it’s possible to string together flights to LaGuardia from Charlottetown with a change of planes in Halifax with little problem; and indeed a look at the schedule for April 1 shows this to be true:

Looking at some sample fares for April, it looks like the YYG to LGA return fare will be about $575 with all taxes and surcharges in. Oddly, it looks like it’s almost always cheaper to fly to New York via Toronto, Montreal or Ottawa than it is to fly via the new Halifax flight; seems you can save about $50 this way.

Why don’t you use environmentally sustainable transport for all of your travelling? Take Acadian Lines to Sackville, NB and VIA Rail to Montreal, Amtrak to Albany and then Boston and up to Durham, NH…. Or take Acadian Lines directly to Bangor, switch to Concord into NH…