We spent a couple of days in downtown Porto at the end of this week.

Yesterday all three of us made a late trip in, taking the 502 bus all the way from Matosinhos into the Bolhão station. While the bus started out empty, by the time we got to the centre of Porto we were packed in like sardines and it felt good to get out of the can.

We wandered into the Mercado do Bolhão, and then grabbed a coffee, tea and hot chocolate (regular readers will recognize the drink assignments) at a small place called Deu 4 Deu around the corner. As it turns out, we missed the famous Majestic Café by just a block; we passed it as we made our way towards the river: 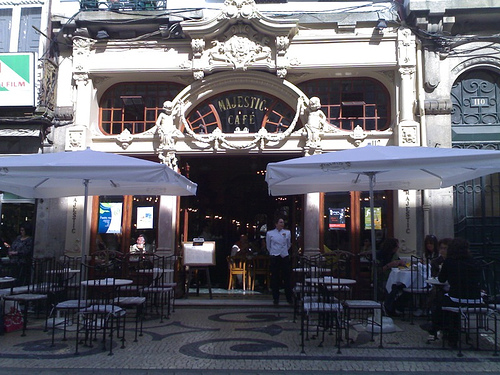 We didn’t mind, though, as the waiters at Deu 4 Deu were very nice, and accommodated Oliver’s eccentricities well.

We then walked up to the Funicular dos Guindais, which runs down the hillside to the Douro. When in Porto, don’t miss the opportunity to take this Funicular; it’s only a regular transit ticket fare, and the view is spectacular and the ride harrowing. At the bottom of the hill we found ourselves directly under the beautiful Ponte Luiz I: 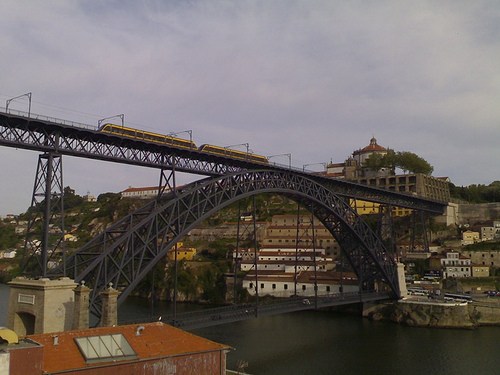 Of course we also found ourselves at the bottom of Porto with a need to get back up to the top. We thought we had it made when we found an elevator that, for 1 EUR each, took us all the way to the top. Unfortunately this was some sort of trick elevator that didn’t actually allow one to get anywhere once at the top. Other than down. So we ended up walking halfway down the side of the hill again, and then through a large road tunnel into the lower part of the city.

Then it was up the hill again to the Metro where Catherine and Oliver rode all the way home and I diverted to buy clothes for Bob (Oliver’s doll and mentor) and other sundries at Norteshopping. We were all exhausted by all the up and down and slept well.

This morning Oliver and I headed out into a drizzly morning towards the Matosinhos Public Library. Unfortunately by the time we got there at 13h it was just closing, but we had an excellent snack at the library café on the mall (libraries here seem to have bars and cafés built in as matter of course; this is a Good Idea).

We then made our way through the almost-rain to the Metro, and rode back into the downtown hill country. This time we walked up the hill from São Bento station; on our way up, Oliver took the hand of a passerby. Said passerby, while initially shocked at the offer, was delighted by the Oliver, and proceeded to walk hand-in-hand with him all the way up. At the top we said our good-byes and then happened upon the wonderful Livraria Lello bookstore, an art deco paradise, and perhaps the nicest store I will ever be inside in my entire life: 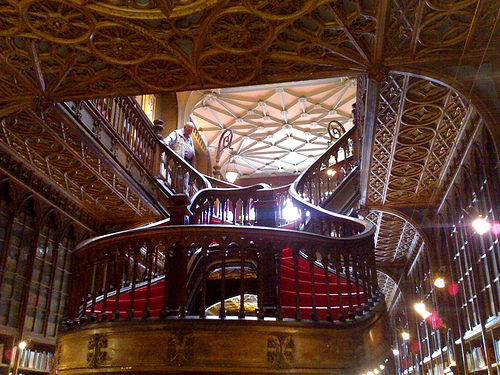 I felt a strong obligation to buy things from them so as to offer my support to the beauty they maintain, so we spent 30 minutes browsing and walked away with a good selection of Portuguese childrens’ books.

We continued “down-river” through various interesting alleys and squares, eventually taking a very, very steep hill down towards the water. Halfway down the hill Oliver announced he had to pee; normally this would, hidden inside the rabbit warren of an old downtown as we were, present a grave problem. As it happened, however, he announced this exactly as we walked by some sort of city-run community laundry, shower and washroom facility. It was beautiful, clean, and just what we needed. 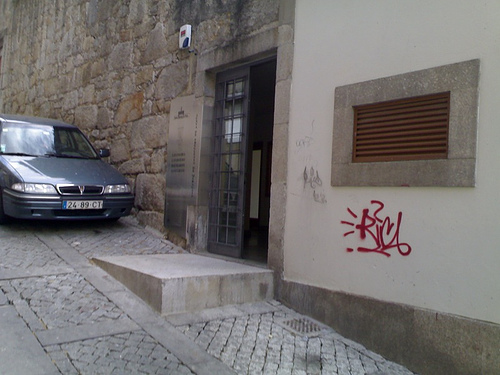 Sated, we continued down to the river where we caught the antique electric trolley down-river until its terminus where we hopped on a convenient bus 500 that took us right back to Matosinhos Mercado, by way of the stunning oceanside road.

As on Friday, all the up and down took it out of us, and as I type Oliver and Catherine are fast asleep. Oliver and I plan to get up tomorrow morning and make it into the Hotel Ipanema Park for 11h for a free showing of Stuart Little. It will be a miracle if we make it.

Wow. These are great photos. It looks like you’re having a good time.

wow, that is such an incredibly beautiful staircase.