At the last meeting of the PEI Electric Vehicle Association there was talk of how, at some point in the future, we’ll have a “smart grid” on Prince Edward Island, with electricity rates adjusted to match supply and demand, so that, for example, our electric vehicles can charge themselves when demand is low and we’re generating “green” electricity.

There are innumerable things that have to happen before our electricity grid can support this, both regulatory and technical. The electricity meters in our houses, for example, are “dumb” meters and would have to be replaced with “smart” ones that could communicate in real time with the utility.

A lot of the talk about smart grids is based on the assumption that we need price signals to modify our behaviour; while that may be true, it ignores the fact that some people will seek greener opportunities simply from altruism.

And, it turns out, we have all the tools we need right now to build an “altruistic smart grid” ourselves. 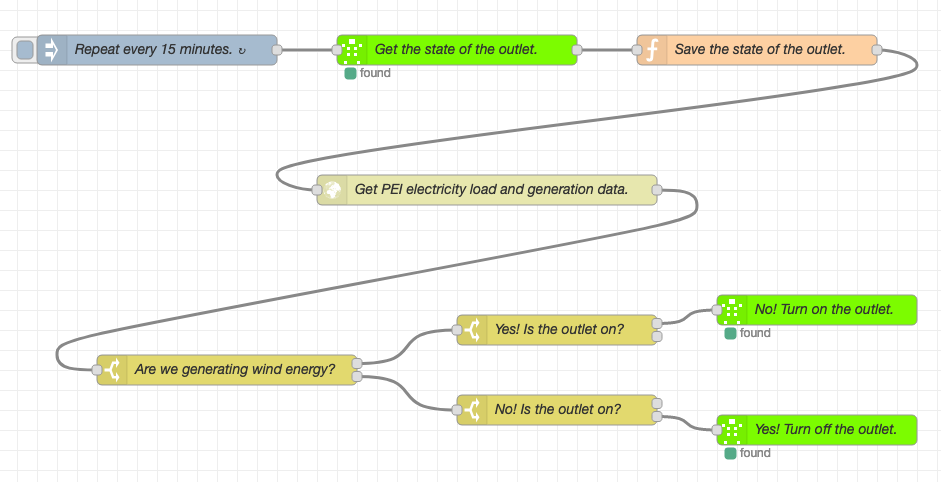 This is a computer program (technically a “Node-RED flow”), running on a tiny, inexpensive Raspberry Pi computer, that turns a Wemo power outlet on or off, depending on whether we’re generating “green” electricity on Prince Edward Island. I built it so that I could charge my mobile phone only when we’re generating green electricity.

It works by doing the following every 15 minutes:

First, it looks to see if the electrical outlet is on or off, and remembers this for later.

Next, it looks up the current state of PEI’s electricity load and generation from a system I created that returns a chunk of data that looks like this:

The “percentage-wind” figure is the percentage of PEI’s current electricity load–”how much electricity we’re all using right now”–that’s being generated from wind power.

I arbitrarily decided to call “more than 50%” green electricity.

If we’re generating more than 50% of our electricity from the wind, and the electrical outlet is off, then it gets turned on.

If we’re generating less than 50% of our electricity from the wind, and the electrical outlet is on, then it gets turned off.

The parts to assemble this–a Raspberry Pi, a Wemo outlet–cost less than $100.

Because the “smart” in this DIY altruistic smart grid are programmable, this is only the simplest version of how such a system might work: I could, for example, enhance the system to look at the current state of my phone’s battery and to override the green energy requirement if it dips too low. Or turn off the switch when the phone’s battery is fully charged.

Here’s the complete flow, ready for import into Node-RED, should you wish to try this at home.

Interesting. My immediate thought is that I would need to charge my battery powered devices during the times when I’d least likely to have green power - at night when I’m asleep. Because I’d need a fully powered device to make it through the day.

We are fortunate here in PEI to often have excess wind energy in the grid in the overnight hours, at least in the winter time when there’s a lot of wind energy.

Of the 2,413  days I’ve been archiving load and generation data, there have been 1,998 days where we’ve had at least part of the day with more than 50% of electricity being generated from wind in one 15 minute measurement window.