When I was 10 years old, in 1976, I had a radio in my bedroom that, in addition to receiving on the regular AM and FM bands, also picked up the audio of TV broadcasts. And so, perhaps unbeknownst to my parents, I would often go to sleep with the radio under my bed, a single earphone running up to my pillow, listening to whatever TV show it could pick up.

The show I remember most was All’s Fair, a politically-themed sitcom starring Bernadette Peters and Richard Crenna. What’s most remarkable, looking back, is that I never actually saw the show on a television: I only listened to it on the radio: I had no idea what the actors looked like, or where it was set. And, at 10 years old, I likely had little idea of the dynamics of “she’s a liberal, he’s a conservative” relationship at the core of the plot. But I was, nonetheless, a regular listener. 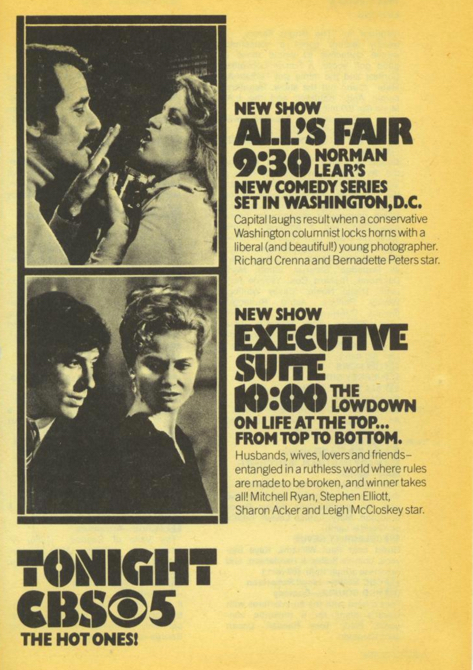 The show only lasted a single season; apparently it wasn’t remarkable enough to others to have made it into syndication or a Netflix revival as other shows of that era have. The only video evidence of the show that survives digitally is the opening credit sequence on YouTube: