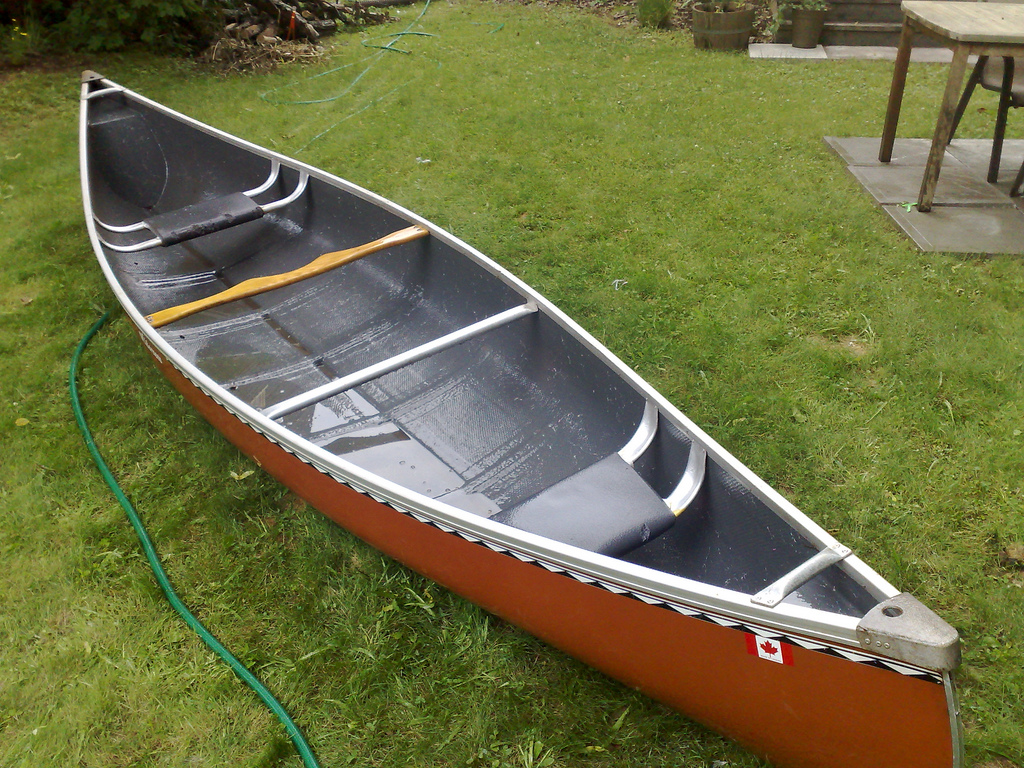 About a decade ago, back when Catherine and I had no Oliver, and thus had surplus time on our hands, we bought a canoe.  It is a nice canoe – nothing extravagant, but enough to knock around in the waterways of Prince Edward Island in.  We did not canoe extensively during our footloose time – a few trips in the West River, a rather bizarre attempt, with my brother Steve, to navigate the Morell River, and an unfortunate outing into the North River in the area surrounding a sewage outflow.  But we always had high hopes.

Those high hopes were diminished somewhat when Oliver arrived and our surplus time disappeared.  When Oliver was 3 years old we made some attempts at resurrecting our canoe lifestyle, but our initial personal flotation device trials resulted in a face-down-in-the-water Oliver, and so we were scared off.

This week, though, with summer speeding by and Oliver’s childhood advancing, I resolved to reapportion some of my summer time to getting the canoe up and running again.

We started last night with a trip to Canadian Tire and the purchase of a wee paddle and a new PFD, followed by an hour-long session in the CARI Pool to insure that the PFD actually worked (it did!).

Tonight I dragged the canoe out of the carriage house, hosed it off, and assessed the wear and tear of 8 years among the skunks, cats and raccoons (in general, not to bad: some animal attempted to eat the styrofoam seats, but not too much damage was done, and the craft remains seaworthy).

Next on my list tonight: find a way of affixing the canoe to the roof of our 2000 VW Jetta.  When we first bought the canoe, Sporting Intentions sold us a $20 kit of nylon cord and styrofoam blocks that snapped on the canoe’s gunnels; they served us well, but were eaten by the aforementioned animals in the interim so needed to be replaced.

Alas I’ve had no luck replacing them: there are plenty of kayak carriers in the stores of Charlottetown, but nobody but Sporting Intentions sells canoe carriers, and they’ve “gotten away from the styrofoam system” and all they have to offer is a $400 Thule system that, while it’s beautifully designed and snaps right into the Jetta, is overkill for what will likely be a weekend outing or two this summer (I should add that the Sporting Intentions salesperson was super-helpful, both in selling me on the virtues of the Thule, but also in pointing us to good spots to put in).

So as of this writing I’m still searching.  Canadian Tire is selling styrofoam “pool noodles” for $1.99 each and I’m pretty sure I could adapt them for the job, add $20 worth of tie-down straps and have something that would safely get the canoe into fresh water.

Times a wasting and the snow will be here soon, so I’d better be quick about it.

I think the pool noodles would do the job, but you risk them moving and ruining your paint. Sears.ca has the styrofoam block doo-dad for $40. MEC.ca has a model for $48.

Next time you are in New Hampshire for work hit a Dicks Sporting Goods (there is a good one in Keene near of the highway intersection) where you should be able to get a good set of canoe foam pads and associated stuff for under twenty bucks as well as the really good set of ratcheting heavy duty tie down bands for another twenty.

My dad used to take me canoeing all the time when I was a kid, from when I was about 3 on. I had a little life jacket and he made me a wee paddle because all the ones we had were way too big. We mostly did the Morell river, but occasionally we did the dunk as well. Ah, how I miss it! We used the styrofoam thingys too, but I on The Shopping Bags they tested out a variety of car kits. I recall they had an inflatable one that cost, I think, somewhere around $50-60 bucks; you pumped it up, put it on the roof, and voila. I think they said it was okay for shorter trips, not so much for long highway driving. Another place you may want to try is MEC. They started off as a mountain climbing place, but they have an enormous selection of kayaking/canoeing stuff. I love MEC; it’s nice to be able to support a Canadian owned/operated company, and I don’t think I’ve ever had a bad experience with them. Just looking quickly, I found this.&#160 Not a bad price at $48. Their shipping is pretty reasonable, too — I think it’s free after $150, and maxes around $10 for below that.

What if you cut the pool noodles in half to avoid slippage with the round side up?

Walk it down to Peaks Key. That would be a cool site, a guy with a canoe over his head walking down the street. Very urban voyageur.

Get the Thule from Sporting Intentions. You can add to it later with bike attachments.
Worth every cent and no damage to your car.

Man, I feel like an idiot: the first post has the exact same link I posted. DOH!

MEC has some great tips for canoe and kayak transport.

Postscript: I ended up buying four of these blocks for $2.90 each.

The last line of your post had a Garrison Keilor or Bill Richardson kind of feel to it.

Happy adventuring. I cheaped out on even buying the canoe because I wasn’t convinced we’d use it enough let alone the roof rack.

Happy canoeing Peter, I think in the end you made the right choice, the foam canoe blocks work really well and last a long time. Miss you on FB, my friend!