It is a sunny Sunday in Amersfoort, and I am sitting on the tiny third floor balcony of our rented flat, looking out over the back yards of our erstwhile neighbours. Across the way and several back yards up a quartet us hanging their laundry and inspecting their garden; a neighbour two doors down shouts greetings at them, sticking his head out his third floor skylight so that they can hear him.

The clock is ticking down to our check out time at noon, but I am choosing to eke out every minute of peace before we enter into the maelstrom of Amsterdam and then home.

Oliver and I spent two very happy days with friends here in Amersfoort, a gathering catalyzed by our friend’s Elmine and Ton on the occasion of Elmine’s birthday. It is the second time we’ve joined the “birthday unconference” caravan, and even though Tom and Elmine have moved across the country in the four years since we were last here, it feels like coming home.

It seems folly to try to document what happened over these two days (although Frank has done a good job), so I will instead focus on three things that stand out.

The “un” in “unconference” means “there’s no formal program, and there’s no audience: we and us form the program together.” And so Oliver stood up on the stage—a tiny step-stool—and pitched the idea of presenting “Google Home and Amazon Echo and Ring Doorbell and Police Surveillance Cameras.” He received an enthusiastic reception, and a time was set on the schedule for him. 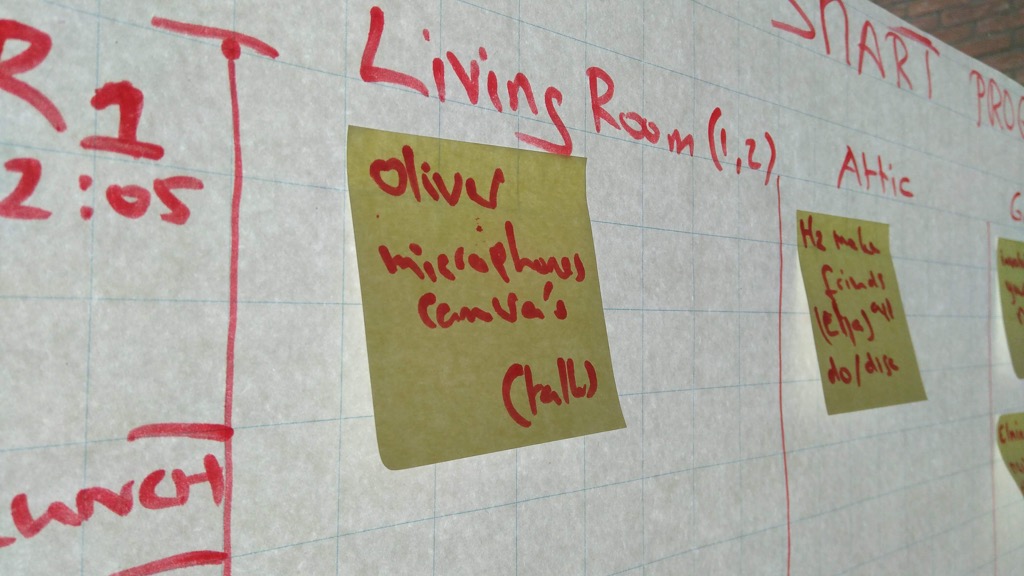 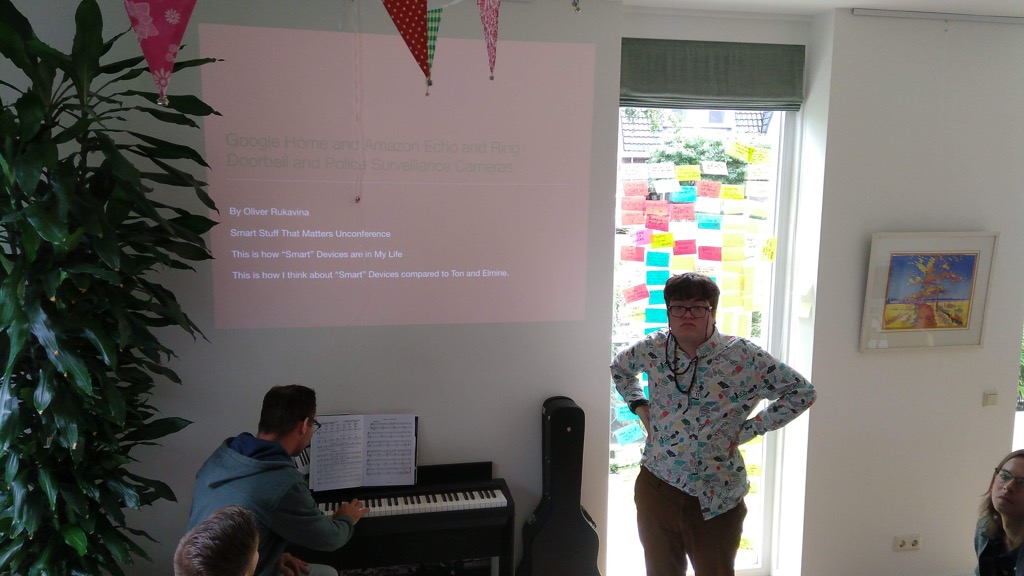 At the appointed hour, with me advancing the slides from the balcony, he presented his slide deck (see slides here) with confidence. The last slide in his deck was “do you have any questions for us?” and this then precipitated 45 minutes of rousing discussion on privacy, access, streaming music, and home control. I was very proud of him: the initiative was entirely of his own doing, he crafted his slides on his own, and got himself on the schedule through his own will. He is becoming a force in the world, and that is awe-inspiring to see.

The second highlight is an event that preceded Oliver’s talk, the “icebreaker” part of the day that led things off. I have always dreaded the “everybody introduce yourself” part of meetings, especially meetings of diverse people whose lives inevitably seem much more interesting than my own; this, thankfully, was dispensed with, and instead we were prompted to gather with people we didn’t yet know and to talk about our best and worst moves in life.

What proceeded from this simple prompt was a rich discussion of what it’s like to live as an expat, how difficult it is to make friends as an adult, and the power of neighbourhood connections. Oliver and I were in a group with Heinz and Elja and Martyn, and we talked for almost an hour. I have no idea what any of the others in our group do for a living, but I know that Martyn mowed his lawn this week in preparation for a neighbourhood party, that Heinz lives in an apartment block where it’s hard to get to know his neighbours, and that Elja has lived in Hungary, the USA and Turkey, and has the most popular Dutch blog post on making friends. 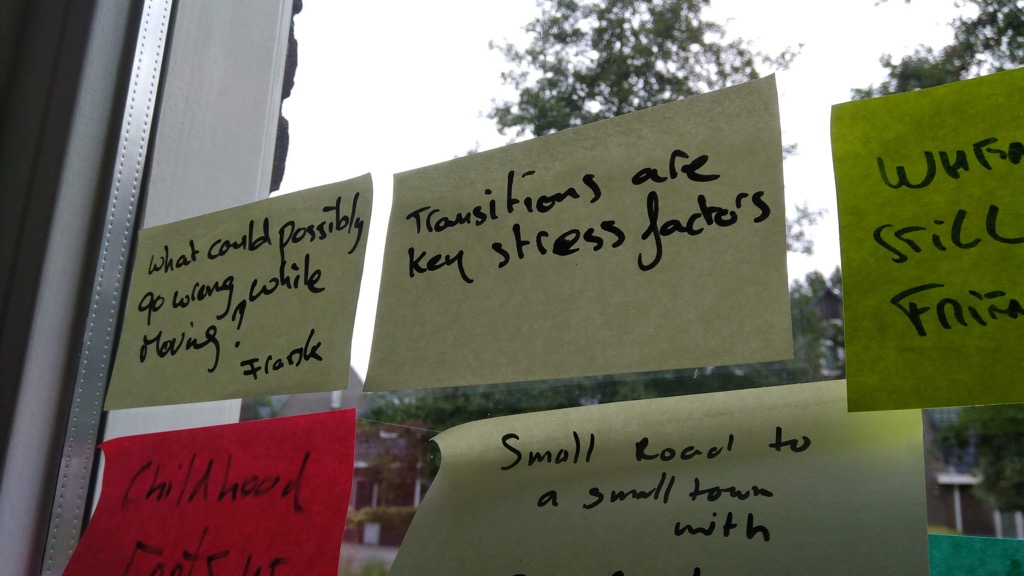 Finally, and most deeply, I appreciated the chance to reconnect with old friends, and to make new ones.

I proposed a session on accessible housing, and through that session got reintroduced to Xavier and Simone, who I’d met four years ago.

Oliver and I rode the train from Berlin to Amersfoort with our friend Martina and this both afforded us a chance to talk more intimately than long distances have allowed, and also provided me with support when the trip took a challenging turn, and I needed someone to bear witness and to seize control over shifting logistics.

Our friend Pedro flew from Indonesia to be here and we instantly reconnected and both picked up the threads of conversations we’d left off four years ago, and shared stories of our more recent sorrows and adventures.

I sat with Johnnie, who I hadn’t seen since Reboot many years ago, on the couch in the living room for a few short minutes before lunch and our chat quickly turned to the joys of participating in projects or discussions or meetings where you have only a casual interest, and thus no hill to guard.

It was a pleasure to meet Frank, who’s joined Ton and me in an ad hoc effort to understand the Indieweb, in person, and to participate in his session on redecentralizing the web; our digital discussion will be so much more powerful now that we’ve met in the flesh.

I got to spend time–not enough–with Lilia and with Robert, also “stuff that matters” veterans from the last round, and to learn of their latest adventure, starting a new company.

Elmine’s brothers, Harmen and Siert, were both there and I got to chat with both of them, and to witness Harmen’s Olympic-level avuncularity with his niece Y., and to hear about Siert’s adventures in 3D fabrication since I heard him talk about RepRap machines at reboot a decade ago.

Ton introduced Oliver and me to Matthijs, the son of a collaborator; he is a dynamic young man considering a move to Canada, and we had a good chat about education, employment, escaping the orbit of your home culture, and what may lay ahead for him. He also gave me an excellent survey of the current state of Android phones, pointing me at models I’d never heard of.

There were almost 40 of us in total, and even more at the Saturday barbecue that formed part two of the weekend, and the chance to spend time with such a diverse and interesting bunch, in the almost-as-if-purpose-built surroundings of Ton and Elmine’s new house, was a great privilege; to have Oliver join me as a partner in the endeavour made it all the better.

The day wasn’t entirely without dipping into the hard “stuff” of “stuff that matters”: Oliver and I constructed a pneumatic tube-based messaging system that allowed notes to be sent to the garden, an activity that provided a way for us to truly to something together, but also to step away from the fray a little. 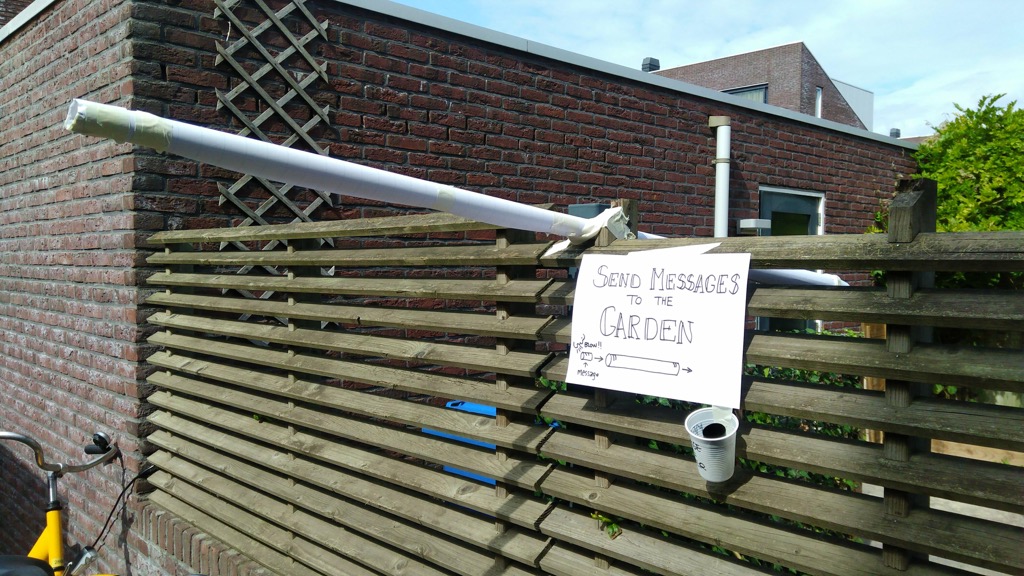 As the night wound down yesterday, and friends and family took leave, we found ourselves the last to depart, leaving Elmine and Ton and Martina and Pedro to recover from the whirlwind and get some sleep.

I took this photo, a little blurry alas, but heartfelt nonetheless, of Pedro and Elmine sitting on the couch; the photo is both a testament to a great friendship, but also a proxy for the feeling that washed over our time here. Ton and Elmine are courageous explorers of new social terrain; I’m so happy to be part of their merry band. 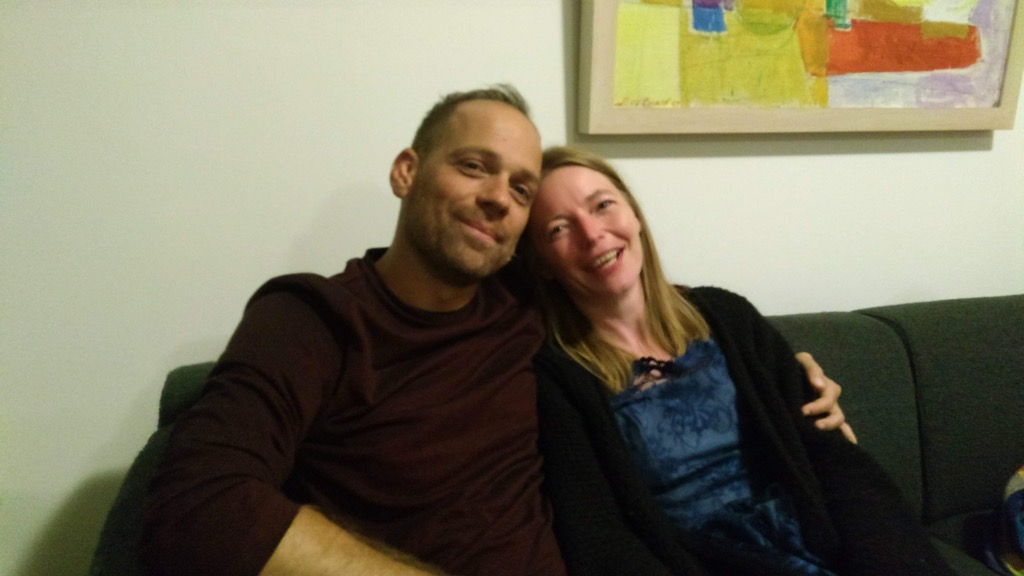 It was lovely to meet you and Oliver. You made the conference even more special for me. Thank you!

Thank you Peter and Oliver for coming to Elmine's birthday conference and party. We loved seeing you and catching up.