Here is the cover of the Aliant local telephone directory for Prince Edward Island released this week: 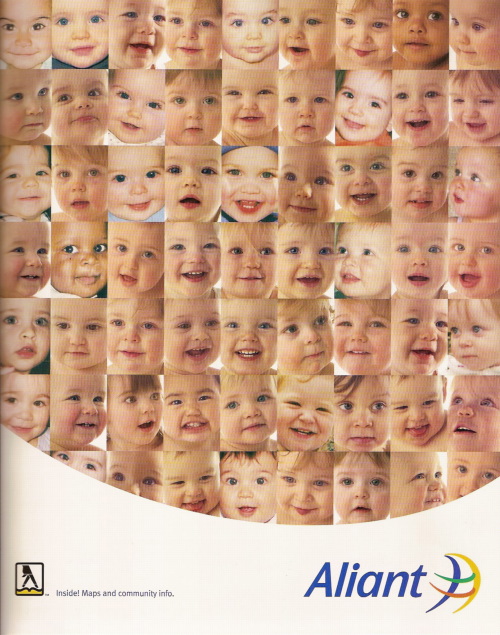 There are 62 babies pictured on the cover; there’s a note on the back of the book that says “All of the babies proudly shown here are children or grandchildren of Aliant employees or retirees.

Of the 62 babies, there are 3 or 4 that could be seen to be “visible minorities,” which Statistics Canada defines as:

The concept of visible minority applies to persons who are identified according to the Employment Equity Act as being non-Caucasian in race or non-white in colour. Under the Act, Aboriginal persons are not considered to be members of visible minority groups.

On the face of it, then, Aliant’s representation of the babies of Atlantic Canada is a roughly accurate portrayal of the colour of the population in general.

I’m interested in what others think about this. I’ve asked Aliant for comment on the actual makeup of their workforce.

I wondered about these numbers. I’ve heard a few people complain about “all the white babies”, but I figured, as you’ve gone on to investigate, that it was a fairly generous representation of visible minorities on Prince Edward Island.

Whats old in new again. IslandTel phonebook cover from around 1989 had a montage of kids which were all palefaces. Letters to the editor ensued, and I can’t remember the outcome if any.

It’s strange to think we are so caucasian and so bland in skintones here.

As a former employee of MT&T (Aliant) I remember it being called ‘the family company’ because so many new hires were relatives of employees.

How strange it must be to have dark skin in PEI and stand out so much compared to everyone else!

Our visible minorities are hyper-visible given their small numbers. I wonder how many french speaking mothers those babies have? Or how many of them will be future Aliant employees?

They sure are cute though, who doesn’t love babies, no matter what colour?

What is the actual makeup of the workforce at Reinvented? Good luck changing it.

I think the statistic should be judged on the percentage of cuteness… ‘cause the baby second from the right at the top is awfully freakin’ cute. You can just see their markerters sitting around the table thinking “hm… everyone loves babies, right?” and they’re right. Are there puppies on the back cover?

Sorry, I think I missed something: What do babies have to do with phone numbers?

Never mind the statistics, that cover sort of creeps me out…

There is something exploitive about it. Kind of like ads that feature animals dressed up in human clothes. I don’t find it cute or funny. And as Oliver said, what do babies have to do with phone numbers anyway?

Is it really that big a deal? You actually took the time out of your day to investigate this further, as to contact Aliant? Did you have an end goal in mind when you did this? Or was this just something you found interesting? Just wondering why and how much time you spent on this?

YOU PEOPLE HAVE WAY TOO MUCH TIME TO COMPLAIN ABOUT THIS!!!
This is a book and it has pictures of babies!!! who cares if it has one more chinese, hispanic, black, white kid than the other!!! Can you still open the book and get a phone number? Does it still contain phone numbers? Get over it. If you call in and wait for 5-10 mins on hold to speak to someone to complain you should find a hobby.

The phone book cover is a keystone piece of Aliant’s marketing and the company’s image. If these baby faces were anything other than those of the employees of Aliant it would be too crass — the kind of thing Michelin or Quiznos would do. Here in the Maritimes, knowing that these are children of the company makes it all down homey and proud. Aliant — the family company. ‘Please don’t strike again, so the baby’s don’t go hungry!’ ‘My phone bills are too high, but I understand you have baby’s to feed’

Humanizing copper cables and billing machine printers with baby faces is clever marketing, the result of highly educated marketers meeting and deciding how best to project a corporate image.

To the Aliant worker: I’ll take all the time I want to complain about whatever I want and I’m sure you’ll match it complaining back.

Aliant babys — exploited from birth — sold out by their sucker parents pride as corporate icons. Nice.

Can’t agree with “aliant worker”… any form of corporate communications (‘specially a public corporation) is fair ball for discussion and besides that, FWIW, the opening comment could be said to be quite positive.

As for the cover, besides being a wonderful idea and easy to look at, it contrasts with other book covers which can’t hold up to the same scruitny. And this year they were actually delivered to _every_ office in my building by a courteous and competent individual.

Aliant’s marketing sucks. Their television ads don’t make any sense. Their phone book covers are completely irrelevant to their business. Their head office and image relations people have gone off the deep end…. They’re a lousy phone company for crying out loud. They are no different than Bell Canada, Verizon, AT&T, BellSouth, Telus, whatever. Oh yeah — I don’t use the telephone or a cellphone and I steal wi-fi whenever I feel the (continually declining) urge to go on “the information super highway”. You won’t get any money out of me — so go down in flames Aliant, and all your corporate ilk!

It looks to me like there are repeats which skews the stats. Aren’t D-7 and H-6 the same photo? G-2 and B-7 as well. A-3 and A-6 seem to be the same baby but different photos. What the heck does that mean?

D7 and B7 are duplicates, probably because the picture is cropped. A3 and A6 don’t look to be the same baby to me. Heck, if you look at this cover for too long, they all start to look alike ;) So it did skew the stats…there are only 60 beautiful babies on the cover.

A-1 is using mind control powers on you, Tracy.

this cover is also the same cover on the new phone book in Halifax.

I have to take a bit of offence at the comments made by one of the individuals on this site….I am very proud to say that my daughter is on the phone book cover. We entered her into the “face of Aliant” contest that was basically a chance for parents and grandparents who also happen to be Aliant employees to show off their beautiful children. My daughter was no “exploited” or “sold out”, I am proud of her….end of story.

Why don’t we try to promote tourism in NB.
Please not the rocks again! Lets try promoting the North for a change, perhaps some little Gem that doesn’t get much attention but deserves it. How about French Fort Cove or Beaubears Island. Didn’t think you knew where they are.
They are both in the same area and absolutely beautiful. Many an artist have captured their quite elegance.
The babies are cute but do nothing to give back to the local business’s that pay large $$$ to pay for ads in your phone book.

Here in Newfoundland Aliant used the babies on the cover as well. I do not believe babies have much to do with a telephone company but oh well i guess the marketing geniuses at aliant have held their cellphones too close to their heads and have come away burnt. Lets hope this years issue has a better cover. Then again it cant possibly get worse can it?

Here in Nova Scotia, the cover is dedicated to the many volunteers that help us. The winning cover design (drawn by a kid) has about 30 kids standing in a group and they are very diverse in that they seemingly are all different from each other except for the fact that every single one of them has red hair (with the exception of the bald RCMP officer and one bald child)and white skin of course….thats comedy…but sad as well. Maybe the kid is Irish and its just a picture of his immediate family